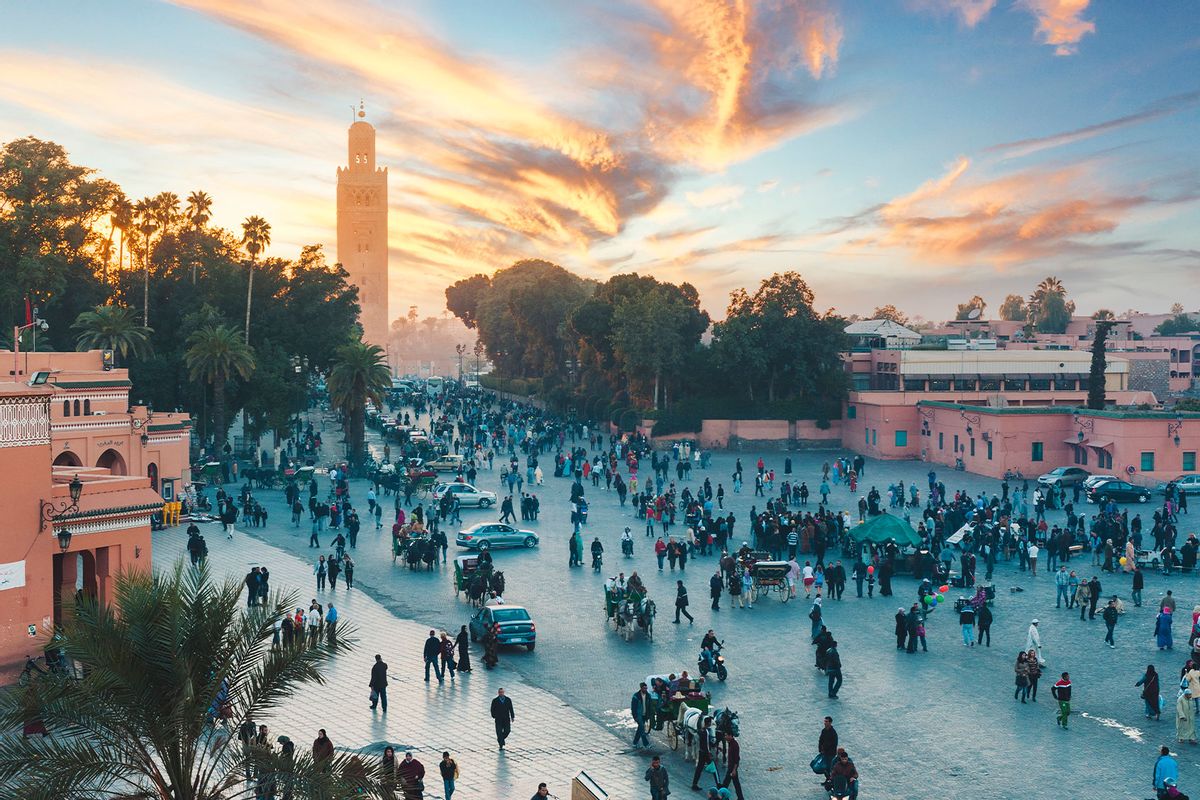 “We were homeless in Marrakech.”

When my daughter first told someone, I shot her in the eye. People knew that we spent the summers in Morocco, but what happened in Morocco should stay there. My kids weren’t allowed to tell anyone—not even their father—about the smoky cafes we frequented in Essaouira, or the time we got stuck on a country road in 100 degrees and had to hitchhike back to Ouarzazate.

In this “homeless” summer, as in all our Moroccan summers, there was another part of the deal – we didn’t travel on the tourist trail. We didn’t make any hotel reservations, nor did we eat at fancy restaurants. Instead, we rented apartments in middle-class Moroccan neighborhoods and bought our groceries in souks, where we could meet our neighbors. We traveled within a budget that allowed us to stay in the country for weeks and sometimes months.

In that particular Moroccan summer, my children were two and seven years old. I was there partly to offer my children a different perspective on the world, but also to do research for what would become my second novel. At the end of each day, in a small notebook, I jotted a few entries under a line I printed in block capitals: WHAT I LEARNED TODAY. Sometimes the entries were insignificant, like when I found the location of the Royal Gendarmerie School in Safi. Sometimes the entries were longer as I spent the day interviewing sub-Saharan African migrants trapped in Rabat without work visas.

RELATED: A carry-on and a personal item

Our temporary homelessness blossomed from this situation that after these interviews we traveled from Rabat back to Marrakech where a VRBO was said to be waiting for us. But when we got to the apartment we found that we had been allocated a closet sized room with a single bed for the three of us. The shared ‘bathroom’, up two more flights of stairs, contained a toilet whose seat hung askew on its hinges and a shower that can easily be described as ‘questionable’.

The VRBO owner’s mother lived on the first floor of the building and she repeatedly asked him, I don’t speak Arabic, why I was traveling without a husband. The apartment was a total no. All of our suitcases and bags were out on the sidewalk, and at the same time I was terrified that I wouldn’t reveal so much in front of my kids. Still, I told the owner that we couldn’t possibly stay. “Please forget it,” I said.

“I have another apartment,” he told me, so we loaded my suitcases and my kids into the back of his small sedan and started driving around the bustling city of Marrakech. I asked him questions as he drove. “Are the rooms bigger?” He said they were. “A bigger bathroom?” I asked. Yes, he told me, although there was no hot water.

It was a minor issue – we were planning to stay in the apartment for five weeks but after all my kids were intrepid travelers by this point, used to cold showers. And the apartment was in a prime location. I was ready to take it until he told me “one thing you might not like: I live in the apartment”. I fought back laughter while fighting back tears at the same time. We spoke in French, which would have been difficult for my kids to decipher without concentration, and they then fought viciously in the back seat of the car, for which I was grateful. “I can’t take it either,” I said. “Just take us to the train station.”

I suddenly felt crazy bringing two small children to a country where I didn’t know anyone and didn’t even speak the official language for two months.

He dropped us and our stuff off at Gare de Marrakech, where I sat for four hours rubbing my temples while my kids ran up and down the escalators for fun. With my dwindling cash, I bought my kids a pizza and two bottles of Fanta at a train station diner. I suddenly felt crazy bringing two small children to a country where I didn’t know anyone and didn’t even speak the official language for two months. Our return flight wasn’t for six weeks. Exchanging the tickets would have cost a fortune.

Finally, as the sun went down and passenger traffic eased, as the gendarmes began eyeing us suspiciously, I gave in and lugged our bags to a nearby Ibis, which was part of a mid-range hotel chain. On the one hand we were lucky. Our problems were mainly logistical. We weren’t the homeless of this country. We weren’t even the homeless of our own country. I could swipe a debit card, albeit reluctantly, and fix everything.

On the other hand, the cost of a hotel was not financially viable for me, not for six weeks. And as my kids jumped and squealed with laughter in the one bed they had to share that night, I knew the place wouldn’t sustain our sanity, not for another six weeks. That evening, my seven-year-old wrote on the small lined page of my notebook. “What did you learn today?” she printed in her clean, young handwriting. She joked gently, but I felt like a parental failure.

I left our tiny room to sit in the hotel’s garden area. The only other person in the garden was a man wearing a white robe customarily worn by Saudi men, sitting alone with a bucket of five beers. He invited me to sit with him and over a drink I shared my plight with him. “I have an apartment to rent,” he said excitedly. “I can show it to you!”

And so began another surreal Moroccan night. I woke my kids and we crowded into the man’s car, where he was blaring rai music, as we made our way to Gueliz, one of Marrakchi’s hippest neighborhoods. And the apartment didn’t disappoint: it had hardwood floors and a sparkling bathroom. “I’ll pick you up at noon tomorrow,” he said, “and you can move in.” I went to bed triumphant. I had long said Morocco was like an abusive spouse. It hit you two days out of three. But by the third day it always, always delivered.

Eventually the receptionist told me I had a call. It was the man in the white robe sobbing into the phone.

Just before noon my kids and I brought down our suitcases. Noon passed. 12:30 p.m. An hour. The hotel staff, who all seemed to know the man in the white robe, looked at me in amusement. I went to the train station and got my kids some more pizza and fanta. Finally, at 1:30pm, the clerk told me I had a call. It was the man in the white robe sobbing into the phone. “My wife died,” he began.

“Six years ago,” he said, and the call got more surreal from there. He offered to come back at four that night, but a voice from the saner part of my mind told him it was fine – we’d figure something else out.

My children are now 12 and 17 and have spent many summers in Marrakech. We ended up finding an apartment that day, and we’ve struggled through a series of Moroccan adventures in the years since, from the time my younger daughter was seriously ill in the Sahara Desert to the time we were all on the bus were dropped off in the wrong city.

And all these years later, in answer to my daughter’s question, I would write that we didn’t learn that we were failures, but that all three of us were tremendously resourceful. I would say we’ve learned that if the three of us stand firm as a family, we can overcome anything. When I say that my children grew up partly in Morocco, I am not exaggerating. The thing is, so did I when I traveled with them.

Want a daily roundup of all the news and commentary Salon has to offer? Subscribe to our morning newsletter Crash Course.