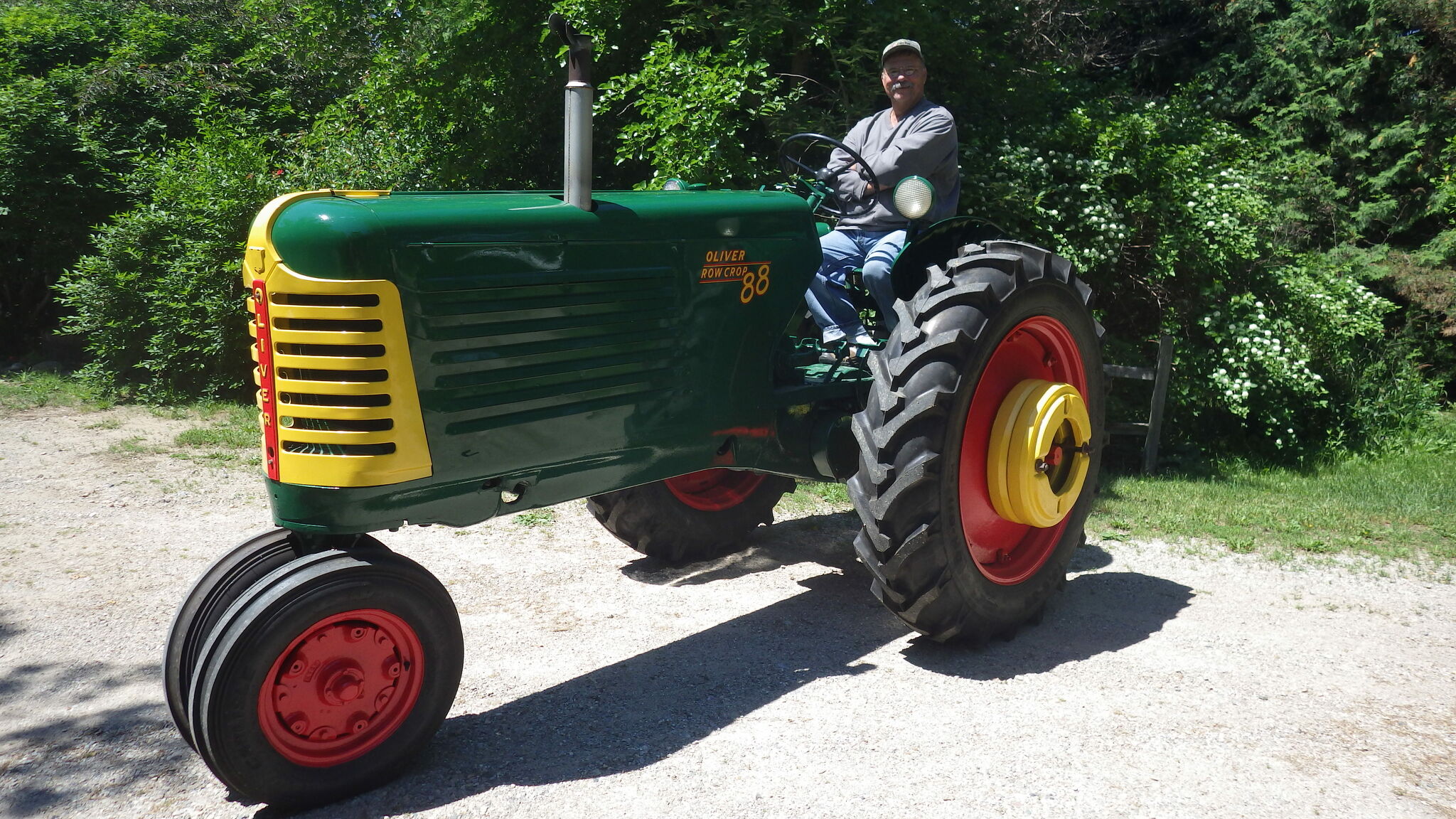 I feel blessed to have grown up on a farm in the time frame that it happened. When I first started going to school (in Gagetown in the mid 1950’s), most of the children in my class were from farming families. At that time there were many small farms from which people could make a living.

I remember we farmed almost 160 hectares, milked a few dozen cows and had 250 laying hens and a large garden. Most of what we ate at a meal came from the farm, and it was certainly a good life. (I miss the fresh milk with chunks of cream still floating in it.)

Of course, the small farms back then didn’t need the large farm implements that you often see in use today. The smaller tractors and implements did a good job in the typically more compact fields. My first memories are of our old John Deere tractor, which my dad had to spin the flywheel to start and actually ran on crude crude oil. It was also quite a powerhouse for its size and was the first farm tractor I’ve ever driven with its hand clutch which came in very handy for a kid when it came time to change gears.

I will always remember wearing a white t-shirt and it was covered in black smudges that would occasionally blast out of the exhaust pipe while the tractor was consuming crude oil.

I think because of my fondness for this old tractor, I was always fascinated to attend the John Deere Days special at the Cass Theatre, an event for which I even got to miss school. I remember my name being drawn during a show and I won a gas pump. As a young child I obviously didn’t see a use for one, but luckily my dad needed one and we started to ponder. I ended up going to a few movies with lots of popcorn afterwards, so I think it was a fair deal that worked out for both of us. Going to the cinema two weekends in a row was a luxury for a farmer’s child.

Our other tractor was a Massey-Harris which did its share of the job including lots of crops (back then before herbicides are like today) and mowing and raking hay. These two tractors filled the bill for all of our farm work needs on a daily basis and I think as the John Deere was getting on in years my father bought a used (1953) Oliver 88 Row Crop which I felt was a good one fairly new tractor (at least compared to the other two). Needless to say, folks, I was absolutely blown away by Oliver.

Which is a good thing, because Oliver and I spent a lot of time (countless hours actually) together on the farm while I was growing up. So much so that for me, feeling the purr of the engine through the steering wheel was like feeling the heartbeat of a living being. In fact, I’ve never spent as much time on a specific machine over the years as I have on the Oliver, which I automatically nicknamed “Ollie”. Depending on the make and model, these old tractors also had their own very unique and distinctive tunes.

My parents ended up renting out the farm and Oliver mostly rested in the tool shed for a while. When my wife Ginny and I bought the family farm 20 years ago we put most of their acreage into conservation programs and old Oliver was put back into regular service. Most of its use is for brushing the hog where it’s required, but it also serves a great and ideal purpose in planting my wildlife forage plots, using the same vintage farm equipment that was used to work it when I was a kid was.

Although the working parts still ticked smoothly, time and extensive outdoor use among many challenging environmental factors had left the Oliver’s exterior looking a little worn (almost sounds like I’m describing myself here too).

So a few years ago, Ollie spent the winter at the Tuscola Technology Center in Caro, where he got a little refurbishment and a damn good paint job. Of course I also had to get new “skins” (tires) to replace the old, very worn and weather tested tires.

Instructor Jason Enos and his bodywork students literally performed magic on my 1953 Oliver 88 Row Crop Tractor. like it had just fallen off the floor of the showroom and reminded me of the first time I saw it as a little kid.

I would drive it home from there, about 15 miles on back roads, and for me it was kind of an epic journey, filled with all sorts of memories. I could still feel the Oliver’s pulse vibrating through the steering wheel as it hummed its special tune, and it was a beautiful, sunny spring afternoon.

There’s something about seeing the world from above (and it was even higher with brand new tires) in a tractor seat and not in a hurry at a leisurely 10mph. You’ll see a lot more this way than when you’re speeding along in a lowered, regular automobile.

We would cross two Cass River bridges on our route. The first had three mallards resting on a log near the riverbank and just beyond that a white-tailed doe was getting a cool drink and her reflection reflected on the river as water dripped from her snout as she watched Oliver and I on the pass the bridge. At the second bridge two white herons appeared and flew not far over my head and I took off my hat and waved to a fisherman wading downstream just a short distance away.

Generally, in the past, whenever I drove the Oliver anywhere, I always had a goal, like drive into a field to do something. That little trip home on back roads made me think I’d been missing out on something all these years. So I do hop on every now and then to do some easy “vintage tractor tours” (on back roads of course) just for fun and I really enjoy showing off the Oliver’s still great looking livery!

Not long ago, Oliver and I got caught in a sudden hailstorm and were pelted with stinging marble-sized ‘slush balls’. Of course, my main concern was the Oliver’s beautiful finish, but fortunately that hail just created a squishy and splashing effect. The Oliver pulled this off with flying colors even though I ended up with a few welts and a fat lip, but it certainly worked for me! I would heal, and fine finishes are hard to come by.

Needless to say, folks, the first time since the refurbishment I was a bit nervous hitching the Oliver to the even more classic Massey Harris double deck plow. I would have been upset if the new paint had chipped or scratched but I got over it quickly as there was a lot to do and ‘Ollie’ is a real work tractor.

The only problem I have now is hitching a really nice tractor to a really rusty old plow. It just doesn’t seem right. Then there’s the old four-row (John Deere) planter and the old hay wagon (which rests on a ’47 Ford truck frame, which I think would look great with the same color scheme as Oliver’s).

Obviously I need to do some restoration and painting (in original colors) of vintage farm equipment in the near future. I feel it might take a bit of getting used to, but I can attest that the end result is very fulfilling!