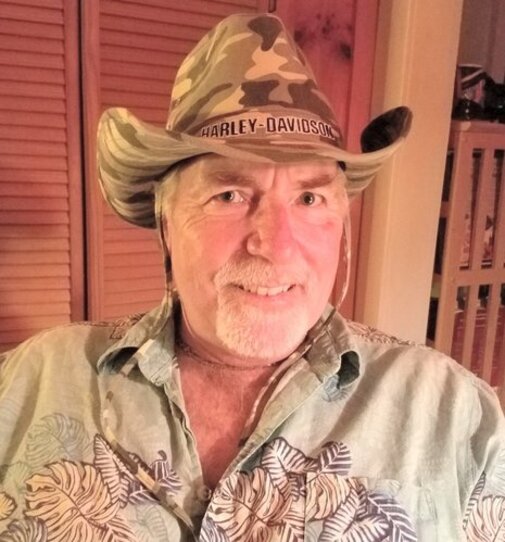 Amesbury – Once a pirate, always a pirate. Timothy J. Lord entered eternal life on Thursday, July 21, 2022. This was an unexpected break in the life’s work of a man of many passions, and an unfinished book of true stories that may leave some scratching their heads and wondering if he was spinning a yarn.
Tim started out as a Halloween baby with a mischievous soul 70 years ago. His father taught him to build and sail wooden boats, while his uncle Aesa taught him to dive at fishing weirs and a fondness for several sardine cans from a young age, all just outside of Eastport, Maine. His roots as a true Mainer were kept alive in his impressive “Pine Tree State” impersonations, his (often colorful) library of jokes, and his love of the sea.
After forays into Calais and Brownfield (ME), mostly antique and lumber shops, the Lord family ended up in Groveland, MA where his “long haired” curly red hair and flared pants eventually led him to a hippie hell of a existence. Yes, among other things, the dude landed in Woodstock two weeks EARLY to build stages and landed a high-profile NY Times photo of him smoking a big grease pipe in front of the stage.
Choose it a few years later, and Tim ended up with a 15+ year career at Harbor Schools in Newburyport as Residential Program Director, providing therapeutic support to children with learning disabilities and working with some of his closest lifelong friends because.
Sometime between his tenure in community service and beginning his life as an FT boat captain, he was given the gift of two children who he will cherish at Neverland. Now, both in their thirties, Sarah will always be his “little girl” and Ben will always be his “boy”. The Lord Kids grew up on two boats, the first principal home being the Edna Hoyt, a big black wooden pirate ship, where babysitting involved fast rides in bosun’s chairs, where they perfected their way through the rigging while above deck where Dad found them could keep an eye on, kept out of trouble.
The second was The Adventure, a 121 foot historic sailing schooner from Gloucester, MA. The adventure represented nearly a decade of life-changing commitments that allowed Tim to follow the course of his ancestors while keeping schooner sailing traditions alive and providing Sarah and Ben with an incredible upbringing. From there, Captain Tim piloted many schooners, high speed cats, yachts, tugs, ducks, etc. Throughout all of the adventures, Tim instilled love, trust, listening, giving, honesty and compromise in the children while encouraging adventure and sharing in a little bit of the Lord -Adrenaline junkie thing. For connoisseurs, the beat goes on.
Between boating and parenthood, Tim transitioned as a real estate investor and broker, remodeling, exchanging and owning condos. He also had a fondness for exotic cars and bikes, feeding that Lord Adrenaline Junkie thing, jumping between Austen Healys, Iso Rivaltas, BMR bikes and finally and unconditionally ending up with a Harley Road King he shared with Charles Bronson Flames equipped, plenty of chrome and leather lined throttle grips. Around the time the Harley came on deck the kids seemed in need of some country living so he bought a cottage on his beloved Lake Attitash in Amesbury. Life by the lake suited them and really added to the dimension of the Lord family. The “pond” was a bit smaller, but the neighborhood was and is full of nature and like-minded sea lovers who weren’t afraid to let their hair down and take care of each other.
For those who had the pleasure, Tim was a lovable and loyal friend who would tell you the truth and have your back. He was a big guy with a gentle soul and a huge heart. He was known for turning one of his more docile kitties into a guitar, placing a bet on how far he could throw a Christmas tree, shaking a late-night hiney at everything from the Stones to Prince to Santana, Destroying vitamin T (Taquila and/or Tito’s), cracking the Harley 100+ between RT 110 rides, enjoying a few cigars with your favorite people on the beach and arranging weddings for your best and dearest people.
Tim is survived by Cari Lord, his wife, best friend, fellow laugher, and accomplice for more than 16 years; daughter Sarah Lord and grandson Camden Walton; son Ben Lord, his wife Emily and grandson Jackson; brother, Mickey (Dan) Lord and his wife Johanna; Moe, the children’s wonderful mother; some nieces and nephews and so many incredible friends, neighborhood sweethearts and others with “salt in their mittens”. This pirate looked 70 and didn’t want to cast off yet. I wish him “good winds and clear seas”… and as Tim would say to his now dating best friend Dave “See you!”
There will be a gathering for family, close friends and neighbors on Lake Atti Beach Sunday, July 31, 4:00 p.m. to sunset. Since parking is limited, we recommend carpooling.