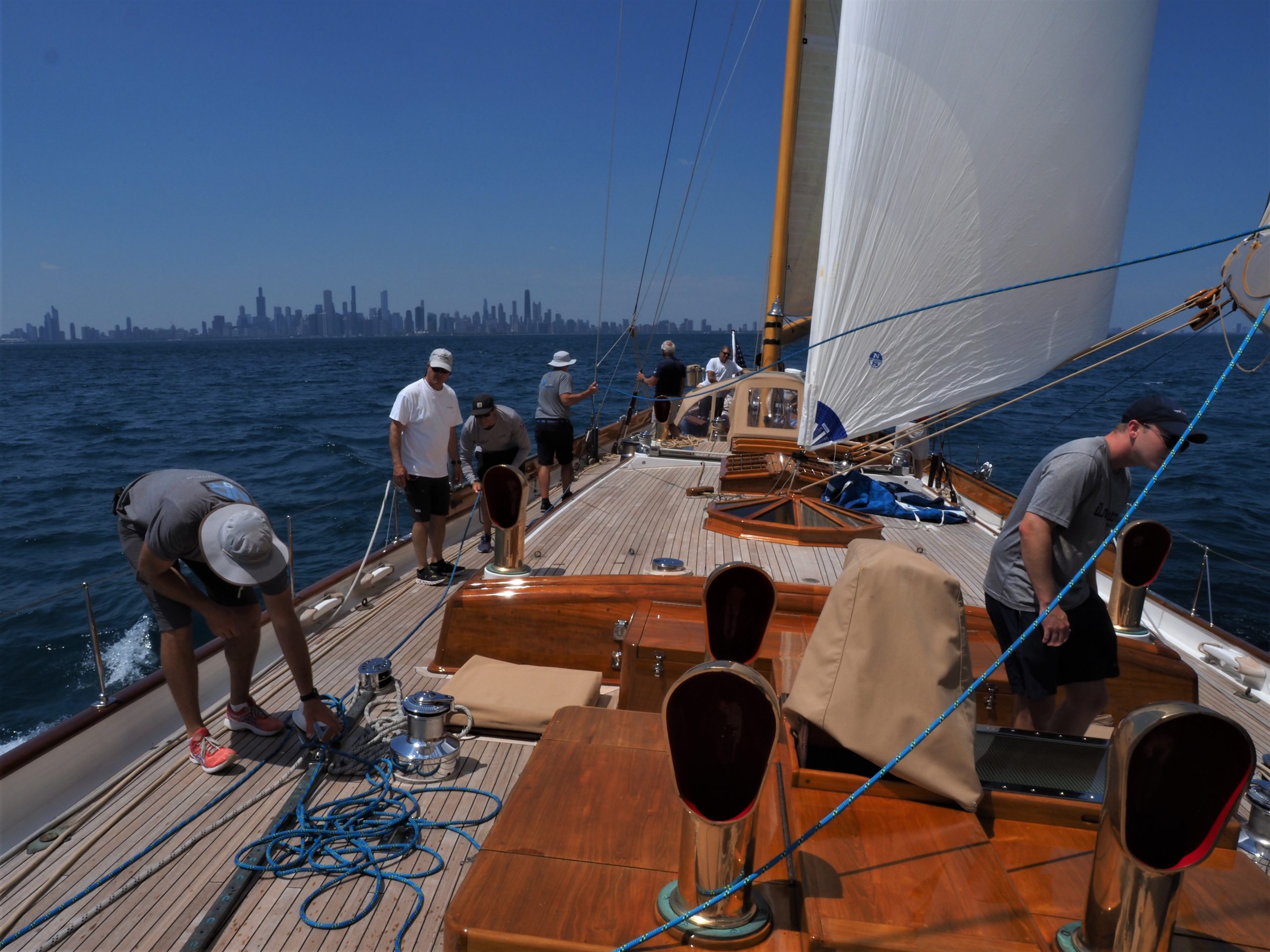 Entering Port of Mackinac Island Sunday 24th Julyth at 5:04 a.m. driver Greg Fordon parked Whitehawk and a crew of 14 went below deck to toast their first target of 31 boats in the cruising division in the 113th Chicago Mac Race. They were ninth on corrected time with 2:05:41:04.

Owner Peter Thornton emailed and made a few calls and assembled an experienced team to be with him on a few Macs. Antonio Cuervas Mons flew in from Spain, Willie Lynch, Peter Eagan and Lat Spinney are from Rhode Island, Deane Tank is from West South Carolina, Bogdan Ogorek, Fordon and Gary Murino are from Chicago, Tom Murray, a suburb of Chicago, Tom Cote , Harbor Springs , Mich., Chris Thornton and his son Jack live in Ponte Vedra Beach, Florida.

The 104-foot ketch left the start line at 3:00 p.m. Friday, July 22 in front of Navy Pier, setting a fast pace that propelled her a few minutes before several severe storms.

“That’s the trick to this thing, staying ahead of the storm. When we got to Milwaukee on Friday night, it was brutal. Lightning strikes lit up the sky from 11:00 p.m. to midnight. It rained heavily, there was hail and 30-knot winds. We saw the next one coming from Minnesota. We forestalled that with the skin of our teeth. Roxy followed us all the way up. We were 1.5 knots faster than them; They were about 10-15 miles behind us and got hit. We saw 20 knots plus wind.”

On Friday around 21:30 the A1 spinnaker caught on the bowsprit and broke off in the middle. “Our crew did a spectacular job,” said Thornton. “We had to improvise all the time.”

Sailing east of the compass line Saturday afternoon at 10 knots and riding 20-mile winds, Whitehawk made the right call to stay a few miles off the Michigan coast near South Manitou Island. When the storm hit from 9:30 p.m. to midnight they were making 15 knots.

“We were just over the top of the storm,” Thornton said. “The other boats were glued. We saw the thermals build and get darker and darker. We had to get closer to the shore.”

“When I looked at the radar, there was a red bar,” said Chris, who drove half the way. “The lake was a mess. It was 12-13 from the Southwest and minutes later 25-30. The north end of the storm hit us near Beaver Island. The breeze picked up so quickly around Petoskey. We were able to get the kite down. We rebuilt it off Grays Reef. Down The Straits it sailed angles and jibes in moderate winds. We came under the bridge and the sun was rising on the northern horizon. The sun had come up at the dock and nobody was there.”

Whitehawk offers the best of everything. While the cruising division is competitive, it’s a quiet voyage compared to Thornton’s Il Mostro, a Volvo Ocean 70.

“The boat is really stable and quiet, it’s really reassuring and inspires confidence,” said Chris. “When you’re down, you don’t feel like you’re on a boat. We sail hard, but it’s a different approach. We had great meals in the evenings with some wine and then ice cream. It’s a civilized, comfortable sail.”

“It’s always great to be on the boat with my father and grandfather,” he said. “This was one of the warmer Macs I’ve been on. It’s nice to be out in the fresh air. When you’re not on watch the boat is big enough to be on deck and recline on one of the sail bags. There was a beautiful orange sky on Saturday night. After the rain there was a rainbow on the starboard side. Everyone took photos, then the wind picked up again. Our crew never hit their heads on anything.”

Peter Thornton’s first Mac was in 1974 when Gene McCarthy and two others charted a C&C 39. He called McCarthy at Christmas to extend an invitation, and he quickly accepted.

Under an awning cover on a semicircular couch, the two watched the action and exchanged a few words on navigation and stories of Mac adventures spanning six decades. McCarthy turned 94 on July 25, adding to his record of making it his 67th birthdayth Mac.

“I had the perfect place to race,” said McCarthy, who lives in St. Petersburg, Fla. “We made a few suggestions but it was an excellent crew with a lot of experience. I kept up to date with everything on the boat.

“It was a great Christmas present. If Peter hadn’t called I probably wouldn’t have gone.”

In a heartfelt moment, McCarthy addressed the crew on Sunday morning, who celebrated with beers.

“I thank the crew for their hard work and success,” he said. “This was by far the most rewarding Mac sailing I have ever done. I have never sailed so luxuriously. When I went to sleep [in the cabin] it was the most comfortable sleep I have ever experienced.” Her thunderous applause was returned.

McCarthy stayed on Mackinac Island for the Island Goat Society Party on the afternoon of July 26th. – Photo thanks to Yousef Asseo, story by Seth Schwartz.