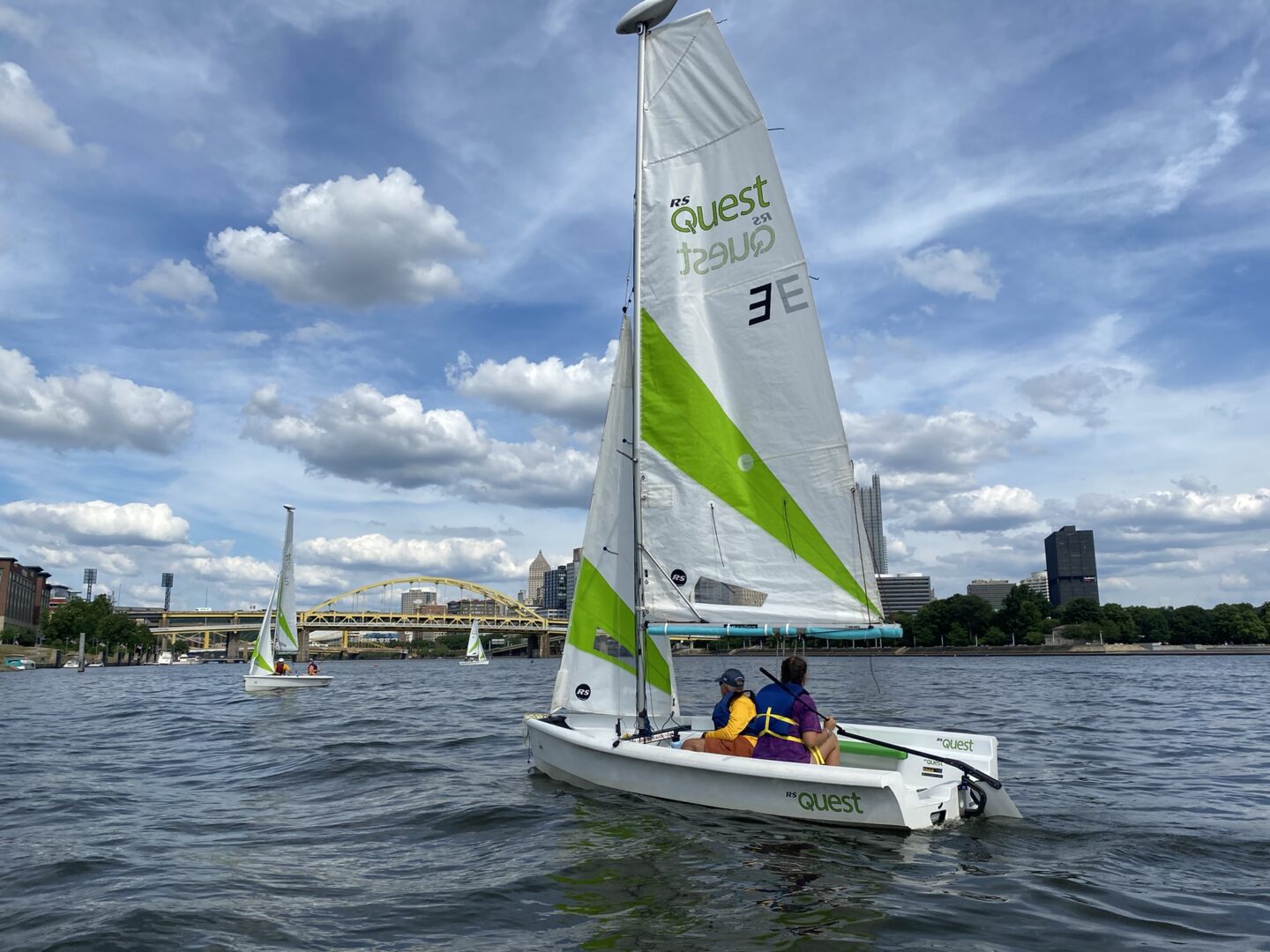 “Sailing is just a really enjoyable thing. It requires your attention, but it doesn’t require physical strength,” said founder Joe Kirk. “You don’t have to be the biggest, strongest, fastest to be the best at sailing.”

Three long white sailboats slice through the wind on the Allegheny River on a sunny afternoon. Four teens and three adult instructors on board pull ropes and look out for obstacles on the water. White and green pylons flutter against the downtown Pittsburgh skyline as ships pick up speed and cruise around buoys.

this is that Point of the Pittsburgh Sailing League, a program for local students to try their hand at sailing. One such student is Eva August, an aspiring junior at CAPA 6-12 in Pittsburgh who is majoring in visual arts.

“I had heard of sailing as an activity, but I didn’t really know it happened on the river,” August said. “I had never seen that before.”

This is actually August’s second year on the program and it’s going really well. She said during her time with the league she has enjoyed the autonomy that sailing has brought her.

“You’re really learning how to make something and you actually go out and do it yourself, with no guidance,” August said. “It’s almost like a little form of independence.”

The program was started in 2021 by Joe Kirk. Last year’s program was curtailed by COVID, but this year it’s in full swing. Kirk, who has been a sailor himself since the 1970’s, created the program to introduce local high school students to the sport. While he said he often sails on Lake Arthur in Butler County, he and the other instructors wanted a more accessible program for city teens.

This year students are predominantly from Taylor Allderdice, Pittsburgh Obama and CAPA, but all teenagers 14 and older are eligible to apply. He said it’s nice to have CAPA students like Eva August because they can take the light rail or walk across a bridge to get to the docking site near the Carnegie Science Center. The program has a $200 application fee, but Kirk said no student will be turned away if they can’t afford it.

With an education grant from State Senator Wayne Fontana and an agreement with the Sports and Moorings Board of Directors, the nonprofit has been able to purchase and maintain several boats. 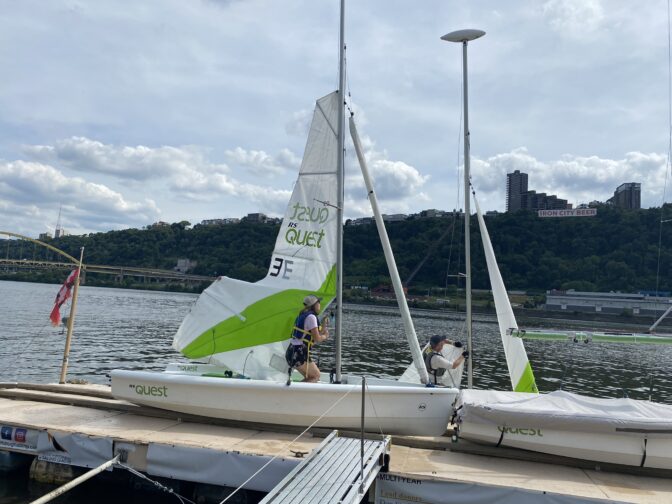 Pittsburgh CAPA 6-12 aspiring junior Eva August prepares the sailboats to hit the water during a sailing session Thursday that begins near the Carnegie Science Center.

Tack, gybe and learn the ropes

In Pittsburgh, Kirk said, the sailing season typically runs from late May to early October, so the high school program begins in the classroom in April. There, trained sailing instructors teach the students the physics of the sport.

“We have them build little paper sailboats and they go around with the sailboats and we talk about how the wind works on that sail,” Kirk said. “In this way we teach the traffic rules who has the right of way when sailing boats meet.”

If the sailboats were on a lake, Kirk said, they would give way to canoes and kayaks, while motorboats would give way to sailboats. But because the city’s rivers have a so-called regulated navigation area, where merchant ships are limited by water depth, sailboats have given way to vessels like barges and the Gateway Clipper fleet. Kirk has a radio on board to communicate with any boat passing by. 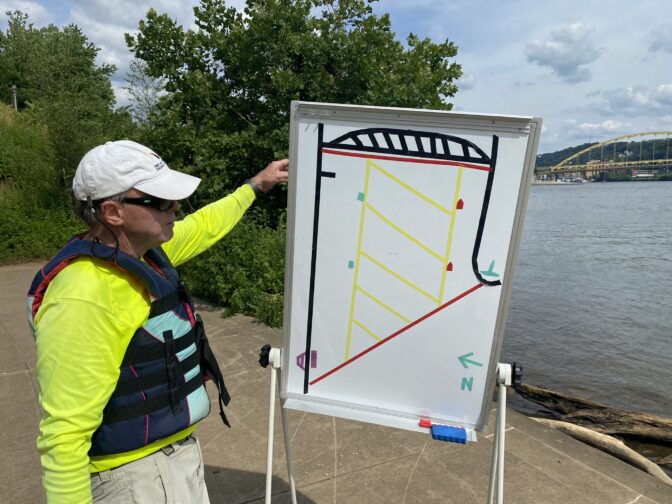 Joe Kirk, founder of the Point of Pittsburgh Sailing League, charts the day’s sailing routes on a white board before the students and instructors hit the water.

Before each sailing session, Kirk pulls out a white board propped up on an easel and draws a mockup of the route and any obstacles. He goes over the maneuvers of the day and where they will sail. That day the students stayed near the North Shore on the Allegheny River in front of the statue of Mister Rogers.

“It’ll only be a few hundred yards long, but that’s more than long enough for what they’re going to need today,” Kirk said.

The students practiced two specific skills: jibing and tacking. Jibing, he said, is when the stern or back of the boat crosses the wind; Tacking is when the bow or front crosses the wind. Both are necessary skills for sailing, Kirk said, especially when larger boats come by. 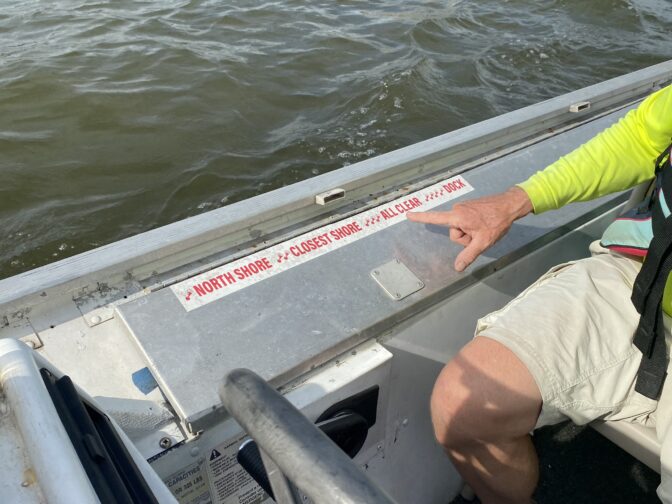 Point of Pittsburgh Sailing League founder Joe Kirk points to a safety notice detailing what the air horn count means for sailors. The training sailboats also have the instructions, he said, in case a large powerboat or gateway clipper needs to get through.

When a Gateway Clipper boat floats up the Monongahela River, Kirk prepares to coordinate a safe location for his students’ boats. He fishes an air horn from the motorboat he drives alongside the sailboats and depresses it twice, pauses and honks twice again. A vertical red and white sign on the side of the motorboat has small horn pictures that indicate what the number of horns means. One honk for North Shore, two for nearest shore, three for OK, and four for Dock.

With his other hand, he pulls out a small radio and contacts the clipper.

“Sailing safely to Gateway Clipper, we exit navigation area, over.”

Even if there are choppy waves or high winds, Kirk says the students are prepared. Also, the boats they use are made for learning, with a mast top float that keeps the boat from tipping over.

“The students practice capsizing exercises. You must be able to bring the boat back up in a minute. And these boats are designed to do that.”

These sailboats even have bright green pool noodles on the outriggers above the students’ heads that would soften a blow if it happened to swing and hit them.

“Frankly, concussion is one of the most common injuries in high school and collegiate sailing,” he said.

Given Pittsburgh’s hilly topography, Kirk says it can be difficult to keep up with weather reports, wind speed forecasts and water levels.

“Sailing, you know, in an urban area like Pittsburgh, especially on a navigable waterway, is really something that should be done in an organized way,” Kirk said. “We’re not suggesting that people just come here and throw a sailboat in the river and go sailing around.” 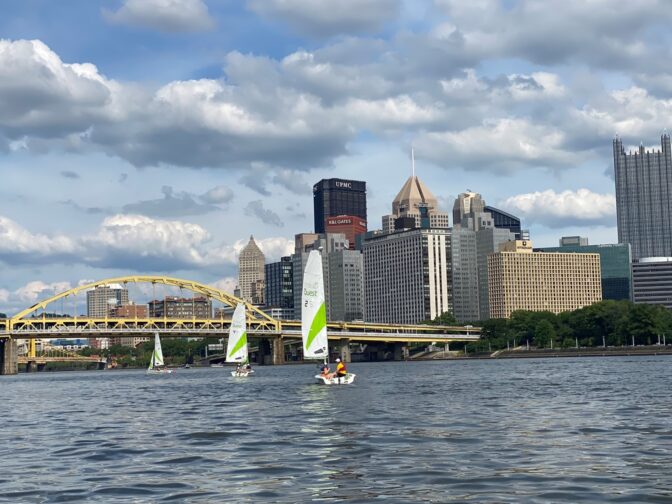 Teenagers maneuver sailboats on the Allegheny River as part of the Point of Pittsburgh Sailing League program for students.

But not many people do, he says, because sailing those rivers isn’t as common as it is on a larger lake or ocean. Kirk hopes some of the sailors he helps train will continue to sail or even compete.

All students are given caps when they are in the program and once the new sailors are comfortable they are assessed on their ability.

If successful, students will receive a small sailboat pin on their cap. Shortly after visiting the league, Kirk said Eva August had just earned her first pin.