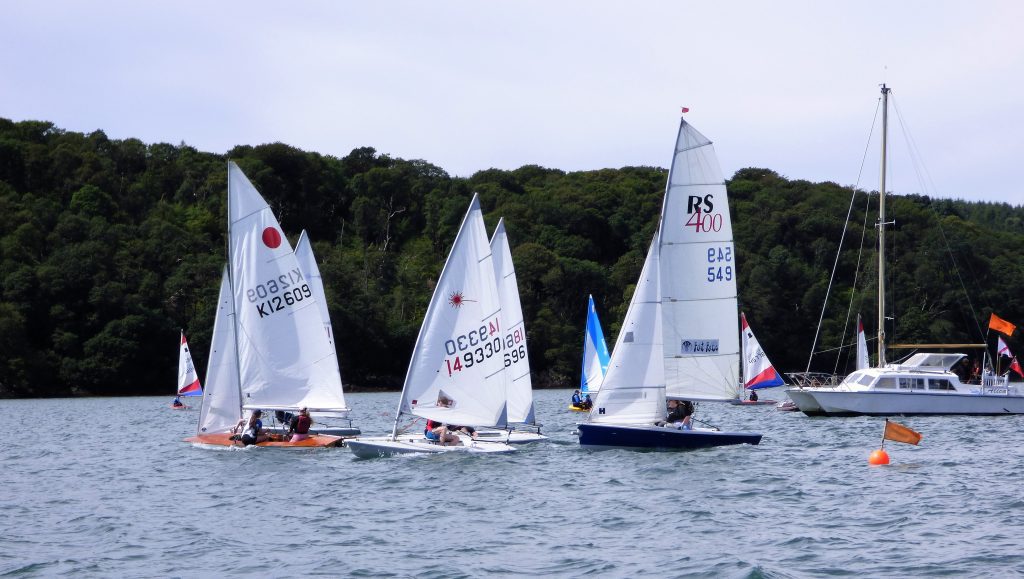 Happy for the third time! After two years without a 2020 cadet week and a 2021 cadet week severely restricted by Covid, things were finally almost back to normal for 2022. Fifty cadets plus a similar number of volunteers, instructors, security crews, race officers, kitchen staff and pier hands were rewarded with a great week, all but one day in warm sunshine and mostly favorable winds.

Day 1 Monday started early! Tide times required cadets to be at the pier ready to sail by 07.15. The forecast had been poor, but the early arrivals were greeted with a light wind and clearing skies. Further out, the “Kepis Noir” Black Cap racers were soon maneuvering to get the perfect start to Race 1, which was led by Chief Race Officer, Stewart Biggar’s team of experts ashore in the start hut. On land, the coached racers, the ‘kepis bleu’, pondered race boats, with plans for timing practice starts, brand rounds in close company and learning tactics. The promoted group “Kepis Blancs” quickly picked up where they left off in the rookie group of the previous year. Divided into two age groups, the novice Kepis Rouge were excused from the early start and left the pier free before beginning their basic training.

The race was split into fast and slow handicap fleets. Despite little or no wind at the start/finish line, James Bishop took the first fast handicap win in his Laser while Oliver Bennet won both slow handicap races in his Laser Pico. Race two for the fast fleet rewarded Sam Bennet with his first Laser Radial win when he defeated Bishop.

After tea in the clubhouse, dozens of sparkling clean cadets couldn’t wait to cover themselves in Solway mud in Mudlark’s 2022! Sliding down the high mud bank into the incoming saltwater and covering yourself in the stuff isn’t everyone’s idea of ​​fun, but thanks to the brave adult safety supervisors, not least SYC Cadet Officer Joanne Harris, and after the tug of war and capture-the-flag -Games ended, more muddy fun was guaranteed. Parents and friends later had to try to identify their younger ones when they were finally persuaded to end the fun by coming up the mud-covered slipway, ready to be hosed down with cold water before cleaning themselves up under a warm shower.

Day 2 More warm sunshine, light winds and racing and training have resumed. When the bay race officials switched to a committee boat and made the most of the wind, it was race victories for James Bishop and Oliver Hardman in the fast fleet, while Toby Inglehart won twice in the slow handicap races. After failing to start Day 1 in the powerful Fireball dinghy, Ellie Rowand and crew Lilli Bell were rewarded with third place in race one. Visitors to the Royal Yachting Association Scotland were able to observe cadet sailing at all levels at its best. A barbecue evening with parents and friends in the clubhouse, followed by a treasure hunt, ended the day in a beautiful evening.

Day 3 and at 10.00am it was calm with bright sunshine but at 10.30am there was a nice sea breeze. Also arriving was a crew from ITV Border Television as well as a returning RYA Scotland officers. Much interest and excitement was generated by some of the trainees who were interviewed on camera before reporter Natasha and cameraman Mike boarded a high speed RIB for a tour of the on water activities featured in a grandstand view of the second race start culminated. The evening’s Look Around report showed cadet sailing and Kippford at its best, blessed with near perfect weather, the stars of the show were Katie Bishop and Nicola McColm in their RS400 and Ellie Rowand and her crew Lilli Bell on the Fireball trapeze. The coached racers now had their own committee boat starts and gained their first experience of racing action. Games and quizzes rounded off the day.

Thursday and not so good weather, wet and windless. After a delay, conditions improved enough for activities to resume. The evening ‘no parents’ cadet dinner served to cadets by Club Commodore and Committee followed by the ceilidh led by Caller and DJ Ross Kennedy ‘on fire’ guaranteed a great night.

It seemed to have barely started, but already Friday! The last few races have been sailed in the best winds of the week, including several capsizes, but all recovered, although Lilli Bell, who is now an expert on her trapeze, managed to lose her harness in the process. Later in the day the trophies and awards were presented, certificates of training presented and then the Cadet Captains’ Novelty Awards, some mocked with much laughter, bringing the process to an end for another year.

Special thanks to Emma McRobert, Solway Yacht Club Training Officer and Joanne Harris, Club Cadet Officer, who both did a great job organizing the whole week along with their amazing team of volunteers and instructors. Thanks also to Stewart Biggar and his Race Management Team for successfully completing the race program.