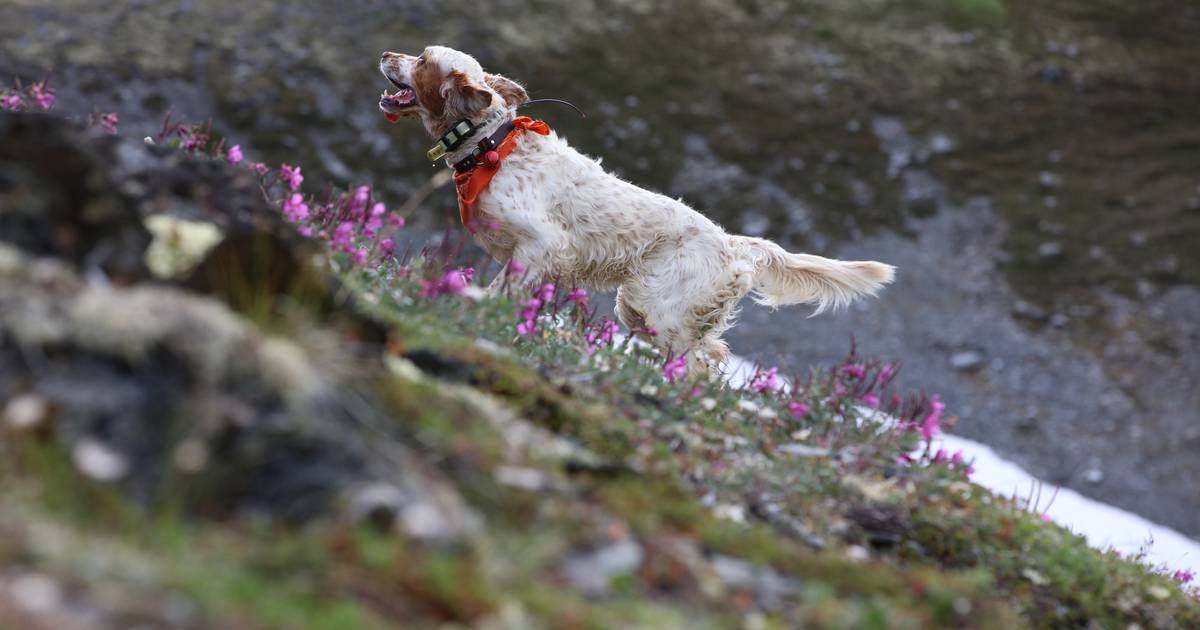 “Must feel good to be stupid again,” Christine said from her perch in a secluded hollow on the steep cliff 10 feet up the rain-soaked mountain behind me.

The singsong in her voice brought a smile to my face, knowing she was reveling in my stupidity too. For the second time in a few days we found ourselves in places that didn’t really allow for a break because gravity insisted on trying to pull us across.

On a previous trip we rode up a slate slide and Christine commented that it was steep. I told her it wasn’t that bad as I had removed a fairly large chunk of granite. The jagged rock accelerated fairly quickly and disappeared over the edge of a rocky gorge 300 meters below him.

“It made me a little nauseous,” Christine said. “Did you notice that Rigby didn’t try to get it?”

“Yes,” I replied. “He doesn’t want to go all the way down, which will take a while and he might miss a treat.”

“Well,” she said, “it seems there must be a way down the valley that isn’t so steep.”

A few minutes later I turned to check on her progress as we climbed the slide. She was frozen in place, clinging to a small boulder while Rigby danced around her as if he thought it was a new game.

Christine yelled over the wind, which was blowing at a steady 40mph and would bid 50 or 60, “Please call Rigby away from me before he pushes me off the mountain.”

Later, after I told friends about my behavior, one of them said, “You should have slapped his throat.”

Apparently, the friend had no appreciation for the fast approaching start of the highland hunting season on August 10, or the importance of exploring new areas when familiar places did not hold promise.

We had spent most of the summer visiting our usual hunting grounds which didn’t show much for bird numbers. In the last three to four seasons the setters had found fewer birds and we hadn’t taken more than one hand could count in that time.

It happens. While a mountain valley may look the same year after year, it’s not easy to know for sure why things have changed unless you can be there to observe everything that’s happening. There were some severe winters and late springs that no doubt contributed to the decline. Predator numbers also appear to have decreased, further evidence that the region’s wild birds may be in distress.

The abundance of songbirds is a barometer of the health of an ecosystem, and their numbers appear to have declined significantly in recent years.

The lack of insects for raising birds does not appear to be a problem, although a reduction in the bee population is evident. Rigby’s swollen eyebrows testify to a healthy population of biting bugs after a climb up into the highlands.

In any case, we had looked at a couple of promising places, but recent circumstances had prevented the kind of exploration that involves roaming off the road and into the Alps.

I’ve done it a lot over the years, and since Christine and I got together, she’s done quite a bit. The first time she did it, she commented that only someone who was desperate or stupid would do something like that. And yet, every time I mention it, she goes all out. And she still believes some of what I predict when we leave, and sometimes doesn’t.

As we went further up the slate chute, I had a full-time job keeping Hugo and Rigby from terrorizing Christine. Normally, Hugo doesn’t want anything to do with the two of us being around while we explore the mountains. He’s way too busy hunting and will only take a break if we get him to sit and rest for a moment.

For some reason, perhaps because Rigby had told him how much fun it was, Hugo would run to her and try to climb onto her lap whenever Christine got stuck in a particularly treacherous spot. Rigby would not tolerate that. Pretending to own his people, he uses his enormous body to assert his right to be closest to his people, no matter how badly off they are.

As I laughed at her antics, I thought that Christine could really hit me. It did not, and our journey did not show what we had hoped for, which was ample evidence of white-tailed ptarmigan.

A few days later I reminded Christine that we had time to review another spot, another bushwhacking job. That’s why she’s my soulmate: no matter what, she’s always up for anything, even though she knows it hardly qualifies as Type B fun.

“Looks steep,” Christine said when we stopped at the spot.

“Maybe a little,” I replied with a wink, “but at least the brush won’t be above our waists.”

Forty-five minutes later, on our hands and knees, pulling ourselves up at the base of the man-tall grass and fireweed, Christine said, “Surely glad the scrub isn’t over our waists.”

We could hear Rigby coming down somewhere above us. “You better hold on, we won’t see him until he gets to us,” I said for a moment before he burst through the brush and knocked me over.

An hour and a half later we set off into the sub-alpine realm, soaked to the skin under our rain gear. “Those moments are what are worth it,” Christine said.

Most people we know who head to the highlands share the same feeling we have when we finally get there. It’s like a supercharged rush of adrenaline coursing through your body, instantly relieving you of the stress and fatigue of the climb.

As we climbed another 1,500 feet to reach about 3,500 feet, we thought the view was fabulous. The ridge we stood on separated two valleys of classic ptarmigan country. We found some signs of Dall sheep, mountain goats and caribou. Not much bird sign but enough to bring us back later when the chicks are fully grown.

We decided to put on our rain gear and sliding down the steep slope we had come up would work great for the descent.

We were at the bottom when Christine commented on my intellect and then asked, “Did your bum rip out of your rain pants? Mine are shredded.”

“Yep,” I replied, around the time the giant brawler Rigby burst through the undergrowth and knocked Christine over where she was sitting.

As the saying goes, “If you wanna be dumb, you better be tough.” The saying misses the point of the wonder and excitement that comes from thinking outside the box and enjoying the country, no matter what the smart people think.