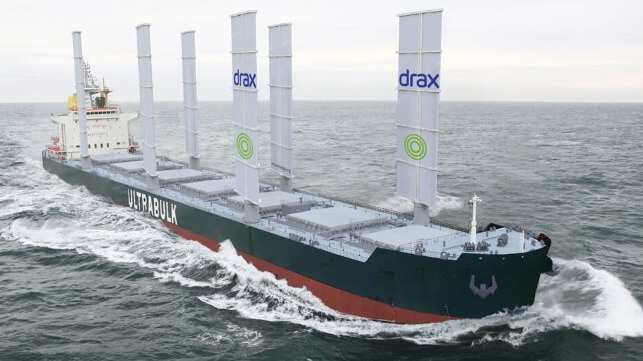 With the support of the Scottish Government and industry leaders including Lloyd’s Register, a new effort is being made to research and develop wing sail technology that can be retrofitted to operating merchant vessels. The three-year project aims to have a demonstration on a commercial vessel by 2023, while removing the barriers to the technology’s deployment.

Founded in 2014, Smart Green Shipping has worked to develop its automated sailing technology along with supporting digital routing software that analyzes the wind to harness the power to give the ship fuel and emissions savings. According to the company, a feasibility study was conducted in 2018 to overcome obstacles in adopting the technology. In collaboration with the European Space Agency incubator in 2019, they also developed digital tools to predict and optimize wind utilization in shipping.

SGS did not provide design details, but illustrations show that similar to other concepts being developed, the sails will fold down to reduce obstructions and disruption during loading and unloading. The raised sails would also pivot to maximize contribution to propulsion.

Several similar projects exploring the use of rigid sails to assist in propulsion are underway throughout the marine industry. To date, rotors have been the primary technology employed for wind-assisted propulsion, while several prototype sails are also under development. Japan’s Mitsui OSK Lines recently partnered with the Oshima Shipyard completed installation a telescopic rigid sail on a bulker under construction. They plan to start testing and be operational by October this year.

“Shipping has a long history of harnessing the power of the wind, but digital technologies allow us to work toward making zero-emission ships a reality,” said Diane Gilpin, founder of SGS. “Smart Green Shipping’s FastRig wing sail technology offers a financially and technically robust solution to support shipping’s green transition.”

The project begins with initial testing of FastRig wing sails at a land-based site at Peel Port’s Hunterston Port and Resource Center in conjunction with Clyde-based specialist engineering partner Malin. They will also continue to develop the TradeWind weather routing software, which creates route plans for wind optimization. The project will also address barriers to wider industry adoption of the technology with a variety of technical, digital and financial solutions. After successful land-based tests, a demonstration on board a ship is to be carried out by 2023.

Lloyd’s Register will participate in the project, building on its initial review of FastRig technology and its ability to augment a ship’s powertrain. “We successfully completed the first
Technology approval phase,” said Tom Wolodarsky, Technical Authority for Wind Propulsion Systems, Lloyd’s Register, noting “which can help provide certainty
industry and demonstrate that WAPS technology is a safe, viable option that is well received
established, independent standards.”

Modeling tests conducted by SGS in collaboration with the University of Southampton’s Wolfson Unit show the technology could deliver at least 20 per cent fuel savings and GHG reductions for retrofits, with up to 50 per cent fuel savings possible for new small and medium ships to build. According to the company, its analysis shows that FastRig technology could likely be deployed on up to 40,000 vessels in the global merchant fleet, mostly bulkers and tankers.

The R&D project is supported with a total funding grant of approximately US$6 million, including US$3.8 million from industry partners. Scottish Enterprise, Scotland’s national business agency, is also providing a US$2.2 million grant.