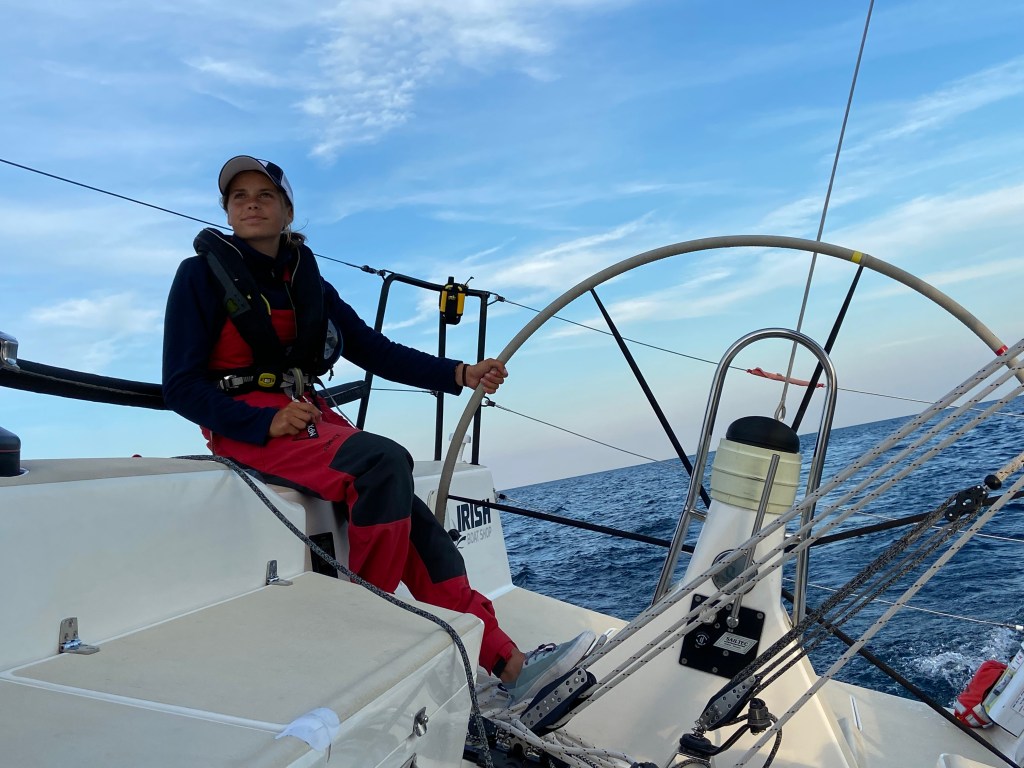 Both races are held in high esteem as conditions can be extreme – this year was no exception and a humbling reminder that sailboat racing outcomes depend on the weather as much as any other variable.

On the Saturday night of the last Mac race, a huge mass of thunderstorms with incessant rain and lightning plagued the fleet for hours with winds in excess of 40 knots. Mill Valley’s John Collins and Dave Gruver, along with Neil Gibbens (San Rafael) and crew, rode their first Mac on Mojo, a chartered Beneteau 40.7.

Collins said they knew the weather system was coming and were prepared for it.

“Luckily it rolled in before dark, you could see it coming and we watched the boats in front of us overturn or disappear into the storm line,” Collins recalled. “It was kite down, reef the mainsail, but then wait, you know what, take the mains down! We had the mainsail down and the number three jib up and sailed in that configuration for a couple of hours. We just hoped we wouldn’t break anything. To say the rain was biblical in proportion is an understatement. I’ve never seen so much rain.”

Despite this, Mojo finished first in the division.

“The breaks went our way and we had a really talented navigator who put us in the right place,” said Collins, who is excited about racing the Mac again, though he said, “Preferably on something , that flies!”

Veteran Mac sailors Matt and Kim Krogstad, members of the San Francisco Yacht Club, and their crew won the division on Dark Star, a Hobie 33 -111 No surprise.

“During the storm on the first night we did a really great job changing sails for the changing circumstances, giving us a 10-12 mile head start on the next boat, Warlock, by morning, which was significant and exciting.” said. “Unfortunately, after the storm the wind died down completely, Warlock caught wind and caught us. It was a battle between us for the rest of the race.”

Scott Sellers agreed: “Seven hours of thunderstorms kept us on our toes and we were always ready to drop the spinnaker if the wind exceeded 30 knots. With five of our eight crew members under the age of 25, the youthful energy and three archers paid off.”

Of around 249 boats that competed in this year’s Mac – the 113th edition of the event – 29 retired while just one was struck by lightning.

The Sellers’ family (Scott, mother Jill, Hannah, Merritt, 14, and Hailey, 12) have always spent their summers in Harbor Springs, MI, where they sail most days. Scott grew up sailing on Lake Michigan and knows the ins and outs of it well having competed in about 35 Mackinac races including the Bayview to Mac. Sellers loves to sail with his daughters and has taken care of them since they were little to sail the Mac races.

Notably, the weekend before the Chicago to Mac race, Merritt and her father drove the Bayview Mac along with 172 registered competitors and won the division. It was Merritt’s first Mac race and one she had long been preparing for.

“I’ve always known that the Mac races are the pinnacle,” Merritt said. “I’ve competed in events like the Opti Team Trials and Nationals and the C-420 Nationals, but the Mac races mean more to me and this race did
especially meaningful to me because I got to do it with my dad. It’s something I’ve always known I wanted to do and it’s my favorite way of sailing.”

Sellers made sure his daughter had safety skills in preparation for the race.

“As a requirement, she had to do CrossFit twice a week to build muscle, and we practiced a lot with safety stuff like man overboard drills,” noted Scott. “I had her sail in 20 knots with the spinnaker up – just the two of us, and I told her, ‘I’ve just gone overboard and you have to bring the spinnaker down yourself, then come and get the cushion (aka sailor’s dummy). ). She could do it all by herself on a J-111 in 20 knots of wind.”

Merritt knew they were leading as she drove at her station at night and her father napped downstairs. While their hopes of going into the race were only to go to the finish, their competitive spirit took over once they were ahead.

“I didn’t want to lose our lead so badly because up until then we had spent the race in second place, so I wanted to get up front – during the night I did everything I could to make the boat faster!” she said smiling.

Apparently she did just that, for by the time Scott came on deck that morning, Nosurprise had gained another mile over her closest competitor.

“I told Merritt to take naps more often,” Sellers laughed. “She’s only 14 but she’s really excited. She can steer the bow, change sails, drive – alone. While we didn’t want to win as it was all about the experience of racing together, when we raced – and I’m a very competitive person – I saw how aggressive she wanted to be and she was there to win it. I’m proud of her.”