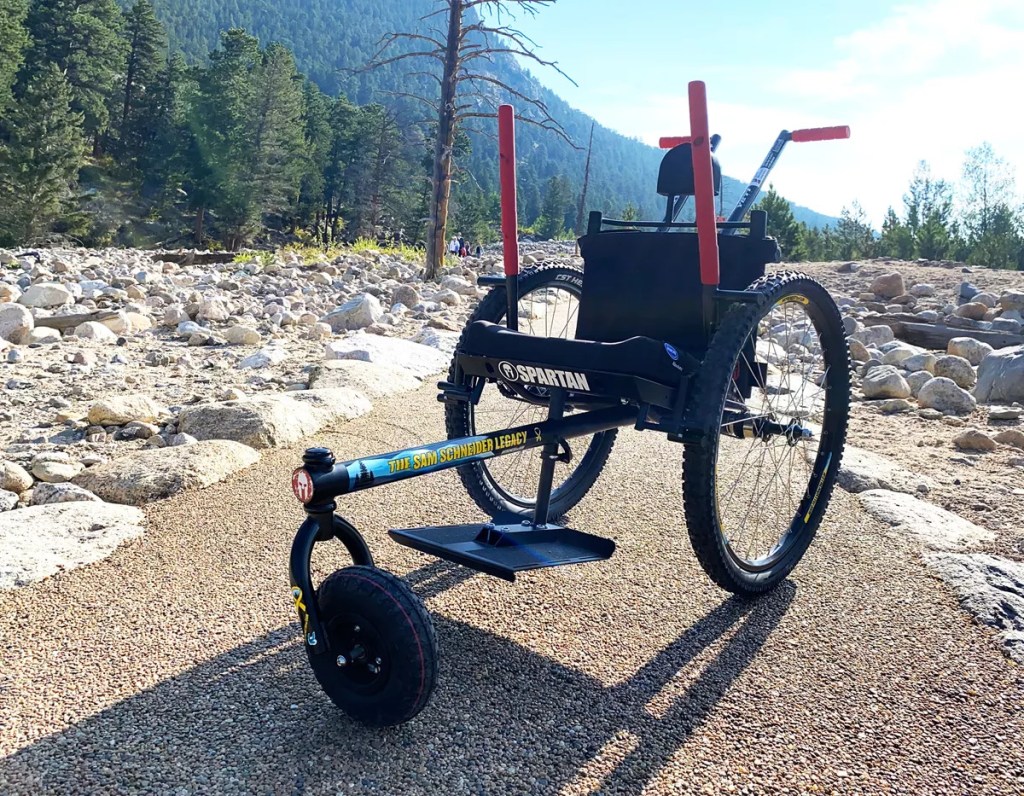 Rocky Mountain National Park announced on July 27 that the Sam Schneider Legacy Foundation has donated an all-terrain wheelchair to the Rocky Mountain Conservancy for rental to guests through the Estes Park Mountain Shop.

Park visitors can now reserve the versatile wheelchair for free while exploring RMNP.

In addition to all-terrain wheels and lever handles, the chair has push handles on the back so hikers can lend a hand if needed.

Schneider’s family first approached former Conservancy and Park staffer Quinn Brett to donate the chair to her. In October 2017, while climbing El Capitan in Yosemite, Brett fell over 100 feet and suffered a T-12 ASIA A spinal cord injury, leaving her paralyzed from the waist down.

Brett and Schneider fought similar battles and shared a similar passion for life and exploring what it had to offer.

“I grew up with a cabin and explored forests and water. I was very quickly drawn to the freedom and ability to create adventures as opposed to organized sports,” said Brett. “I am an energetic bumblebee and have a natural need for exercise. I think it’s inherent in my urge to run, swim, bike, climb and just tackle as much terrain as efficiently as possible.”

Brett told Schneider’s family that they would like to see the chair experienced and appreciated by as many people as possible and came up with the idea of ​​donating it to the Conservancy for park guests to rent out.

“Accessibility is a big priority in a lot of the trail work we do. The Alluvial Fan is a truly accessible trail, but there are a lot of trails in the park and user groups that want more backcountry adventures than a traditionally accessible trail,” said Estee Rivera, Executive Director of Rocky Mountain Conservancy. “That’s when we started talking to Zach at Estes Park Mountain Shop about potentially adding this chair to their fleet of rental gear.”

The recently donated chair is housed and rented out by the Estes Park Mountain Shop at 2050 Big Thompson Avenue, and additional chairs were also made available thanks to the generosity of Estes Park resident and KEP Expedition leader Brian Keapplinger.

“He’s approached us to add to his inventory of wheelchairs when people come up to us and say, ‘Hey, we’d like to use it, but it’s already reserved,'” said Zach Zehr of the Estes Park Mountain Shop. “He will donate his units to us so we can continue to do what we do for free and extend that service to those in need.”

According to the foundation’s website, Sam Schneider was a 19-year-old avid mountain biker just starting his collegiate career at Fort Lewis College. At the end of November 2019, he began to experience pain in his neck and hips, but he thought it was due to a very active couple of days skiing and playing basketball, but after several visits to the doctor’s office, they decided to x-ray a lump in his arm.

Schneider didn’t give it much thought as his GP had already told him the lump was just from overuse and it didn’t seem to be the cause of his pain, but it was quickly determined that the lump was cancer and Sam followed right away Colorado and was admitted to Children’s Hospital.

In August 2020, Schneider received an “all clear” scan test result, but after a short break from fighting, his cancer returned in October and he was told there was no cure due to his aggressive return and growth.

“Sam passed away on February 16, 2021 in the comfort of his home and in the arms of his family,” the website reads. “He will be greatly missed, but we continue to honor him and his desire to raise awareness about Ewing’s sarcoma in hopes of providing others with better early detection, as his cancer has been detected well beyond metastasis, which is what happened with Ewing -patients is so common.”

To reserve this all-terrain wheelchair for free, call the Estes Park Mountain Shop at 970-586-6548 or visit www.EstesParkMountainShop.com/Summer-Rentals.