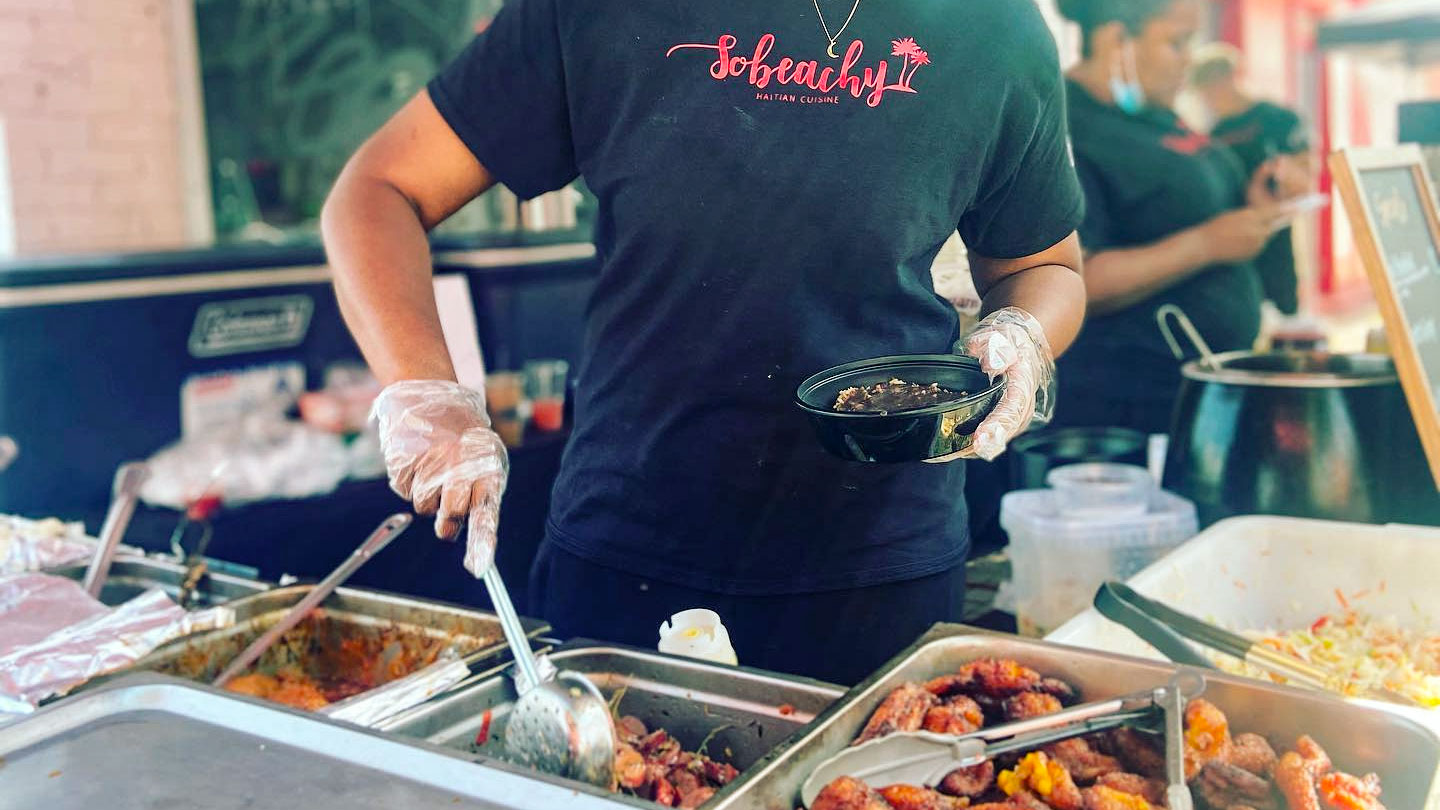 Yields on Pratt Street Market: Exciting news for everyone who lives, works and plays downtown – this pop-up lunchtime market is officially back every Thursday from 11am to 2pm through September 29th. Grab a friend or colleague and head to 10 E. Pratt Plaza (on the corner of Light and Pratt) to explore a rotating selection of local vendors including Craving Potato Factory, Dear Globe Coffee, Delmarva Popcorn, Lattimore’s Funnel Cakes , SoBeachy Haitian Cuisine, Wonderbooks and Vegan Soul Bakery. Though suppliers change from week to week, you can count on a regular list of baked goods, specialties, and artisanal items.

“For the past several years, Pratt Street Market has provided those who live and work in the Central Business District with a fun way to break up the traditional workday, and we’re pleased to announce that it’s officially back,” Downtown Partnership of Baltimore President Shelonda Stokes said in a statement. “As downtown Baltimore continues to welcome its businesses into offices, we’re excited to bring this initiative back — to foster community and foot traffic in the heart of our city.”

Current Space Introduces Outdoor Bar: Thanks to a newly granted liquor license, you can now enjoy a beer, glass of wine or a refreshing cocktail outside at Current Space in the Bromo Arts District. Beginning tonight, the bar – which will help subsidize and expand the program of the artist-run gallery and studio – will be open Wednesday through Saturday from 5pm to 11pm in Current Space’s leafy courtyard. Special celebrations planned to celebrate the opening include performances by trumpeter Brandon Woody, DJ Brooks Long and DJ Ned Ryerson.

“This license is a big deal for us,” Michael Benevento, co-director of Current Space, said in a press release. “It can provide financial sustainability and resilience for running the arts space, employment opportunities, funding for the arts, and more regularly scheduled programs. We will be open for you on additional nights [can] Or just meet up with friends for a drink in the courtyard and check out the exhibition.”

Open seasonally from April to October, the bar offers a selection of local craft beers, natural wines and seasonal cocktails such as Full Bloom – a hibiscus rose creation with Oaxaca rum and fresh mint.

“Our menu is inspired by our travels and road trips,” said Co-Director Julianna Hamilton. “We tested recipes for months… We wanted to offer things that felt relaxed and summery—like you were hanging out in a friend’s backyard.”

Daddy kitchen: Baltimore County locals went nuts when co-owners Alex Perez and Berry Clark recently took to Instagram to announce that they would be expanding their Afro-Caribbean restaurant with Latin influences to Owings Mills in the coming months. According to the Baltimore Business Journalthe second location of Papi Cuisine— the restaurant currently operating out of South Baltimore’s Riverside — will take over the former Don Pablo’s premises on Park Drive restaurant. Not only does that mean the vacant space will get a new tenant, but it will bring some local flair to an area historically dominated by chain restaurants. While opening details have yet to be confirmed, we can expect the restaurant to feature fan favorites like crab cake egg rolls, mac and cheese, and honey jerk lamb chops.

5.8.-28.8.: Maryland Vegan Restaurant Month
Restaurant week in Baltimore may have just ended, but another dining activity has just begun. Maryland Vegan Restaurant Month returns for its tenth biannual campaign, during which a number of Baltimore and DC restaurants will offer plant-based dishes for vegans and omnivores. Unlike a traditional restaurant week, which offers a fixed-price menu, participating establishments are encouraged to create a selection of plant-based items to be featured specifically during the vegan weeks.

“We’re just excited to promote plant-based eating wherever we can,” organizers Samantha Claassen of Golden West Café and Naijha Wright-Brown of The Land of Kush said in a joint statement. “We started this because we wanted to highlight all of the vegetarian restaurants in our area and it has since grown into omni restaurants that now see that there is a huge demand for plant-based dishes.”

4.8.-7.8.: Fourth Anniversary Celebration of the Guinness Open Gate Brewery
The party celebrates four Years of the Guinness Open Gate Brewery – which began its first round of celebrations at the end of July – will continue with a whole host of events this weekend. A four year anniversary is often seen as a ‘fruit or flower’ anniversary and Guinness is taking this theme to heart with the release of a Fruits & Flowers range of experimental beers. Among them are Lemon Lavender brewed with dried lavender, lemon puree and black tea; and a passionfruit jalapeno beer inspired by a CANE Collective blender of the same name.

All weekend long, guests can enjoy these sips, live music, custom beer-inspired chocolate truffles from Charm City Chocolate, and exclusive anniversary items at the retail store. Also, stop for a beer-themed dinner on Sunday. Admission is free, but admission to guided tours and the beer dinner must be purchased in advance.

8/6: Summer Luau with Chuck’s Trading Post and Baltimore Spirits Co.
Hampden Restaurant and Bodega Chuck’s Trading Post will be teaming up with neighboring distillery Baltimore Spirits Co. this Saturday for a summer luau. Expect a suckling pig and a small selection of fun cocktails to go with it. The event will take place from 4pm to 8pm at the Union Collective, where the distillery is located.

8/13: Charmery’s ninth anniversary menu
Happy Birthday to the Charmery! The popular Baltimore ice cream company is celebrating nine years this summer. And just to mark the occasion, the team is launching a special menu of limited-edition flavors – some supporting local charities – all of which are a nod to the number nine. On Saturday, August 13, the fun menu includes The GOATstachio #9, created in collaboration with Ravens kicker Justin Tucker, featuring pistachios, raspberries and white chocolate (10 percent of proceeds go to the Baltimore School for the Arts ). You will also find the new Head Like a Mole made in collaboration with Carlos Raba, chef and owner of Clavel. With a name that’s a nod to the Nine Inch Nails track “Head Like a Hole,” the flavor features Chocolate Mole Ice Cream with Canelitas Cinnamon Cookie Bits. (Ten percent of proceeds go to Guardian Gym, Raba’s non-profit jiu-jitsu community).

“We just want to do our part to support this amazing community,” David Alima, owner of The Charmery, said in a statement. “Whether it’s through our ice cream or supporting local charities through special flavors, it’s all part of our love for Baltimore.”

Not only can guests who visit any Charmery location on August 13th sample these limited-time flavors, they also receive a free baby scoop and free ice cream-themed temporary tattoos with purchase.