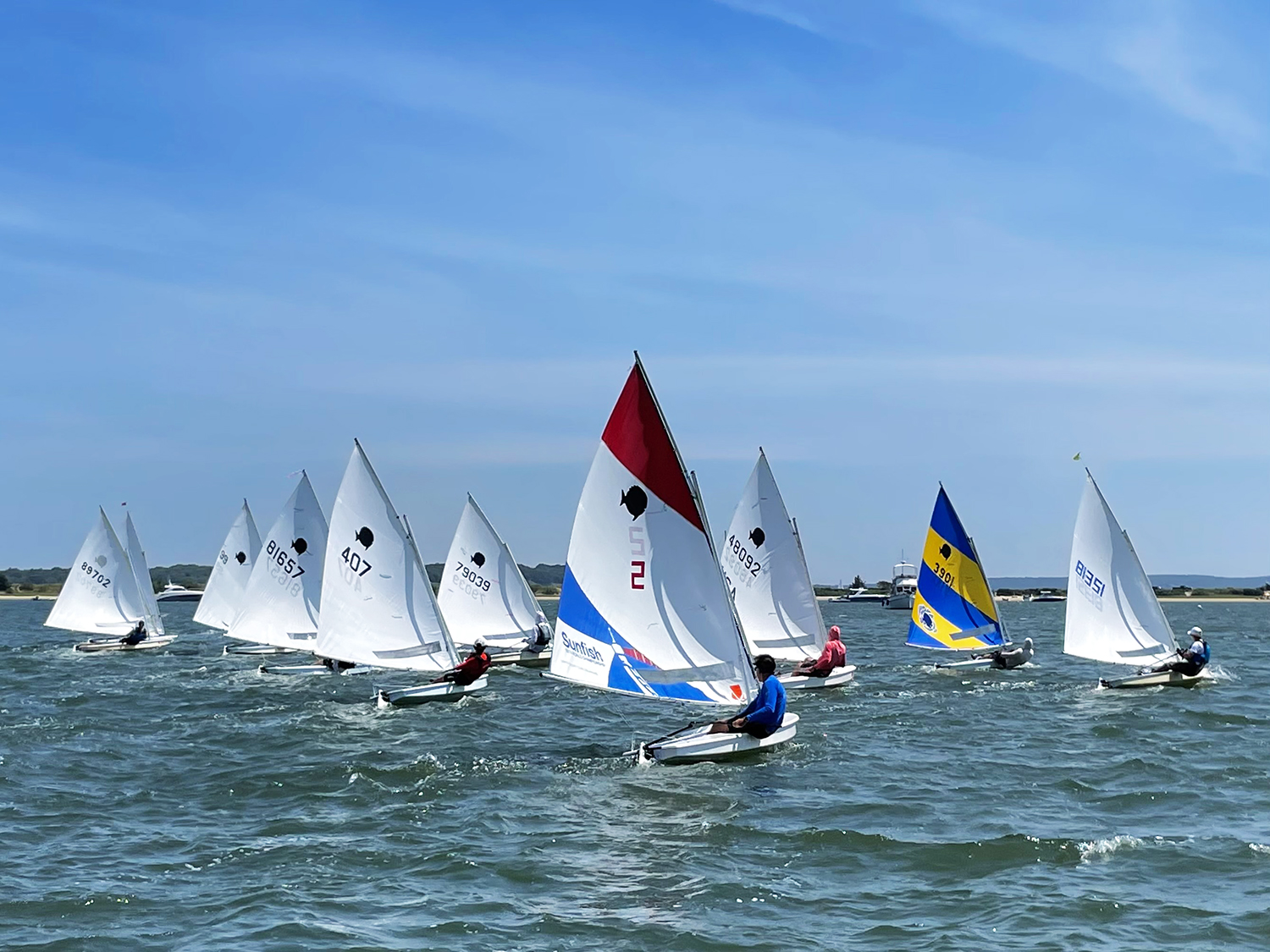 As a sailor, I always look at weather and wind forecasts. For all of last week, the wind forecast for West Neck Harbor at 2 p.m. Sunday, the start time for the Menantic Yacht Club’s Sunfish Races, has ranged from 17 to 25 knots.

Knowing my limits, I chose to hunt on a boat rather than spend a hard day catching a sunfish. At the end of the day, it was a wise decision. I didn’t need painkillers or a massage therapist, but many of the sailors did, especially as activities continued ashore after the Men’s Yacht Club Event (MYCE) and Ladies’ Yacht Club Event (LYCE) races.

Rob Bethge and I crewed a pursuit boat; The other was directed by Matt Fox, with Rita Gates and Betty Bishop as crew. We knew from the start it was going to be a tough day. Of the 19 boats that started, only 14 made it into the last race. There were a number of rollovers, falls and broken parts. During the first race, Betty jumped overboard to help Ellen Leonforte and I jumped over to help Mary Vetri, who walked over and ended up wrapping the sheet around herself.

She was not in danger but cautiously decided the wind was too strong and climbed aboard the pursuit boat while Rob Bethge sailed her boat ashore.

Then Matt and his crew towed Alicia Rojas to the beach at Wades Beach. Dave Olsen also retired after the first race because of the strong wind. George Zinger is one of only two MYC sailors to always wear a helmet and that came in handy when his own boom hit him in the head.

He was fine, but sailed to shore. Denise Fenchel got caught in the committee boat’s anchor line, was blown into the boat, punctured her sail in two places and still managed to finish all six races. Kate Duff went over and her bottom spar broke, but she managed to sail back to Wades Beach. Paul Zinger had to repair his rudder on land and just managed the second race. And all this was just the first race.

The above mishaps did not hamper the competition in the slightest and the worst of the mishaps ended with the first race. From the pursuit boat I could see the leaders constantly changing position. Peter Beardsley had an excellent day finishing 1st in five races. Lee Montes was a close second, with a first place finish. Doug Rose was third and John Modica fourth. Again, where’s Charlie – oh, in number 7?

I’m really impressed by how much Will Lehr has improved; on a really tough day he finished 5th. Congratulations everyone.

Commodore Pete Bethge was the Principal Race Officer (PRO) on Sunday. Also aboard the Committee Boat were Betsy Colby, Marian Thomsen and Sallie Bethge. The race committee ran six races, changing courses, ending around 4:00 p.m. Thank you to everyone who did an excellent job as always.

After the races, Pete and Sallie were back on land in time to host the LYCE and MYCE, followed by the after race party. The Commodore looks forward to judging these land events each year, including golf putting over terrain with many obstacles such as tree roots and rocks, basketball hoops, bean bags and Frisbee tosses.

Not only did Peter and Lee take 1st and 2nd place in the actual race, but they were tied on points in the MYCE. Peter held on to much applause after three intense playoff rounds. Kate Duff won the LYCE. Congratulations.

Ruth Hakansen and her daughter Chloe shared a boat, did two races and then sailed around for fun. To the sailors who ended the day early, kudos for knowing their limits.

Many thanks to the Bethge clan for throwing a great party with gourmet food. Thanks also to all participants for the delicious desserts and side dishes. Everyone had a great time and probably a deep sleep on Sunday.

We are a very cozy club, open to all, no fees, no fees and no clubhouse. The sailing is great, the camaraderie is great and we’re just having so much fun. All sailors, from beginners to experts, are welcome. Simply show up in West Neck Harbor at 2:00pm every Sunday through Labor Day, report to the Race Committee, give your full name and sail number, be sure to bring your life jacket and protect the Chase Boat crew , be fully vaccinated.

I’ll see you on the water.