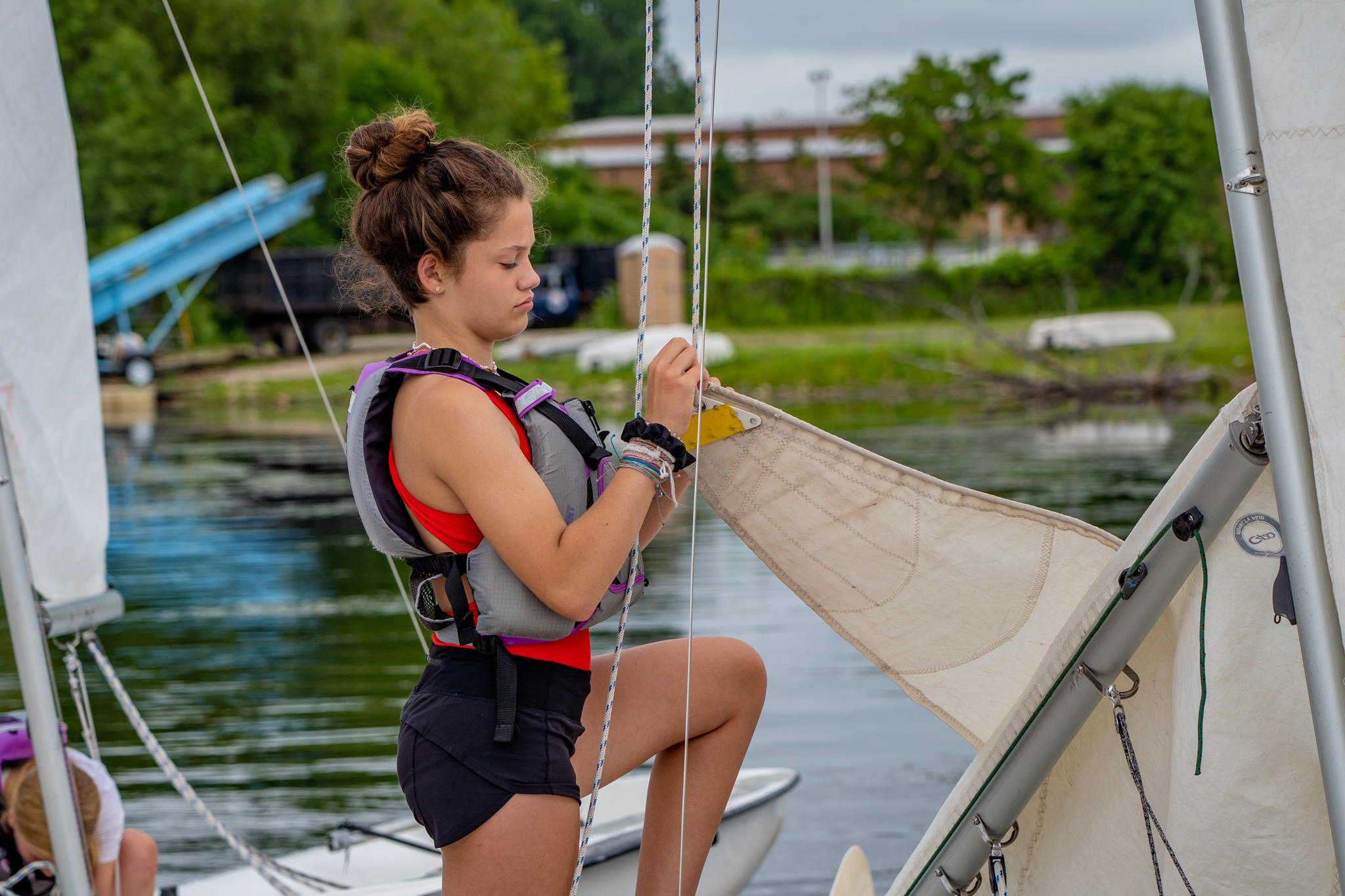 Nina Micheli prepares the boat before the sailors enter the water. Photo by Rachel Luke.

Sail Training Foundation students can expect one thing for sure on the first day of class: the boat will capsize.

“On the first day,” said Instructor Keely Troup, “we have to do both a swim test and a capsize test before we can put her on the water.”

Troup has been sailing since she was 7 and teaching since she was 15 making this her fourth year. As co-leader of the program, she and the other teachers – all aged 19 and under – teach all classes in the school.

While explaining the capsizing exercise, she said that the first week of the two-week courses includes more such activities as the children become familiar with the boats. The second week is more relaxed and the instructors are more focused on getting the students out on the water as much as possible.

Barring a storm or wind speed exceeding 35 miles per hour, the best place to learn is on the water, Troup said, so instructors try to limit lessons on land to a maximum of 25 minutes each day. Especially when classes are geared towards older and more experienced students, getting on the water as quickly as possible will keep them more engaged and focused.

Linnea Kennerhed, a 12-year-old student who has been sailing for five years, said it’s the best thing about sailing.

“I just love being on the water,” she says.

The Sail Training Foundation offers three courses, all taught by Troup and the other instructors. The two daily classes have 18 students each: one with younger children on individual boats and a second with two to three students per boat. The adult third class meets once a week in the evening and is limited to 14 people.

But trying to sign up for any of these is a mess in the spring when registration begins. The waiting lists for each session — there are four daily sessions and one adult session each summer — are always long, Troup said.

But students seem to think it’s all worth it. When I asked one attendee, Fritz Kremer, what his favorite part was, he just said “sailing,” with one of the biggest grins I’ve ever seen.

Many of the children and parents, Troup said, treat the classes like summer camp or childcare and attend multiple sessions. While I was there, one of the students looked really dejected when she told Troup that she couldn’t come back the following week.

The relationships between the children and the teachers are exceptionally close. Boat assignments in the senior grades are very competitive, Troup said, and some of the Door County students have even switched schools to be in the same school as their sailing buddies.

The whole time I was taking an afternoon class, boats would sneak up on the crash boat I was on with Troup to ask if I could change boats to ask what time it was (their consistent reply was “Playtime”) or to borrow sunscreen. One of the students who competes, Olive Goettelman, takes both morning and afternoon classes and spends more than eight hours each day with Troup.

“She’s a better racer just because she’s on the water so much,” Troup said. “She just won our regatta the other day.”

Being on the water is essential, Troup kept saying, because there’s no better way to learn.

Some of the sailors are siblings or cousins ​​who are spending a few weeks or the summer with their grandparents in Door County. She said she often sees these grandparents sitting on their porches across the canal and watching their grandchildren’s adventures.

“We’ve had issues in the past with drills capsizing and people calling 911 thinking we were actually capsizing,” Troup said. “Usually it’s the grandparents [who are] worried about their own children.”

But they all take it easy, she said. The coast guard knows the sailing school, as does most of the people in the marina.

Troup will be starting her freshman year of college in a few weeks, cutting her stint as an instructor this year — which will likely be her last. When she said she was leaving 10 days early and would miss last week, the mixture of bittersweet sadness and a hint of guilt at her departure was evident.