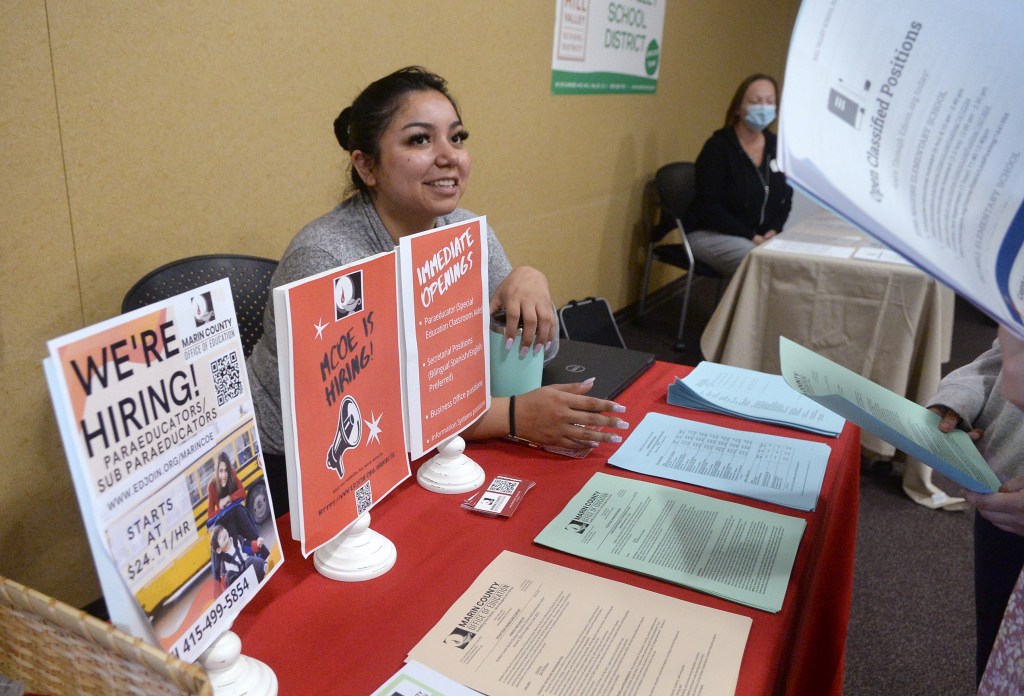 With the new school year starting in less than two weeks, the hiring door at Marin Public Schools is wide open for both teachers and support staff.

All of the county’s 17 public school districts have 137 classified and 95 certified positions open, according to Marin Principal Mary Jane Burke.

“All districts in Marin County are actively working to fill all vacancies,” Burke said. “Our goal is to always fill vacancies with the best qualified candidates.”

The county held a job fair Thursday for classified workers at the Marin County Office of Education headquarters in San Rafael. Fairgoers gathered at tables set up for the Mill Valley, Nicasio and San Rafael City school districts, as well as tables for job vacancies at the county education department.

“I’m applying for a teaching assistant position, part-time while I go to school,” said Miriam Pazos of San Pablo, a fair attendee.

Pazos, 22, plans to complete a teaching and masters degree at Dominican University of California in San Rafael by June. She plans to start teaching at the elementary school in the fall of 2023, once she has received her degree and credentials.

“I just wanted to see what’s out there,” she said of the job fair.

“I love the whole Marin County educational experience so much,” Maggiore said. “It’s an incredible system that honors students and engages them in the process.”

Cecilia Perez, director of English learners at San Rafael City Schools, said one of the top priorities for her district’s hiring is teaching aids for transitional kindergartens.

Transitional Kindergarten is a public school program for 4-year-olds whose fifth birthday falls between September 2nd and February 2nd. The deadline used to be December 2nd, but it’s being extended by two months this year and will be extended each year until all 4-year-olds are eligible.

“We are looking for eight teachers — one for each TK class,” Perez said, noting that the district expects to add more transitional kindergarten classes each year. “We’re super excited.”

Perez said the District of San Rafael has also created pathways for teaching assistants to advance their careers and take courses to earn their teaching credentials and eventually advance to qualify for a recognized position.

“We’re especially looking for people in the community when we can,” Perez said. “People who have gone through our schools.”

According to Josie Chavez, a staffer at the county office, the county is hiring with the Marin County Office of Education for seasonal naturalist and maintenance positions at Walker Ranch, an outdoor education program.

“We have a lot of great people in our community,” Campbell said. “We would like to use them in our schools.”

The new school year begins the week of August 15, with most districts beginning August 17.