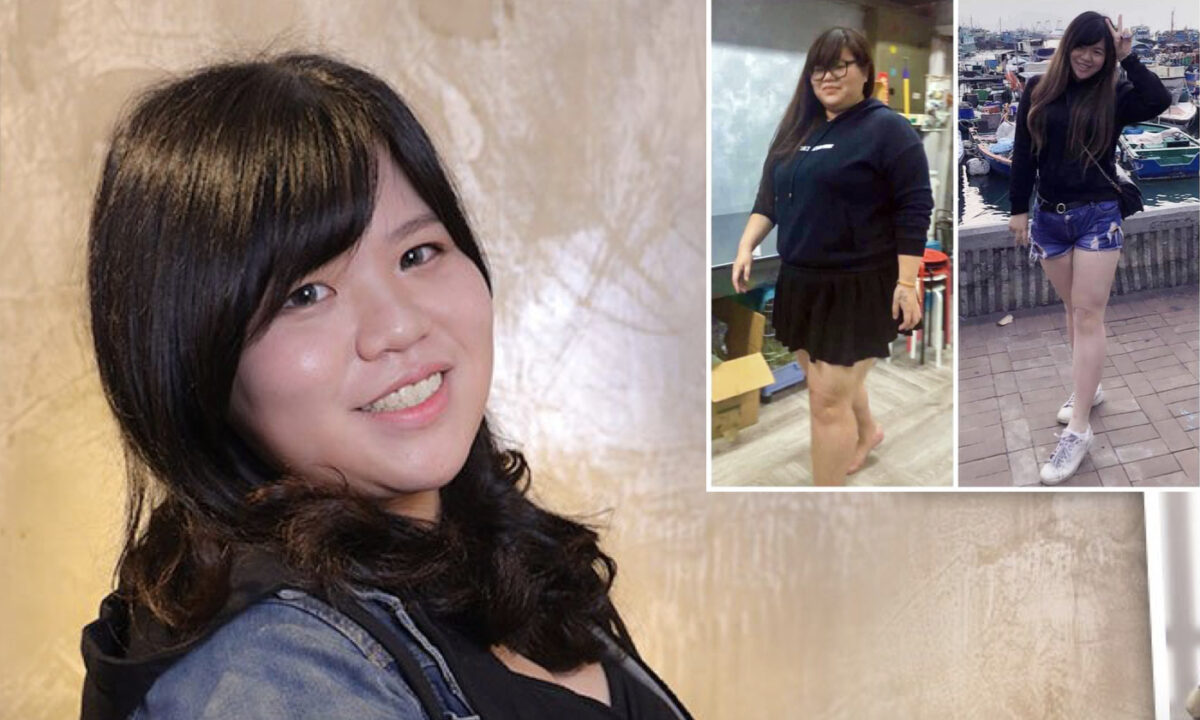 The first time I met Cokimi was at a “pop-up store,” a store that was set up for a limited time. Back then, she was a saleswoman who always wore a cute smile. Today she is both sunny and confident.

Two years ago, Cokimi was depressed. She was overweight and often encountered obstacles in her relationships and career.

An on-camera experience made Cokimi decide to lose weight. With perseverance, she lost almost 100 pounds and started living her life again.

She continued, “I used to have low self-esteem and rarely left home. When I went out it was always point to point. I traveled back and forth between home and work and did not attend other meeting places. Now I hike, fish and eat out with friends more often and I’m so happy to finally be able to buy a dress size I can wear on the street!”

Cokimi has been her family’s favorite since she was a child. Her parents cooked big plates of delicious food for her. Relatives and friends praised her, saying she “looks cuter when she’s fat”.

She didn’t realize that “being fat” was a problem.

By the time she was in her 20s, she and her boyfriend were madly in love. Whenever she had time, she went in search of delicious food, and her body shape became increasingly inflated. By 2018, her weight reached 260 pounds; Back then, it was almost impossible for her to buy suitable clothes in Hong Kong.

Cokimi gradually realized that the health problems caused by obesity are not only physical problems, but also emotional trauma.

She revealed that her menstrual cycle was abnormal due to her obesity and she often had back pain. She even had trouble walking, unable to run to catch a bus.

Her boyfriend left her. Because of her obesity, she also lost her job and thus her source of income.

Finding a new job was a pain. “I’ve applied for many positions but haven’t received an answer. One incident made a deep impression on me. Right after I finished an interview, I went to the toilet. That’s when I overheard some girls talking behind my back about me destroying the company’s image. That made me very unhappy.”

Faced with the intense pressure, it turned out that her way of relieving stress was “eating”! “The more stressed I was, the more I wanted to eat. I couldn’t control myself; I kept eating.”

Back then, she could eat the portion intended for five people in one meal! She recalls spending all her money on shumai and beef balls (Chinese snacks) when she only had HK$20 (US$3) left in her purse.

She never thought she would rely on credit cards for a living, paying interest even for a cup of coffee. She said helplessly, “The most frightening thing was that depression followed me like a nightmare. Every day when I woke up, my eyes were filled with tears. At that time I didn’t know what life was about…”

Cokimi, struggling financially, was willing to try any job. When she saw some popular videos of “big belly kings” on the internet, she thought she might as well try to be a “big belly king”.

So in 2019, she accepted an invitation to shoot a short video about the challenge of completing a giant hamburger in 60 minutes. “You can stand in front of the camera and eat; why not?”

She accepted this challenge out of curiosity.

Unexpectedly, after the film aired, netizens’ comments were overwhelmingly negative. Many of them mocked her body shape, and the comments were also very ugly. “I was depressed. I didn’t dare to go out and meet people during that time. I didn’t even dare to log on to social media platforms.”

After a while she decided to turn sadness and anger into strength and made a plan to lose weight.

She said she’s also had exciting experiences in her weight loss process: “I’ve tried eating just one apple a day, drinking only water, and tried diet pills and diuretics; I ended up being taken to the hospital once.”

After a period of indiscriminate use of inappropriate weight loss methods, she learned to lose weight healthily: “I gave up my favorite junk foods and sugar. The staples in meals are mostly protein and fiber, and I eat small meals frequently. I also take some meal replacements to speed up weight loss.”

She believes muay thai is an excellent total body exercise with core muscle work, which works better for her. “I haven’t exercised in decades, which is hard now. But I’ve learned to train progressively from easier to harder, starting with stretching, warming up, and slowly working your way up to moving arms and punching. I have found that after a sweat it is very comfortable every time. It’s difficult at the time, but you’ll be happy if you persevered!”

After a year of hard work, Cokimi successfully lost 100 pounds. What she learned the most in the process was how to overcome psychological barriers. “When I started losing weight, I was very stressed. The more I wanted to control my eating and the more I suppressed it, the more I ate. The weight did not decrease and even increased! Then I learned to relax, not put so much pressure on myself and control my diet. It’s okay to eat ice cream or drink bubble milk tea occasionally. Losing weight should be an enjoyable experience instead of suffering. It doesn’t hurt to give myself a break every now and then.”

She also met like-minded friends on her weight loss journey. They exchanged weight loss tips and supervised and advised each other.

Cokimi’s family is happy about the changes in their daughter and would also respond to her new eating habits. They used to like to add sugar to cooking, but now they cook milder dishes. Cokimi said, “Eating lighter is better for health. I think these are all happy things. My weight loss can also inspire other people around me to become healthier.”