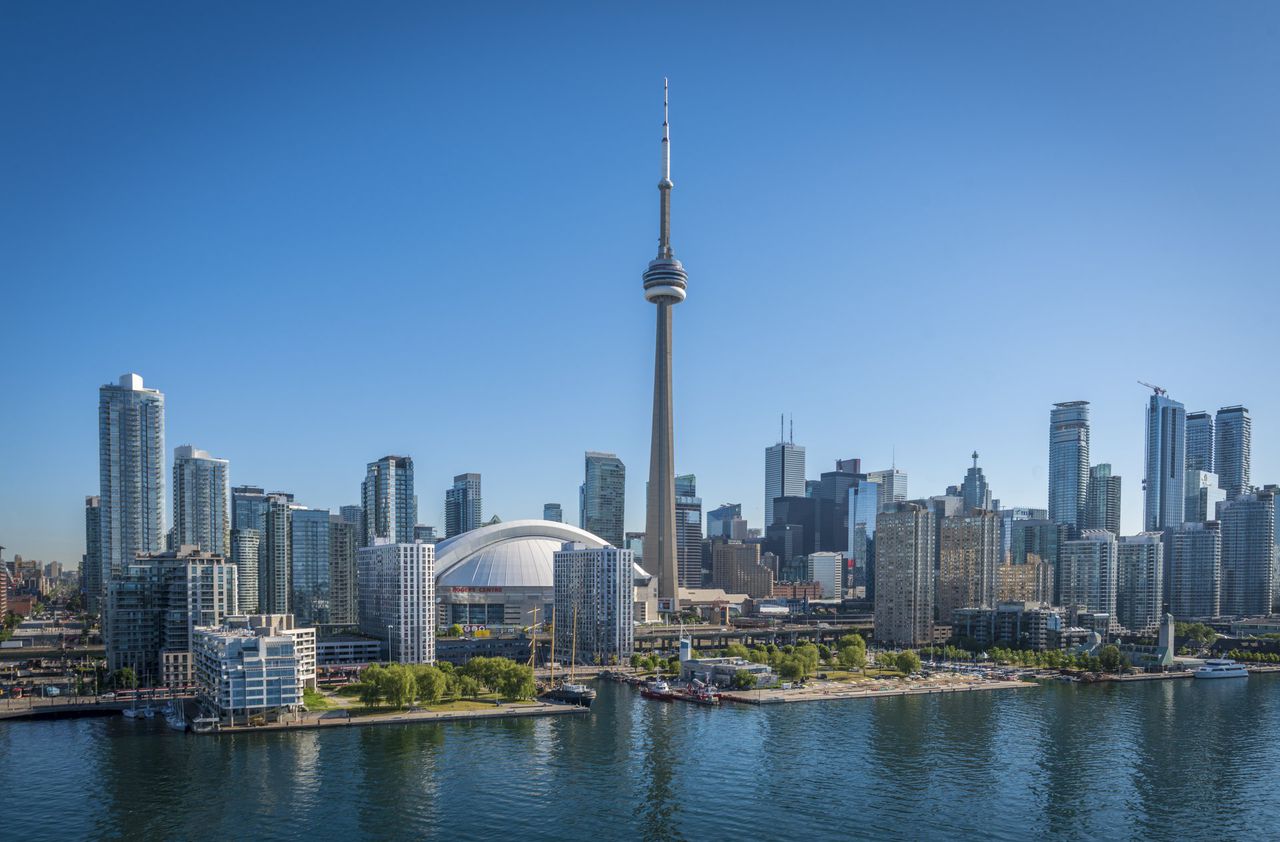 If you’re looking for the ideal getaway – one that’s easy to get to and offers a fun mix of cultural attractions, big city excitement and culinary adventures – look north.

Toronto, the fourth largest city in North America, offers plenty to see and do year-round and attracts approximately 27.5 million visitors of all ages annually. Our recent four day trip to this multicultural city was packed with great activities, amazing meals and lasting memories. Also, we’re happy to report that Toronto is a budget city where the US dollar is on the rise.

Eager to visit somewhere outside of the US that wouldn’t require a transatlantic struggle, we chose Canada’s largest city for our late spring getaway. After arriving at Toronto Airport after a comfortable direct flight of 1 hour and 20 minutes, we took the modern and cheap UP Express, which took us to Union Station in less than half an hour, downtown to our hotel, the Cambridge Suites. We checked into our centrally located accommodation and immediately made our way to the world-famous CN Tower on foot. We had purchased a great value five attraction CityPASS and this was our most anticipated attraction.

The landmark of the Toronto skyline attracts more than two million visitors each year and is home to several observation decks, a revolving restaurant and an entertainment complex. Although we made a reservation ahead of our midweek visit, we were pleasantly surprised that the crowds weren’t too intense, and we enjoyed the stunning views of the city from above. You can get a sense of just how big Toronto really is from the expansive views afforded by the CN Tower.

And while it’s reminiscent of New York City, Toronto is actually much smaller (population 2.8 million versus NYC’s 8.5 million). British actor Peter Ustinov once quipped that Toronto is “a kind of New York run by the Swiss.” That means it’s cleaner, feels safer, and runs much more efficiently (public transit is a breeze here). Also, the people are invariably helpful and pleasant. There are no downsides to a short break here!

There are many things worth doing and seeing in this fabulous city. Here are some we can recommend:

· Watch a broadcast: Toronto has a thriving theater district with several beautiful, historic venues, including the 1907 Royal Alexandra Theater where we saw an amazing, fun one-man show called Boy Falls from the Sky, starring Jake Epstein who played Spiderman on Broadway have as well as the genesis of the role of Gerry Goffin in Beautiful: The Carole King Musical. The big buzz on stage this summer is Harry Potter & The Cursed Child, which has just opened at the Ed Mirvish Theatre. With an all-Canadian cast, it is billed as the largest theatrical production in the city’s history. There are many other upcoming shows in Toronto worth checking out (Hamilton coming to town in early 2023).

· Eat to your heart’s content: We had many great meals during our stay, with a few real highlights. Finally, number 1 on our list was sap, dubbed “Canadian comfort food.” We loved it so much we ate here twice, with their traditional Chicken Pot Pie and Fish & Chips earning rave reviews. They also have a delicious homemade dessert; Check out the Canadian butter tart. Sap also offers a popular weekend brunch. Another culinary highlight of our visit was an elegant lunch at Eataly’s Trattoria Milano in the popular Manulife Centre, a shopping and dining hub. The casoncelli alla Bergamasca – handmade ravioli filled with veal braised meat and ameretti in a light butter sauce – was just as convincing as the incredibly attentive service from our waiter Mario. Founded in 2002 by Italian Oscar Farinetti, Eataly has a unique concept: to collect quality food at reasonable prices in an informal place to eat, shop and learn. The first Eataly opened in Turin, Italy in 2007; There are now more than 35 locations worldwide. Enjoying a meal here is a unique and unforgettable experience. If you’re looking for a special dinner, head to Sassafraz, a lively restaurant specializing in French-inspired Canadian cuisine. We took it easy at breakfast and enjoyed a quick, tasty meal at the Sunset Grill most mornings. However, the go-to place for coffee and donuts is Tim Hortons. This is the Dunkin of Canada (but actually better); There are more than 150 locations in downtown Toronto alone. There are, I should also mention, a few “Tim’s” in the US, including one in South Jersey (Stratford).

· Get cultivated: We enjoyed many of the city’s cultural attractions during our short break. The Immersive Frida Kahlo was a real highlight – a dazzling glimpse into the art and soul of this talented and tormented artist. There is also an immersive Klimt exhibition in the same building that explores the colourful, one-of-a-kind work of Austrian artist Gustav Klimt. We loved the Royal Ontario Museum which showcases art, world culture and national history and is the most visited museum in all of Canada. Included as part of our CityPASS ticket, we were quite taken with the number of compelling exhibits. Don’t miss the four massive totem poles, one of which at 25m is the tallest known 19th-century pole of this type. (The poles, acquired in the 1920s, could only be displayed as part of a museum expansion in 1933 when the building was constructed around She). After exiting the Royal Ontario Museum, we enjoyed a leisurely stroll through nearby Queen’s Park, one of several beautiful green spaces in the heart of the city. Hockey fans should check out the Hockey Hall of Fame, housed in an 1885 bank building that was lovingly restored in the early 1990s. It houses artifacts, statistics and hockey’s Holy Grail – the Stanley Cup. The beautiful Casa Loma is another popular attraction. A Gothic Revival chateau style mansion and garden in downtown Toronto, built between 1911 and 1914 as a private residence (of a very wealthy industrialist).

· Have fun with the kids: Located right next to the CN Tower, Ripley’s Aquarium of Canada is worth a visit and is fun for both adults and children. Opened in late 2013, this is a pleasant, modern aquarium where visitors can get an up-close look at more than 15,000 marine and freshwater creatures. There’s even a jazz night included in the price of admission every second Friday of the month. Another great family attraction is Centreville Amusement Park, located in Toronto Island Park. As one of the city’s small offshore islands, it’s accessible by ferry and is also home to beaches, gardens, boating activities, and hiking trails.

· Shop until the doctor comes: There is some great shopping in Toronto, particularly in two key locations, Hudson Bay and the block-long, four-story Eaton Centre. “The Bay,” as locals call it, is huge and the city’s premier luxury department store, while the Eaton Center draws the most visitors of any tourist attraction in Toronto and is North America’s busiest mall with more than 230 shops and restaurants. For a more “down to earth” experience, don’t miss the historic St. Lawrence Market. From flowers to produce to a delicious, inexpensive lunch, this huge market has something for everyone – and all at great prices. Along the way, don’t miss the quirky Berczy Park Dog Statute, which pays homage to Man’s Best Friend. Look out for a cat that is part of the sculpture!

· Explore the neighborhoods: Toronto, like most big cities, has some great neighborhoods worth exploring. For funky-chic shops and food markets, head to Kensington. There’s also Chinatown and Greektown (also known as Danforth), as well as the Distillery District, which has transformed from a former cluster of Victorian industrial buildings into a hub of charming shops and restaurants.

Toronto is less than a 90-minute drive from Niagara Falls, which is a great addition to any visit here. (You can sometimes see the falls from the CN Tower on a clear day). Bottom Line: There’s something for everyone in this exciting, tourist-friendly city. We’ll be coming back.

Nicole Pensiero is a South Jersey-based freelance writer and a member of the North American Travel Journalists Association.