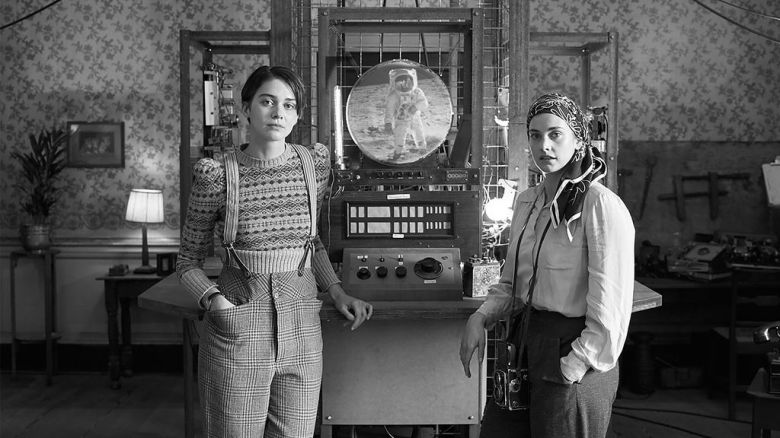 Andrew Legge’s collage-like ‘LOLA’ is an immensely clever and imaginative micro-budget time travel film in the tradition of ‘La Jetée’, ‘Primer’ and last year’s wacky Japanese marvel ‘Beyond the Infinite Two Minutes’ authentic newsreels from the time of the WWII together with fictional home videos to create a (very modern) found footage sci-fi story that feels like someone made it in 1941 or at least 2006 by Guy Maddin.

The premise is enticing enough to capture your imagination for most of the film’s brisk 79-minute run: In 2021, a mysterious cache of meticulously worked old celluloid has been found in the basement of a Sussex country house once owned by Martha and Thomasina Hanbury discovered (played by Stefani Martini and Emma Appleton respectively). It featured a first-person documentary about two beautiful and brilliant sisters who invented a machine that intercepted radio waves from the future, named the device “LOLA,” and then used their towering, oscilloscope-like device contraption to gain glimpses of the world Come.

With LOLA’s power, Martha and Thomasina fell in love with David Bowie’s music before he was born, became obsessed with Stanley Kubrick films before they were made, and learned about female empowerment at a time when many young women their age were still halfway through their lives stuck Victorian era. They also used LOLA to help Britain get ahead of the Nazis, a plan that seems to have backfired so much that Martha felt compelled to make this film as a kind of cautionary tale for her sister – a request to stop the madness in front of them time up. “I want to show you how history can be made and undone,” Martha’s words crackle over the phonograph-quality voice-over track as Legge’s debut returns to the days of LOLA’s creation and from there at newspaper speed forward shoots to rotate the screen.

Shot by Oona Menges in blurry monochrome (her images are adorned with perforated borders, faux damage, and various other types of digital wear and tear to make it look like they’ve been sitting in a box for nearly a century) and the music is sourced by The Divine Comedy frontman Neil Hannon (whose percussive harpsichord bangers give shape to the first half of Legge’s film, and whose fascist parallel-universe pop songs about the sound of marching feet and the dangers of “fraternizing with perverts” give Legge’s film his second half). sly comedy), “LOLA” scrubs through the years with little regard for conventional drama. Everything is conveyed in hindsight and with the serene restraint of a front-line report. It makes sense that Martha’s narration is neither overly impressed with LOLA’s creation nor surprised that she and her sister were smart enough to invent it, and so the film that “she makes” is able to take on a no-nonsense approach that allows it allows to skip its effects.

It’s a good thing that Martini and Appleton radiate tangible screen presence, because the form of Legge’s film doesn’t allow them much else. The snippets of footage we see are enough to tell that Martha was the more sociable and outspoken of the Hanbury sisters, while the brooding Thomasina – dangerously under the spell of her own brilliance – was less romantic in her ideas of science and humanity . But the difference between them doesn’t get a chance to go much deeper than light and dark, blonde and brunette, as Legge and his co-writer Angeli Macfarlane have too much fun dubbing archival footage (so real 1940s politicians can’t seem to do). thanking the anonymous “Angel of Portobello” who warned them of impending Nazi strikes) and urging the sisters to “Dr. Strangelove” references only they would understand.

When that fun isn’t always contagious, the creative effervescence of Legge’s masterful pastiche is strong enough to propel “LOLA” along at a steady pace and also to reward the director’s lifelong fascination with the intersection of fatalism and invention (his earlier work contains). a 2009 short film called The Chronoscope, about a fictional Irish scientist whose distinctive machine could see into the past). Almost too confident that it’s always on the verge of exceeding its welcome salute, “LOLA” zips from one sweet anachronism to the next without much emotional core, as Legge is so enamored with its primary conceit that a more conventional narrative might threaten from his distract potential.

Which isn’t to say that “LOLA” doesn’t have a plot — Martha even gets a significant romance — just that the ingenuity of re-contextualizing WWII propaganda material (for example) often feels like the main attraction. That works for the film when it’s still having fun, like in the scene where the sisters introduce The Kinks to a stuffy mid-century audience, but the seams start to show once Martha and Thomasina are separated, the History topples off its axis, and “LOLA” succumbs to the simpler demands of its story.

The genius of Legge’s design, and why his debut, despite its thinness, is more than just a cute little oddity, is that it extracts a sneaky emotionality from the bedrock of the film-within-a-film structure. One sister sees LOLA as a window, the other as a weapon. In its dying moments that are somehow inevitable and equally surprising, “LOLA” reconciles that separation with a feathery gut punch of a finale. Inventing the future is one thing, living in it is quite another.

«LOLA» premiered at the Locarno Film Festival 2022. It is currently seeking US distribution.

Registration: Stay up to date on the latest movie and TV news! Sign up for our email newsletter here.