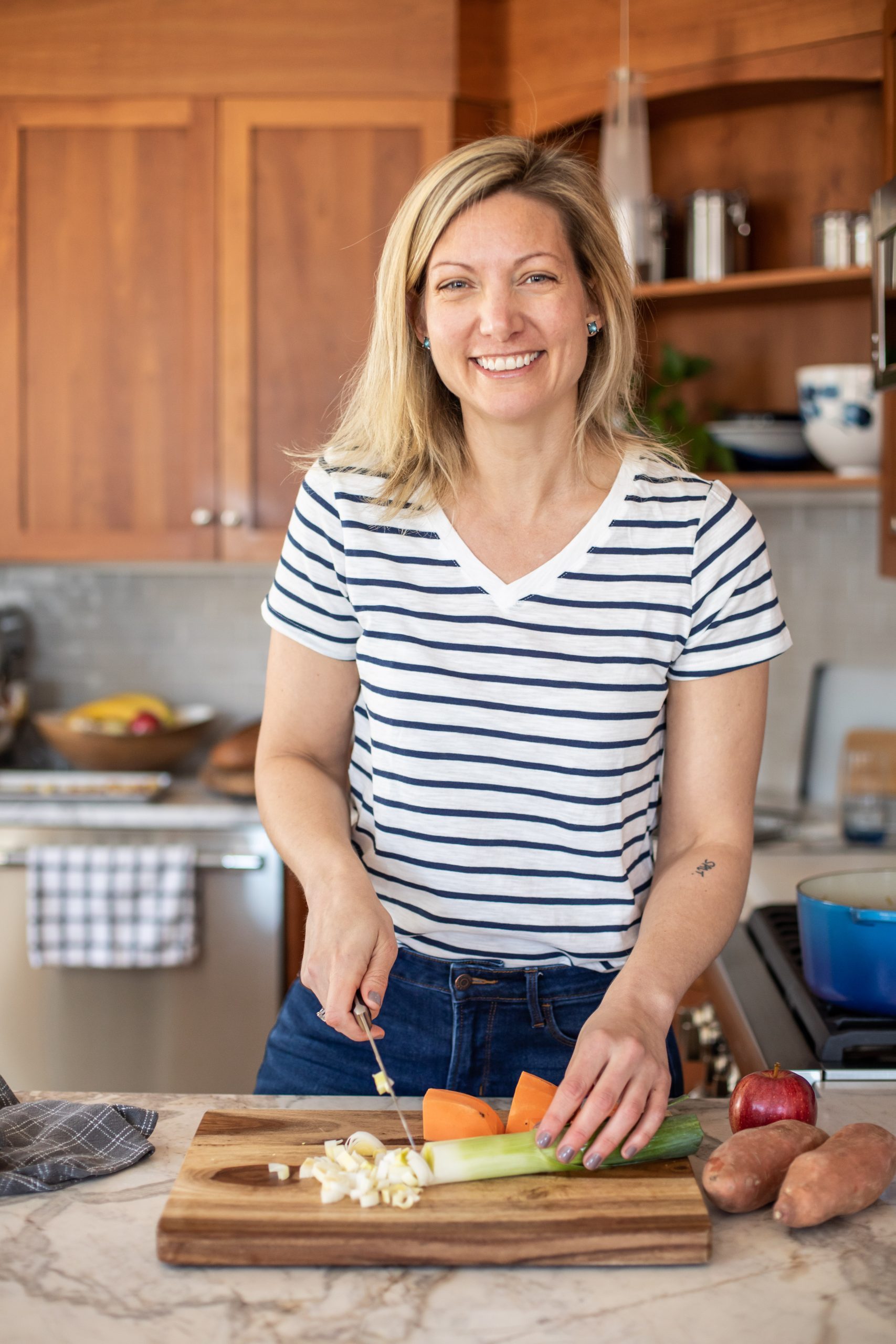 Liz is also all-in at apple picking (see our picks), cake baking, hiking to see foliage, and even leaf raking. She loves the crisp change of seasons and the nostalgia that comes with it – “I think growing up in New England is a must!” she says with a laugh. “These were things I really missed living on the west coast.”

At the time, Liz was a scientist specializing in cancer biology. But in 2012, she made the difficult decision to leave the research bench and pursue a career in the food industry. From her floating home in Seattle, she began sharing her recipes and photos on her website, Floating Kitchen.

“My kitchen and everything else was literally floating,” she says, still longing for the calm that came with waking up on the water. “I loved taking the time out every morning to have my coffee on the dock—that is, when it wasn’t raining, of course!” (See our favorite rainy day recipes.)

A centuries-old family farm and its lessons

She’s left houseboat life behind but still cooks up a storm — now using produce from Donabedian Bros., her family’s small farm and hydroponic greenhouse, which has been supplying fruit and vegetables to the Salem community since the early 1900s delivers. “It’s been in our family for more than 100 years,” she says. “And now I also work there one or two days a week. (Psst! Support local farms by joining a CSA program.)

“Seeing firsthand how hard farmers work and how much they care about their land and their crops or animals has given me a lot of respect for the farming community,” she says. “The demands of agriculture are great. We depend on these people every day.”

Growing up, she watched the older generation of women in her family cook and learned about their specialties—like her Great Aunt Dorothy’s biscuits or Great Aunt Carrie’s buns. “Food was always an important part of the conversation,” says Liz. “And not just as we approached the holidays or during family gatherings, but every day.”

In addition to her beloved orange season, Liz is thoroughly enjoying soup season. (Do you make these mistakes with soup?) Her Creamy Sweet Potato, Apple, and Leek Soup with Parmesan Croutons is her cozy ode to both.

Still a scientist at heart, she learned from previous iterations of this recipe to dial in the full flavor of fall by adding a tart-sweet apple and warming paprika and chopped ginger. And to top it off? “I have a rule that there are no naked soups,” she jokes. Cue the crunchy, peppery parmesan croutons. “I firmly believe that all soups should have a topping. It really enhances even the simplest soup recipe.” (Check out these creative soup toppers.)

A very doable weeknight dinner, this soup can be made in under an hour. And Liz thinks bowls are even better the next day. “The flavors become more pronounced over time,” she says. So save some to serve for lunch the next day.

Don’t skip the homemade croutons in this creamy soup—they add a crunchy punch! This recipe makes 1-1/2 liters of soup.

Stir in the garlic, ginger, tomato paste, salt, paprika, and pepper; cook until very fragrant, 2-3 minutes. Stir in the broth, scraping any browned bits off the bottom of the pan. Bring the mixture to a boil; Reduce heat and simmer, with lid slightly ajar, until potatoes are very tender, 25-30 minutes. Remove from the stove; cool down slightly. Process in a blender or food processor until smooth; back in the pan. Stir in cream; heat through.

In the meantime, for the croutons, preheat the oven to 350°. In a large bowl, mix the bread cubes with the Parmesan cheese, oil and pepper. Spread out in a single layer on a 15 x 10 x 1 inch. Baking pan. Bake for 10-15 minutes, stirring once, until golden and crispy. Serve the hot soup with croutons, parsley and cream.

How to Freeze Soup

Freeze chilled soup in freezer containers. To use, partially thaw in the refrigerator overnight. Heat in a saucepan, stirring occasionally; add a little broth or cream if needed.