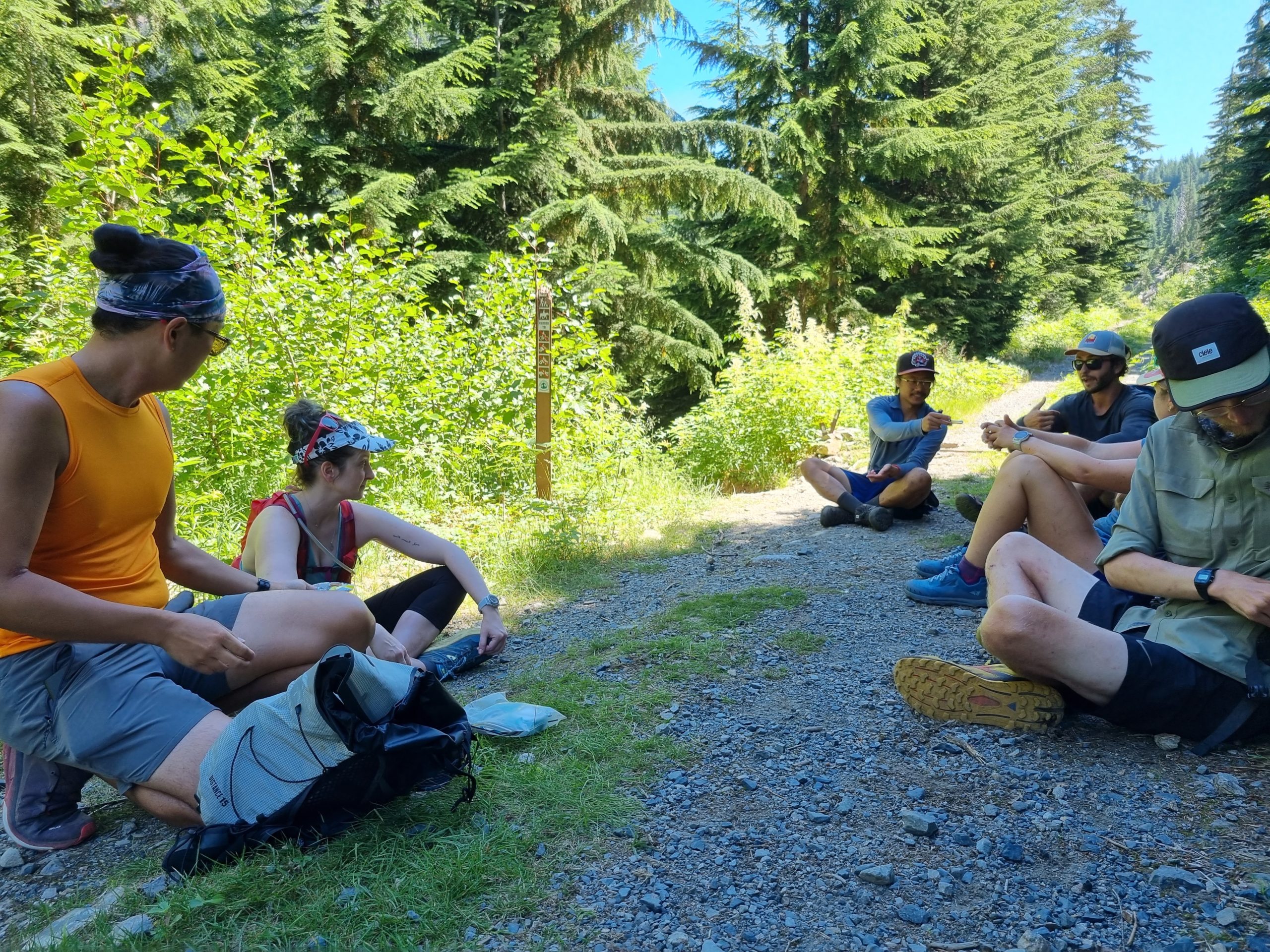 We slept in a fantastic house in our own spacious rooms and had fresh bread and coffee for breakfast. Our hosts accompanied us for the first few miles of the hike and drove us from Seattle to Snoqualmie Pass. The friend who had worn my spats 250 miles and left them at the hostel had left them in the hiking box – and of course they were gone. The hiker boxes are full of free stuff that hikers no longer want and that anyone can grab for free.

It was another hot day and I was already sweating my ass off the first ski hill up. At the top, the hosts offered us a cold beer before heading back. The others in my group even smoked some weed. Still, they walked faster than me. We met at Mirror Lake for lunch and a quick detour into the lake. Some hikers were very curious about the PCT and gave us some tips and antihistamines for the mosquito bites since all mosquito repellents were sold out at REI.

The hike was mostly in forest and while there was some elevation change, there weren’t any crazy big climbs. I got to the camp just after 7 p.m. and the others were already there. We ate dinner and drank a few fireball and peanut shots before an early start to our tents. 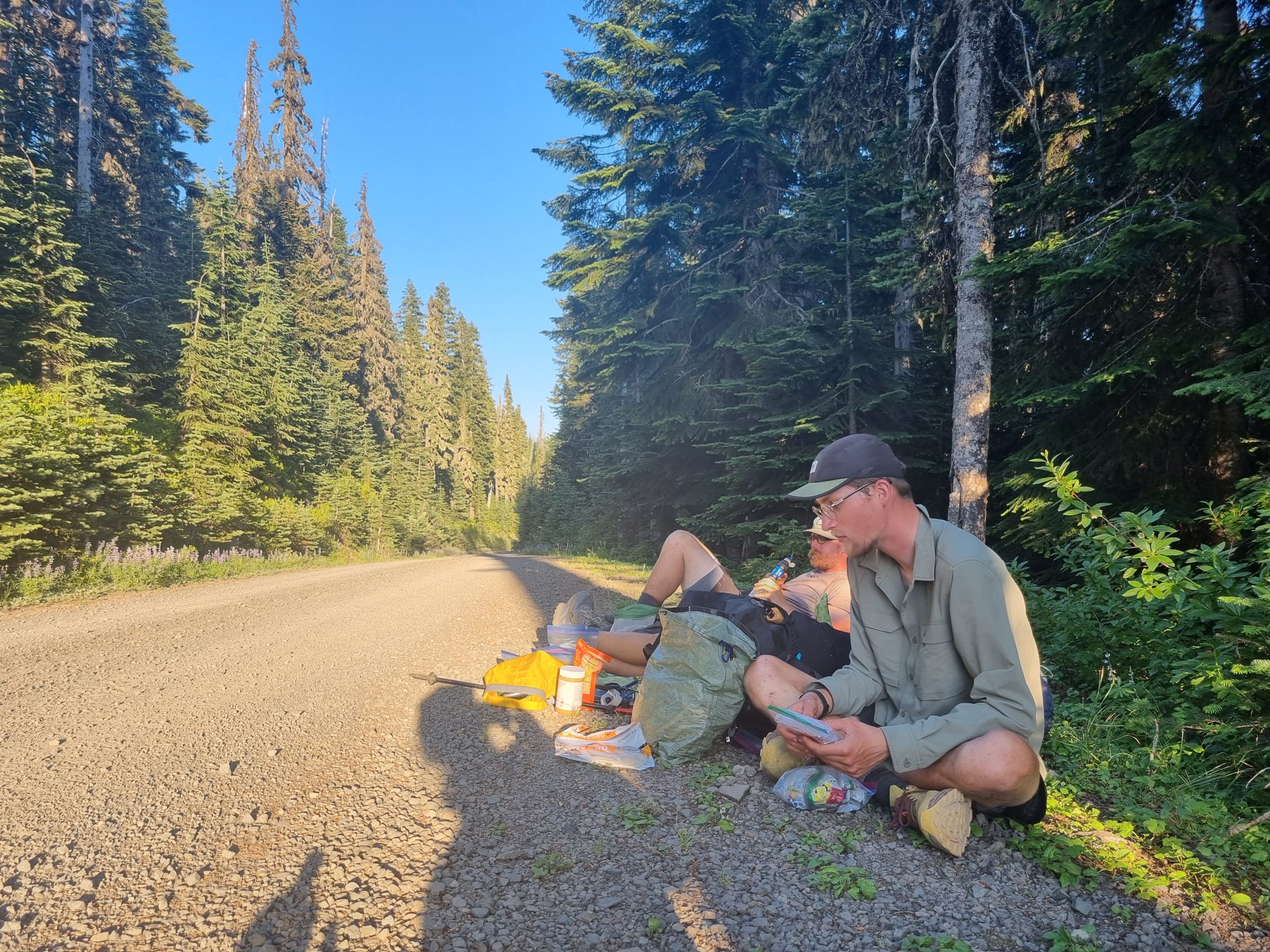 I woke up at 4:30am to some helicopters flying overhead. Turns out it’s burning just 30 miles from us. We weren’t sure how this would affect our hike.

I started hiking first and we planned our water intake for the day. On this day we had the longest water carry so far. First we had to carry 7 miles of water and from there it’s 12 miles – with several hundred feet of climbing and very hot weather. I put some music on and just rushed the 7 miles. I was the first at the creek where we wanted to take a “mega break”. The others were tired. We were mostly out in the woods so it wasn’t as bad as the days before. I also took a short break every hour.

I took a nap by the creek and when I woke up it was super hot. I left the stream at 3pm just after the others. It was a lot of slow climbing, but unusually I was ahead of the others. We intended to crash the full 25 miles, but ended up on a dirt road that had a few pitches for tents, had an unromantic dinner on the deserted road, and then just got too tired to continue. I pitch my tent on some bushes right next to the road. The camp was 3.9 miles from the nearest creek and we were running low on water so we had to get up early to have breakfast by the water. 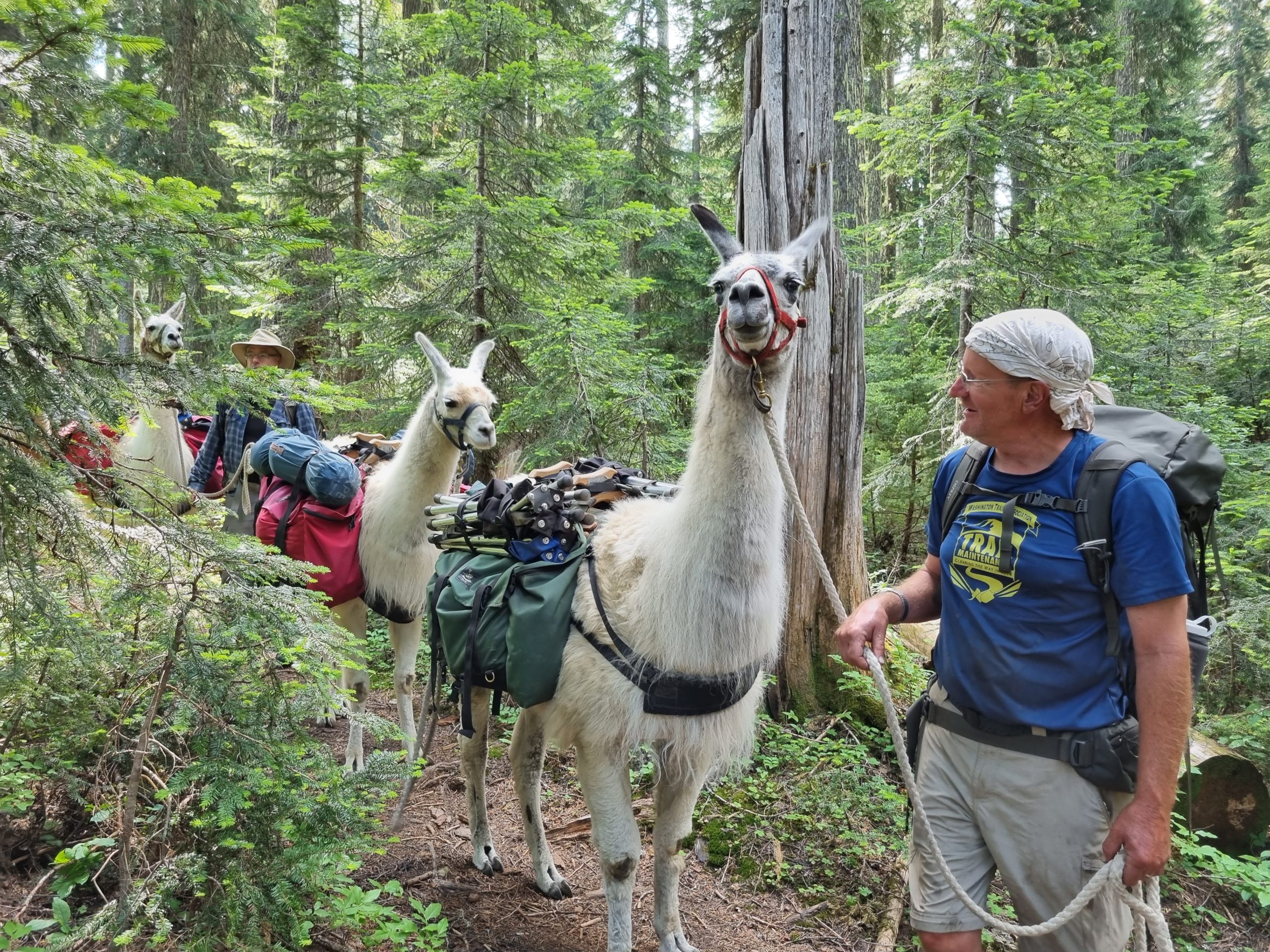 I woke up after five to a car driving past the toad I was sleeping next to and dumping sand on me.

We started the day with a hike uphill and then had some amazing views over Mt Rainier and the blue mountains. I joined the others and didn’t have breakfast until later by the creek because I ran out of water. Our day was dictated by scarce water sources: a break at the Mike Urich hut, lunch by the nearest creek, camping the nearest. At the hut we saw our first llamas on the trail.

The lunch table was in the middle of a huge fire area and there was no shade. After that we walked for hours through the burned forest and the sun was beating down. Many Nobos passed us and we chatted with many of them. Our group came up with the idea of ​​naming our gang something, and Rebound suggested the Dolphine Gang. We choked because it was such a stupid name. In the end we suggested one of us to name the trail “Dolphines number three”, obviously there wouldn’t be dolphins number one or two.

The trail went all the way up to 6200ft where the campground was but the climbs were fairly smooth. The sand and rocks were quite hard on the feet compared to walking in woods. However, everything got very dirty, and if you tried to wash your legs in a creek, they would be dirty again before you got out of the creek. I walked 0.2 miles to wash my socks (they never get clean anyway so it’s hopeless) but I dumped them and my water bag in the sand when I got back to camp. Thruhiking is garbage forever. 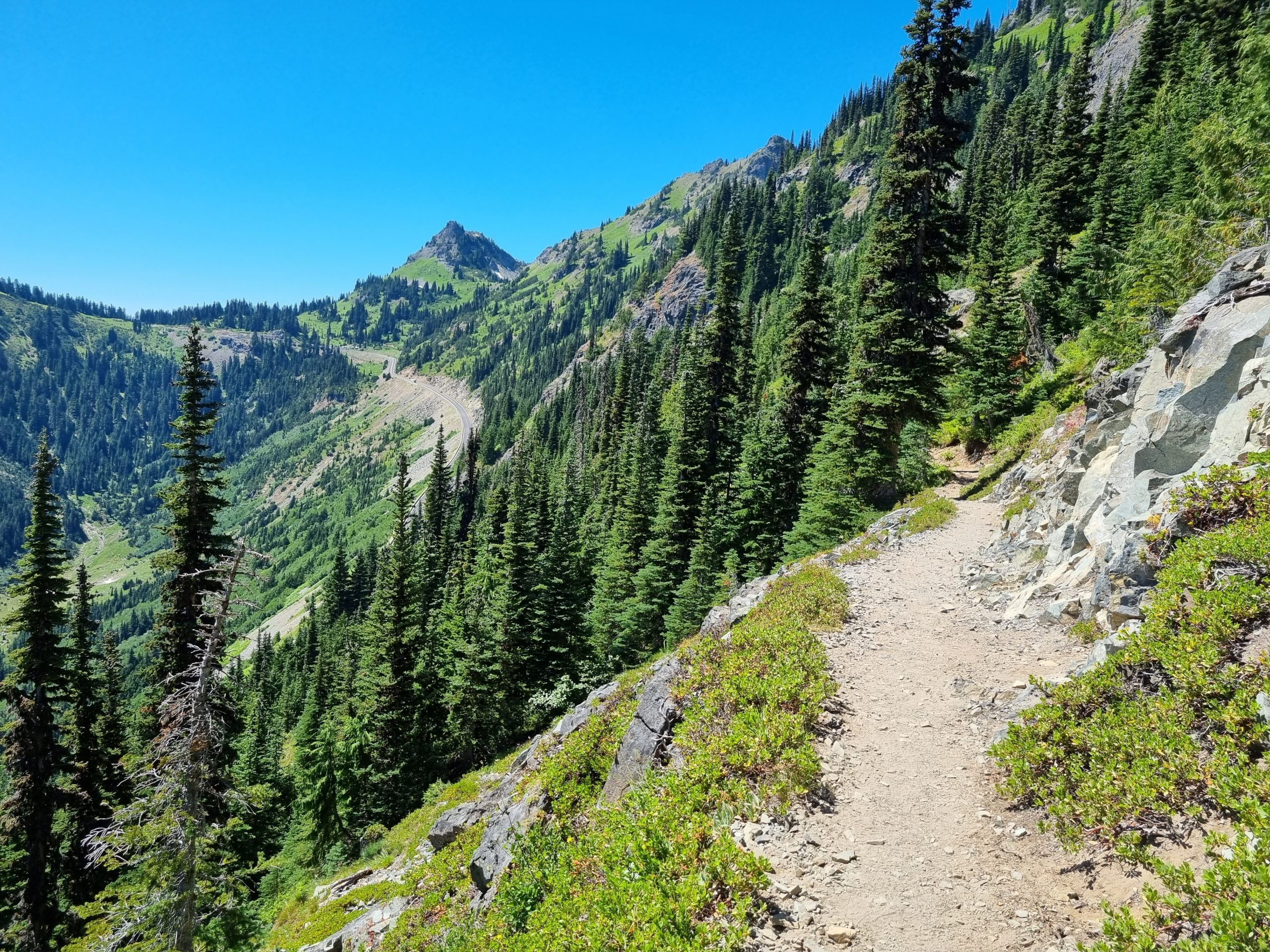 I woke up at night when my tent collapsed on me in the wind. Apparently Rebound’s tent had also collapsed and Crocs hammock straps had snapped and he had to sleep on the floor so there had been a lot of action at camp that night.

My ankles hurt, but I ignored it and continued hiking the incredibly beautiful trails, the view of Mt Rainier getting closer and closer. There were a lot of Rolling Stones and I kind of sprained my ankle. We got to Chinook Pass and had to throw out the trash. It was pretty hot and sunny and my ankle was starting to feel really sore from all the roots and rocks on the trail. We stopped at Sheep Lake and there were some aggressive birds that took a bite of my tortilla out of my hand. Croc’s toenail also suddenly just fell off. The birds scared Rebound as he has severe ornitophobia which causes him to see chickens everywhere when he panics. Doldphine number three thought that was really funny and laughed again at the rebound phobia.

I got to Dewey Lake later than the others and was the only one who went for a swim. Skratch bandaged my foot and I continued to limp. The trail was beautiful but a nightmare for a twisted ankle with lots of rocks and scrambling. This was one of the worst mosquito areas so far. The others agreed to camp earlier than planned because of my leg. Croc and Rebound even waited for me on the trail to check if I was still moving.

I got to the campsite around half past six and set up my tent next to the others. I drank my emergency whiskey and decided to take a nap in the morning to give my feet more time to heal. 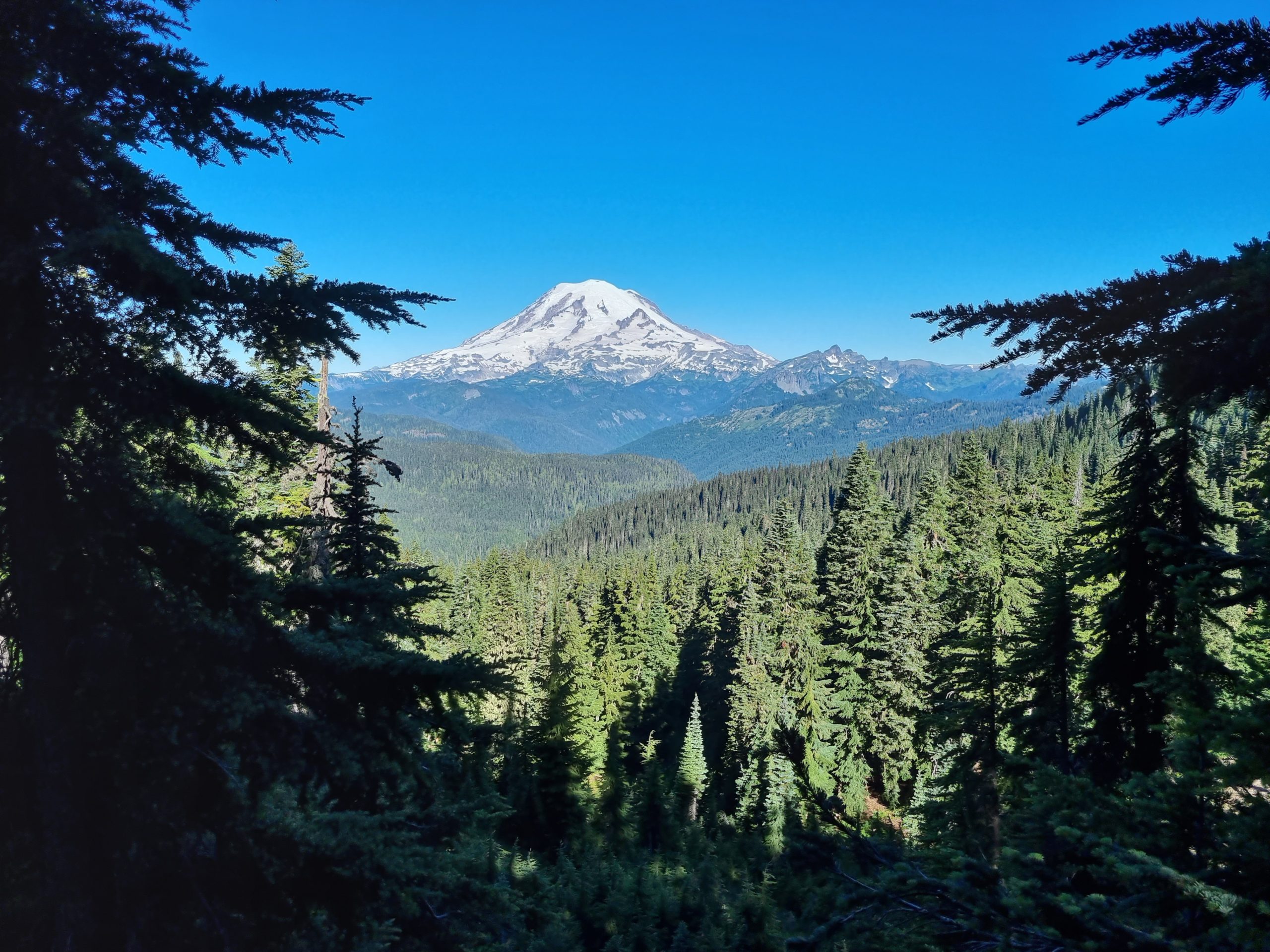 We had a “sleep in” morning, which in practice meant waking up at 7am. I didn’t want to hike as far as the rest of the gang because of my injured ankle.

The first half of the trail was perfect and all in all the trail itself was the easiest to walk so far – not counting the mosquitoes. I listened to an entertaining audio book about the Continental Divide Trail.

After a dip in Snow Lake, the mosquitoes got so bad that I couldn’t take breaks, even with my mosquito net, wind pants, rain jacket and bug spray on. They always managed to find a way to bite through a hole or through my clothes. I would say those mosquitoes were worse than in northern Sweden in July, which is pretty bad. Since there are no cabins in the PCT, there is no way to escape from the mozzies other than pitching the tent. I ate my dinner and at the same time walked around and hid in my tent at 7pm killing hundreds of mosquitoes that got into the tent just in the few seconds it took to throw my stuff and me into the tent. The rest of the gang had made it to the nearest supply point, White Pass, which was only three miles from my camp. I’ve kept my principle: always nero, never zero, that means having days when you only do a few trail miles, but no days when you don’t do any trail miles. 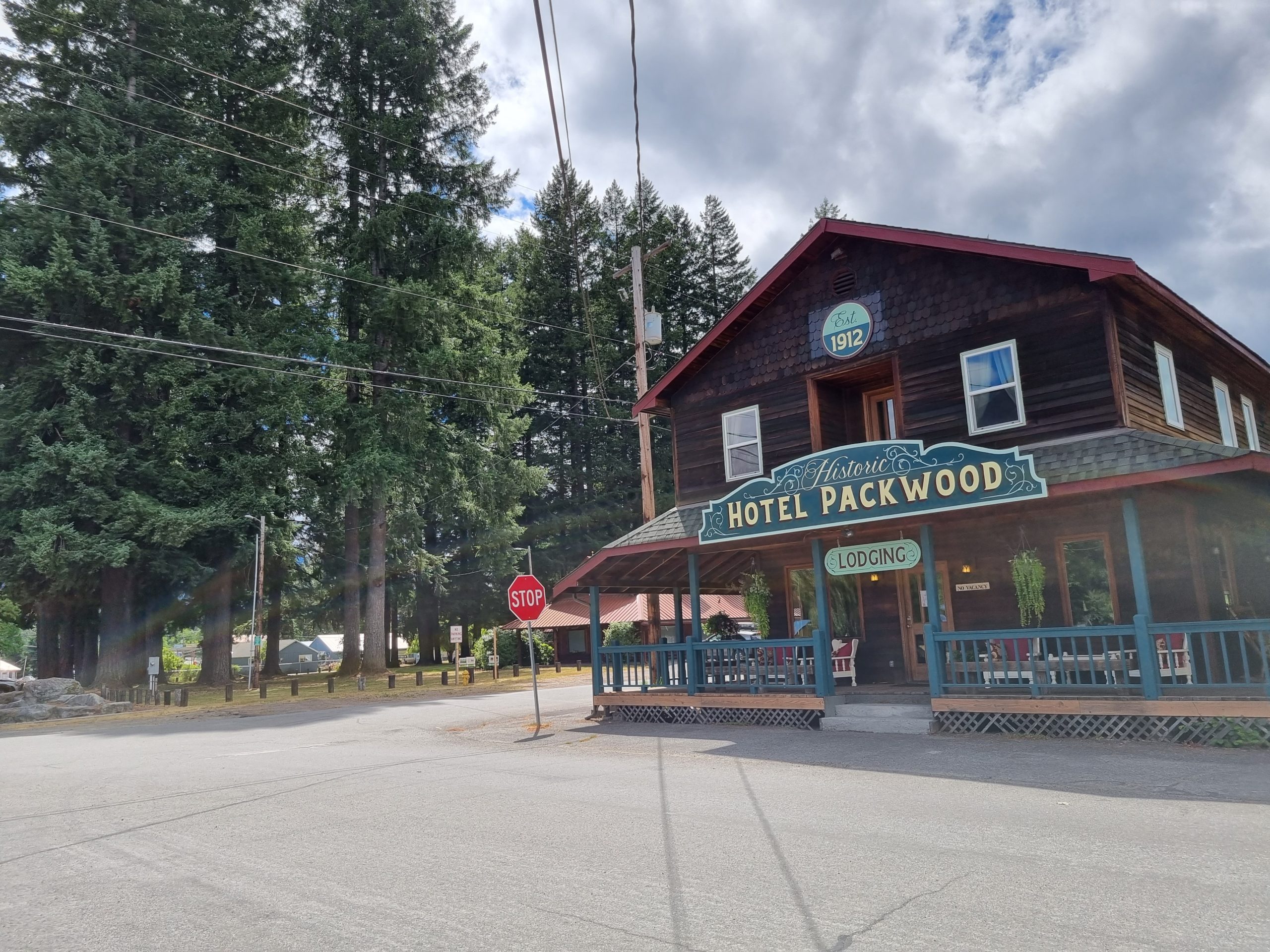 I walked an hour down to White Pass and of course the whole gang sat at the gas station where hikers can do their laundry and shower at overpriced prices. So did I, and then we headed to Packwood to get something to eat. Croc and Pocahontas already had a ride after 45 minutes of hitchhiking, but Dolphine nb 3 and Rebound gave up after just ten minutes of hopeless hitchhiking. Five minutes later, Skratch gave out too, so I hitchhiked by myself. Just five minutes later, a nice Mexican guy, Javier, stopped his truck and took me with him. As I was walking through the town of Packwood, I saw Croc walking down the street. He and Pocahontas were offered food, beer and lodging by a person who had received some hospitality in Britain at the time, and since Pocahontas is British they wanted to give him back the national good karma.

Unfortunately nobody had ever met a Finn or used any services, so after our visit to the brewery I went to a Mexican restaurant by myself. There was a sign saying that El Mariachi will come and play at the venue every Thursday from 4 to 5. I had no idea what day it was but I looked at my watch and it said it’s 10 to 4 and a Thursday. Ten minutes later, a fancy Mexican band comes in and gives a great concert. That really made my day.

On the way back to White Pass another truck stopped – and it was Javier again. I certainly earned some good Mexican Karma today.

This site contains affiliate links, which means The Trek may receive a percentage of any product or service that you purchase through the links in the articles or ads. The buyer pays the same price as usual and your purchase helps support The Trek’s ongoing goal of providing you with quality backpacking advice and information. Thank you for your support!

To learn more, please visit the About This Website page.