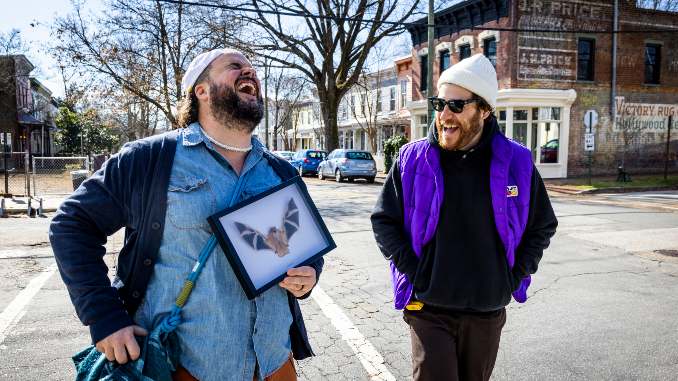 If you don’t secretly want to host a travel show, I don’t understand. Eating, drinking and getting to know new cultures at someone else’s expense? Sign me up.

In that regard, comedian and best friends Adam Pally (happy endings) and Jon Gabrus (Game over man!) live the dream. your new TruTV show, 101 places to party before you die (based on the book 101 places to get screwed before you die), follows the pair as they visit (and booze their way through) cities like Denver, Miami, Moab, and San Juan. Their adventures reach to the point of cutting off multiple times in Moab, to Gabrus breaking a rib skiing in Denver, to waking up hungover before filming on the Atlanta episode even started.

Luckily, Pally and Gabrus have been going through bars (and collecting) together for years. In a way, this is the job they’ve been preparing for since they first met at UCB in the mid-’00s.

“We were teamed together early after auditions and hit it off well because we were both in long-term committed relationships when we met in our early 20s,” Gabrus explains over a Zoom call. “And these two women hated improvisation or hated watching us improvise, so we connected, Oh yes my wife won’t be coming to the show but she wants to have dinnerand he’s like Mine too, let’s find out something.”

While her significant other wasn’t keen on improv, they came on board for the show (“Because it’s only on TV and it’s only 21 minutes long,” Gabrus jokes). They sometimes call their wives on camera or, in Adam’s case, his children as well, and ask them what kind of souvenirs they want, or other weekend chats.

“It’s the perfect participation. I don’t need my kids walking around thinking they’re the star of Thor. It’s the perfect amount for her to understand that dad’s job is on TV and he sometimes makes me crack silly jokes,” says Pally.

Besides the occasional phone call home, the typical episode of 101 places It goes something like this: The boys arrive in the new town on a Friday, spend the entire weekend sampling quirky restaurants and bars and enjoying local activities, and then have a debrief on Sunday night during their “last supper.” While some of the sites they visit are more standard, like the Edgar Allen Poe Museum in Richmond, others are more tailored to their own interests, like the International Church of Cannabis in Denver (Gabrus estimates that it accounts for about 85% of the was stoned Denver episode). Producers Michael Rucker and Justin Tyler were sure to find the sweet spot between places Gabrus and Pally knew they liked, those they probably would like, and those they would be uncomfortable with (see: Pally hiding in a corner of Richmond’s taxidermy). shop Rest in Pieces).

No matter what crosses their path, Pally and Gabrus seem up for anything when it comes to travel.

“I think in some ways we can both be best described as laid-back empaths,” explains Pally. “It’s a kind of vibe you want to travel with because travel is about expectations versus reality. And inevitably your expectations are shattered at one point or another and therefore the best person to be with is someone who is constantly walking, Hey, it’s not such a big dealor, We can do it like thator, Oh, that’s actually better. I feel like Jon and I do that naturally in our friendship.”

Gabrus adds that like real improvisers, they are “yes-men”.

“That attitude is very important, I think, to the spirit of the show,” he says.

Of course, not everything went smoothly. Pally was surprised by the level of anti-Semitism meted out to him during their travels.

“I think sometimes, especially for a gentile or an atheist like Jon, you don’t even realize it until you’ve been next to someone for eight weeks,” Pally shares.

“But anti-Semitism aside, what surprised me the most was how cheerful the street was at a time when it was quite stressful to be out and about,” he adds. “We were fortunate to be in a doldrums of COVID heights during filming, but it was still present and people were nervous. But when you went to a restaurant, it was great us, it was really healing for us because when we started filming Denver, we hadn’t done that yet. We haven’t been to restaurants or planes, so you rip the band-aid off, and what made it worth it was how beautiful and excited America was to be open.”

Gabrus and Pally’s joy is palpable on screen, with every bite and beer and bao bun. They dress for the occasion, all “peacock-like,” as Pally puts it, in their brightest Hawaiian shirts or hats, or a particularly memorable Pally sweater he calls “Roseanne’s couch.” They must have made an interesting pair alongside their crew (“a bloody absolute elite SEAL team,” gushes Gabrus), who tended to dress mostly in black.

“Our sound engineer only has black jeans, and sometimes you would say We are in the water‘ Pally recalls.

“Yes, [Ryan] Firth wore black skinny jeans on every shot, and then when we were shooting on the beach in Hawaii, he just handcuffed them and pulled them up about an inch. I was like Okay, keep your cool out there, buddy. But these guys, these people work their ass off. And they care, too, which their job description doesn’t even require them to do. And it means so much to Adam and I how much they care,” adds Gabrus.

Like any good holiday, of course, is the first season of 101 places to party before you die will end, but Pally and Gabrus hope to have more adventures together in front of the camera soon. Wherever they go, there had better be a bar and a greasy hangover cure around the corner.


Clare Martin is a cemetery enthusiast and paste‘s Assistant Comedy Editor. Go and harass them on Twitter @theclaremartin.