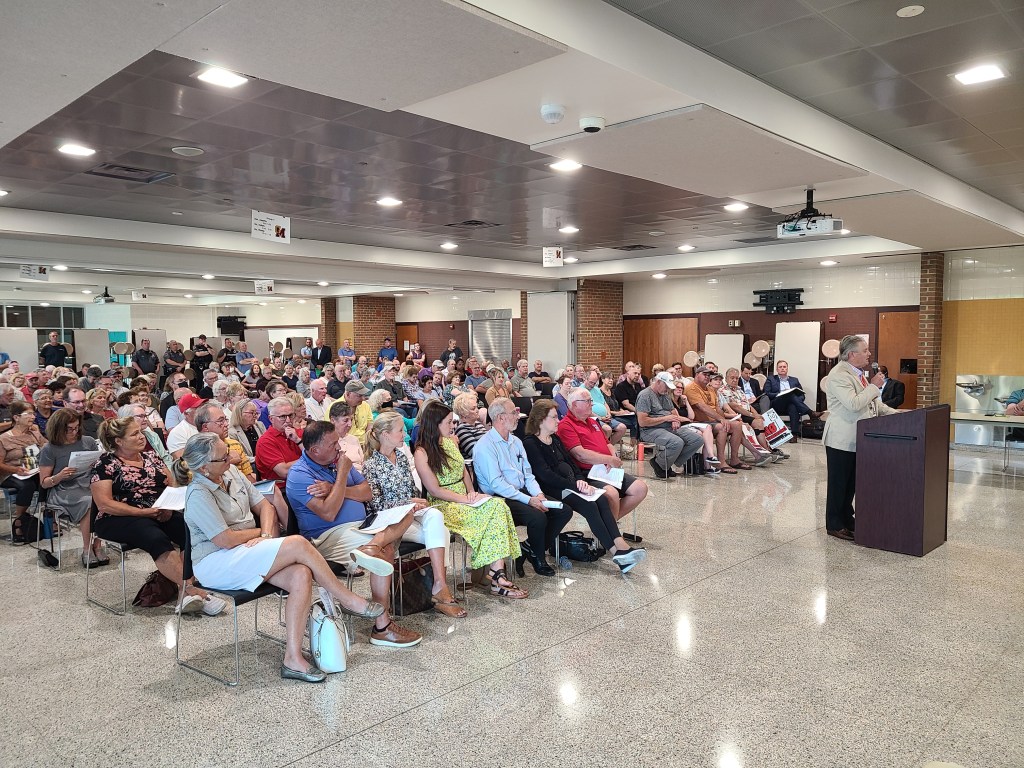 The Cumru Township Planning Commission postponed recommendations on plans for a 739,000-square-foot warehouse on a 171-acre lot at Freemansville Road and Route 10 after the project drew heavy criticism from local residents Monday.

Rumors of how the warehouse could disrupt traffic and cause accidents on dual carriageway Route 10 were raging among the hundreds of residents at the Gov. Mifflin Intermediate School where the Planning Commission meeting was moved to accommodate voter turnout.

In the cafeteria, about 20 people passionately opposed the warehouse in public comments.

“I believe this project is doomed before it even begins,” said Richard Keffer, former member of the Cumru planning committee, to applause and cheers from the more than 200 spectators.

Many of the speakers were members of a community group made up of people who lived near Flying Hills and other communities adjacent to the warehouse, whose members were identifiable by their bold red “No Warehouse” signs.

These signs have become a common sight at Cumru meetings since developer NorthPoint LLC, of ​​Riverside, Missouri, unveiled plans in May for the $80 million NorthPoint-Morgantown Commerce Center, a warehousing and distribution facility .

The planning commission should respond to the plans and possibly make a recommendation for approval or rejection to the community commissioners, who then vote on whether to accept the plans.

But after an intense public comment session, the planning commission declined to make a recommendation, instead announcing it would take more time to consider the project along with residents’ concerns and possibly revisit the issue at its September meeting to treat.

“There is no need to rush. I think we can just consider everything we heard tonight,” said community attorney Michael Setley.

During public comment, resident Rick Wolf claimed that the township officials’ decision to redesignate the warehouse property from rural conservation to an industrial site conflicted with the county’s land use plans, which had previously been approved by township commissioners.

The site was rezoned after being purchased in April 2018 by current owner Mail Shark, a mail marketing company on Route 625.

Mail Shark bought the property with plans to build its own distribution facility, but those plans were canceled amid the COVID pandemic.

Mail Shark still owns the property and has yet to complete the sale to Northpoint.

Wolf said the county planning commission reviewed Northpoint’s camp plans and concluded they would involve encroaching on land classified by the state as critical habitat for certain plants and animals.

Northpoint’s plans include requests for exceptions to community rules, which require studies that would examine the project’s impact on the local environment and its impact on the capabilities of the community’s emergency and medical services.

In response to requests to waive the environmental impact study, Hoffman said the camp site contains flood plains and streams, but they will not be affected by the project.

Regarding the waiver of an assessment of community facilities, Hoffman said it appears the proposed development is unlikely to have a significant impact on community services, including emergency services and educational institutions.

Hoffman’s comments on these waivers, which were read aloud at the meeting, were met with moans of disbelief and cries of “Are you kidding me?” From the crowd.

Several residents who spoke raised concerns about how adding truck traffic to Route 10 and nearby roads could limit the ability of fire or medical services, Flying Hills, and a nearby retirement community with a high concentration of elderly or ill residents to reach.

Jordan Kirlin, a former Southern Berks Regional EMS paramedic, worried traffic congestion could make it difficult for medical workers living in Flying Hills to reach their jobs and potentially put the patients who rely on them at risk.

According to Northpoint’s analysis, the planned camp would generate less traffic than the canceled Mail Shark facility — 1,034 new trips daily, including 163 truck trips — as opposed to 2,982 new trips from the Mail Shark plans.

For these reasons, Hoffman suggested that a new traffic impact study was not necessary.

“Not so with the Northpoint plan, which would involve a significant number of vehicles, some weighing up to 80,000 pounds,” Emery said. “Obviously, vehicles of this magnitude would have a much greater impact on safety, noise and air pollution, and road wear.”

Resident James Piraino, who said he has over 40 years of sales and warehousing experience and currently runs an industrial business, said the number of trucks the warehouse would add to Route 10 is a gross underestimate.

“There’s no way this facility can support less than 300 or 400 trucks a day,” Piraino said.

Piraino said the number of workers who would be at the warehouse each day — as indicated by developers’ estimates of car traffic to and from the site — appears to far exceed what would be required to handle 163 truck trips per day.

“What are these 200 to 300 employees supposed to do all day and only load and unload 163 trucks?” said Piraino. “It doesn’t add up. Truck traffic is way underestimated… to have that amount of trucks on this road is insane.”

The safety risks associated with adding large numbers of 18-wheel trucks in a steeply hilly, shoulderless section of Route 10 was a concern for nearly every local resident who spoke.

“I am telling you without a doubt that if this is approved there will be one death and that is up to you,” resident Pete Galvin told the Planning Commission, to a round of applause from the audience.

Some speakers echoed Galvin’s testimony, fearing that bad weather camp traffic could cause accidents or pose a hazard to pedestrians or school children.

Would Cumru be sued?

“We make every effort to comply with the law and undertake what we believe would be a good project,” Mooney said.

His comments were met with boos from the crowd.

Speaking of his current take on the plans, Gibson said, “It looks like the developer can meet the needs of the community, but I also feel like there’s a traffic issue here. I’m not sure it’s good planning if we have to deal with this traffic issue.”

Gibson noted that if Northpoint proves they can comply and the Planning Commission still rejects the plans, the community would likely be sued by developers.

“It’s going to go before a judge and we’re going to lose our capacity to stand trial,” Gibson said. “We’re trying to serve the best interests of the public here.”

Developers attended the meeting on Monday but did not address residents’ concerns.

A request for comment was acknowledged by developers, but comments were not returned Tuesday night.