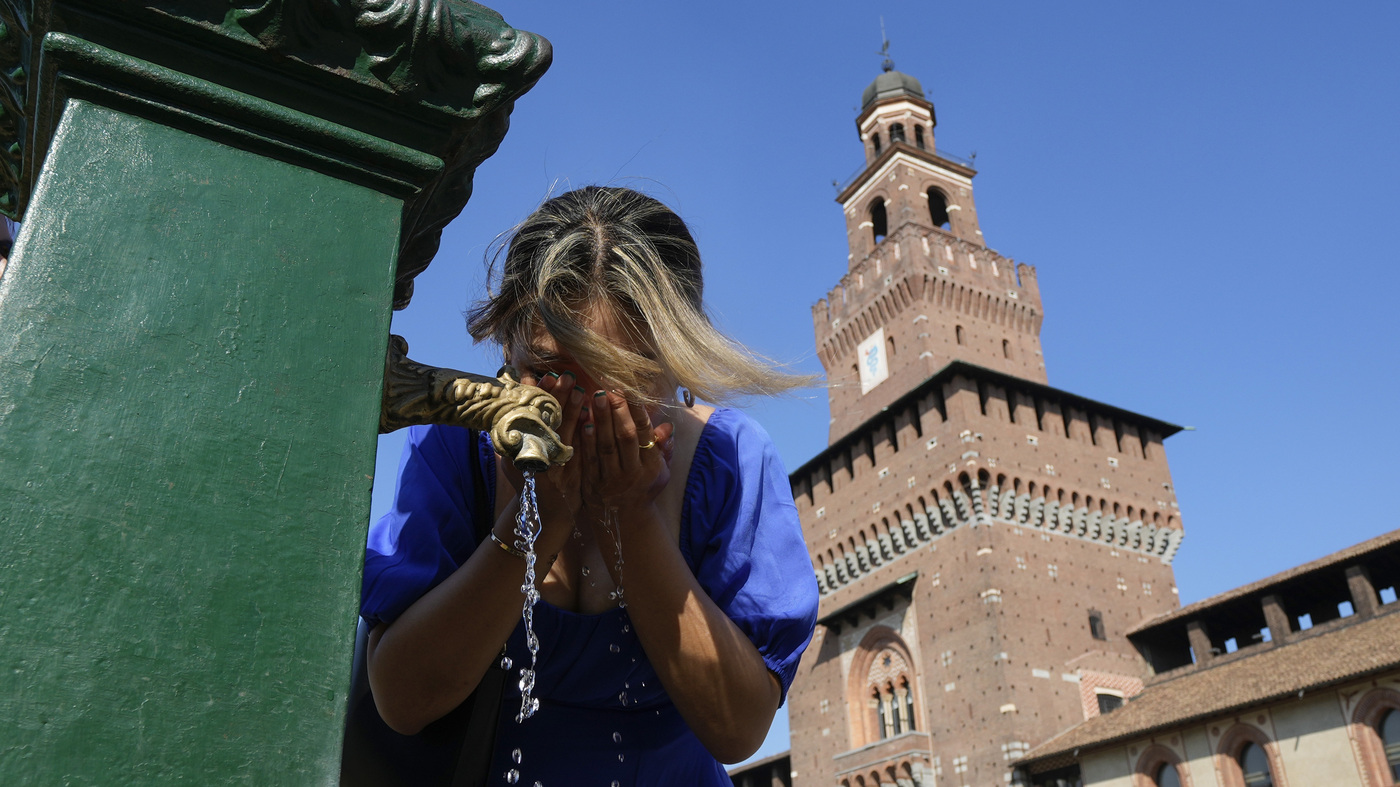 A woman cools off by a fountain at Sforza Castle in Milan, Italy, July 13. There’s a lot you can do to pay attention to those who are at higher risk of heat-related illnesses.

A woman cools off by a fountain at Sforza Castle in Milan, Italy, July 13. There’s a lot you can do to pay attention to those who are at higher risk of heat-related illnesses.

All summer in Tokyo, Ms Tsutsumi, a 73-year-old woman with a gray ponytail, has been worried she might get sick from the heat.

“It was so hot the other day,” she recalls, “I went to a shrine and prayed, ‘Please let’s survive this summer.'”

Like North America, Europe and other parts of Asia, Japan is struggling with a hot summer.

At the shrine, Tsutsumi bought an amulet that said “No Disease”. It now hangs in the entrance of her small, stuffy apartment on the second floor. The bathroom doesn’t have a bath or shower, so she can’t take a cold bath or shower to recover from the heat. (For reasons of hygiene, she uses wet wipes and regularly goes to a public bathhouse.)

And the building doesn’t have an elevator, so she has to be very careful when climbing the stairs. Her greatest fear is that a moment of weakness in the heat could cause her to fall.

Unfortunately, such incidents are not uncommon, says Glen Kenny, a professor of physiology at the University of Ottawa who studies how our bodies deal with heat.

As temperatures soar around the world, there’s more advice than ever on how to stay cool. But what if you’re also worried about protecting those around you?

While advice may vary depending on climate conditions and individual circumstances, rescue workers and researchers studying the effects of heat waves say there’s still a lot you can do to protect others.

Knowing which people in your life are more prone to heat stress can help you better support them when rising temperatures pose a threat to their health.

Who is particularly at risk?

people who are not used to the heat because they come from cooler regions or spend little time outdoors; infants, particularly newborns; people in their 60s and older; field workers with little control over their hours; People with certain health conditions or medications that limit the body’s ability to regulate temperature; and, for various reasons, people living in poverty (e.g. they are more likely to have chronic health problems or lack of air conditioning).

As more cities develop plans to deal with extreme heat, family members and neighbors can help each other develop their own individual plans.

This could start with making sure people get heat alerts in the most useful language, regardless of whether those alerts are linked to social media, weather reports or other sources of information. This planning could also include regular air conditioning checks to ensure they are working properly.

You can even map the cool and warm zones in someone’s home. Kenny advises helping vulnerable people limit use of the areas of their homes most exposed to the sun. Even putting blankets over the windows in the hottest rooms can help.

Having spray bottles on hand — for misting the skin — can help keep a person’s body temperature under control. And when you make sure prepared food is available, there’s no need to turn on the stove.

It can be awkward to act out disaster scenarios with an acquaintance, but it’s useful to stimulate conversations about heat stress, since not everyone is aware of the symptoms or risks.

When should you call an ambulance?

Health problems can begin with relatively mild cramps, as well as muscle cramps caused by strenuous activity in the heat.

Heatstroke is more common. It may include nausea, vomiting, cool or clammy skin, fainting or dizziness, and a fast but weak pulse.

These symptoms are exacerbated with heat stroke: the heart rate tends to increase, the skin becomes red, and fainting can cause confusion or loss of consciousness. You can also look out for a headache and a temperature above 103 F.

Beginning in June, Japan experienced temperatures topping 104°F coupled with high humidity as part of its worst heatwave on record.

“I can feel the difference because we’re seeing a lot more patients with heat stroke,” says Osamu Tadachi, a paramedic in the city of Koshigaya.

They received three times as many heat stroke calls as in previous years, without enough ambulances and staff to respond to everyone, he says.

Tadachi, who is also the secretary-general of the National Council of Japanese Firefighters and Ambulance Workers, says a person can have heatstroke even if the person isn’t sweating but is staggering or unresponsive. Dry lips are another worrying sign. He recommends calling an ambulance in such situations.

If someone has symptoms of heat exhaustion that are not yet at the level of a medical emergency, Clayton advises spraying the person with cold water, moving the person to an air-conditioned room, removing clothing, and giving water (try caffeine, soda to avoid). and other diuretics).

Clayton suggests waiting about 20 minutes to see if there is any improvement. If symptoms persist or devolve into heat exhaustion (e.g., disorientation), it’s time to call an ambulance.

While waiting, it’s especially important to keep your neck, armpits, and groin cool.

For people whose heat stroke is caused by exercise, getting them in cold water is crucial, says Kenny of the University of Ottawa.

Jun Kanda, an emergency room doctor and researcher at Teikyo University Hospital in Tokyo, emphasizes the importance of not only paying attention to high temperature but also dehydration. “People usually recover after drinking water,” says Kanda, who is a member of the Japanese Association for Acute Medicine’s Heatstroke and Hypothermia Oversight Committee. So if they’re unable to take in liquid, that’s a worrying sign that would warrant an emergency call.

Many heatstroke incidents happen out of sight—for example, in the overheated bedroom of an elderly person living alone. People over 65 are more likely to be locked indoors and struggle to pay energy bills, making it difficult to use cooling equipment even if they have them.

Overall, social isolation is a big killer during heat waves.

In Tadachi’s experience, it can take several missed calls or a stack of newspapers outside for neighbors to worry about a person living alone.

Some cities have tried to formalize check-ins before it’s too late. Because a high proportion of the people who died in British Columbia’s 2021 heat dome lived and died alone in low-income housing, the city of Vancouver has proposed funding a group of tenants to, among other things, conduct room checks in single-occupancy buildings to perform.

Another Canadian city, Saskatoon, is working with civil society groups to identify seniors who could benefit from heat controls. And in New York City, the Be a Buddy program connects volunteers with people facing health risks related to climate change.

While these programs are positive, not everyone will know about or opt for such services. Reaching older men living alone can be a particular challenge for many community programs like this one. This is where a personal connection can be a lifeline.

Wellness checks can be done either in person or over the phone, Kenny says. Even a phone call can help you determine if someone is disoriented — you can ask basic questions like “when is your birthday?” Finding out if windows are open and how often someone drinks water will also give you a sense of how it is could happen to the individual in the heat.

A home visit allows you to check whether the apartment is warm to the touch. Kenny says a temperature above 78 F generally poses a risk for the elderly and those with chronic health conditions; above 87 F would call for alternative arrangements.

Kenny recommends doing these checks one to three times a day in extreme heat. And it is best to come to the wellness check prepared with a spray bottle with cool water, cloths to moisten and put on, and drinking water.

Aside from pushing for stronger climate action, the most helpful thing any of us can do in the heat is also the simplest: check out others who may be at risk before a crisis point arises.

“There are lives that could have been saved,” says Kanda of the early summer heat wave in Japan this year. “We have to take care of each other.”

Reporting for this article was supported by the Social Science Research Council and the Japan Foundation Center for Global Partnership, through the Abe Fellowship for Journalists. This story was narrated with Chie Matsumoto.