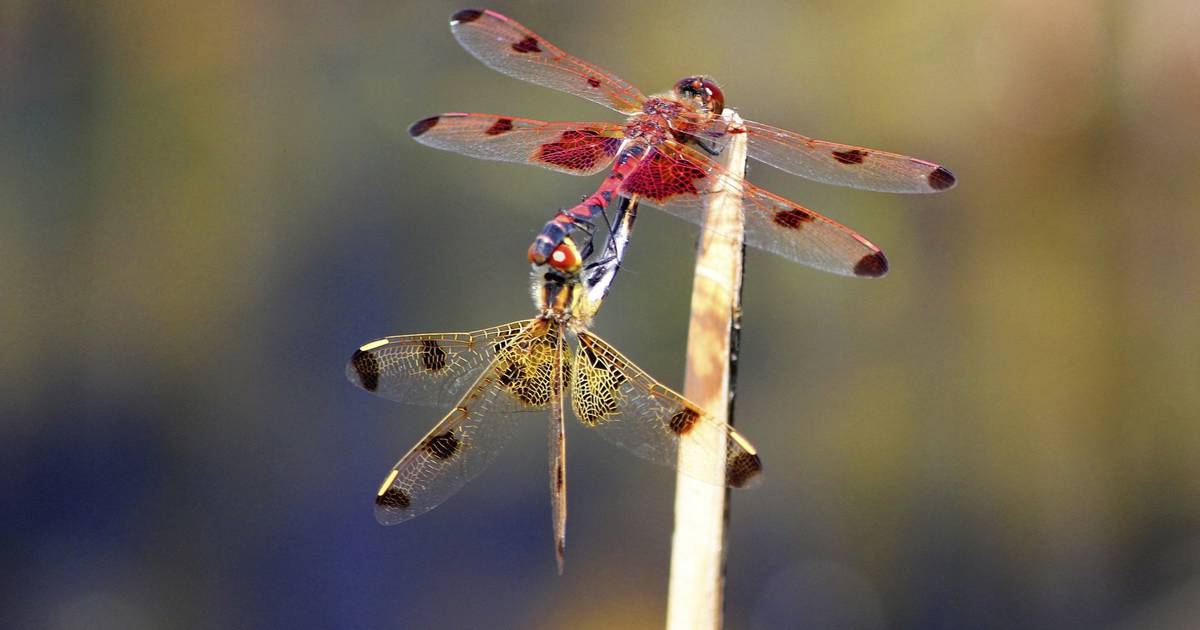 In the spring, I spend days marveling at the myriad colorful birds migrating through Illinois to their northern breeding grounds. Some stay here to nest, but numbers and varieties decrease sharply in summer.

I needed a natural fix in the summer. I found Odonate.

Odonate refers to dragonflies and dragonflies, flying insects whose ancestors lived on Earth 300 million years ago. That fact alone makes it worth observing these seemingly delicate creatures with two strong, long pairs of wings; a round head with large eyes; a chest and a long belly.

The first thing I learned about Odonate was that a dragonfly stretches out its wings while a dragonfly, a weaker flier, holds back its wings. The eyes of the spinsters are set further apart than those of the dragonflies.

For the most part, dragonflies are much larger than maidens. The largest dragonfly in the Chicago area, the common green darner is about 3 inches long and migratory. On the right spring or summer days, you can see tens to hundreds of them in the sky.

One of the smallest dragonflies, the eastern forktail, is less than an inch long. You won’t find them if they join the green Darner in the sky. They scurry through low vegetation.

The odonates that we see around various bodies of water are the adults that live only a few months. The adults eat insects, even other odonates, in between looking for a mate. The female lays eggs in moist vegetation. Both adults die.

Nymphs hatch from the eggs under water. The nymphs, which eat mosquito larvae and other microscopic treats, don’t hatch until the next spring, or even several years later. They crawl out of the water, climb a plant stalk and molt to become adults.

For example, male and female odonates don’t look alike, and the eastern forktail maiden has so many variations. Recently, I misidentified a female forktail as an azure dragonfly. The surveillance gurus pointed out my error and said this dragonfly was pruinose, meaning it appeared to be covered in a light, powdery substance. Azure Bluets or any other type of Bluet will never become pruinose.

Like some other plant and animal species, some odonates simply cannot be identified in the field.

Damselflies, the tiny tinkerbells that scurry around between plants, can be difficult to identify. In one year I spotted three known Bluet pairs on the waterfront in the wheel position, meaning they were copulating.

Monitors record our observations in an online database. The information can become meaningful after a few years.

A few years ago I documented 93 individuals of at least nine species, including 39 eastern amberwings, at a pond I monitored in Mundelein.

That year I had only 20 individuals of four species and only five amberwings at about the same time.

Lake County news updates are delivered every Monday and Wednesday

I noticed some kind of unusual substance in the water that may have been dumped there this year. Maybe that’s what led to the descent. But there are also droughts and torrential downpours that can impact donation numbers. A friend of mine who monitors Odonate has documented the rise and fall and rise again of a particularly beautiful species called ebony jewellery.

Went to Mundelein Pond this week and saw many more odonates than this season including 40 amberwings, plus dozens of eastern forktails and known bluets, whitetails, dodecapod skimmers and baskettails. I couldn’t count them all.

Overall, however, scientists assume that the number of odonates is declining.

To broaden my horizons and knowledge, I began monitoring Lake Defiance at Moraine Hills State Park. There I discovered Halloween pennants. This species gets its name from the orange wings with dark brown bands. They often perch atop vegetation in plain view like cattails in swamps and fields.

I counted 22 Halloween pennants one day while monitoring this year. I also photographed two calico pennant dragonflies in the wheel position and observed a twelve-spotted raptor female laying eggs in the wetland vegetation. As a kid I thought dragonflies were cool, but I didn’t realize there were so many species and their interesting life cycle.

Here’s a simple challenge: Walk past a pond or wetland on a warm, clear, fairly calm summer day and see what’s flying around out there. You will be amazed.

Sheryl DeVore has worked as a full-time and freelance reporter, editor, and photographer for the Chicago Tribune and its affiliates. She is the author of several books on nature and the environment. Send story ideas and thoughts to sheryldevorewriter@gmail.com