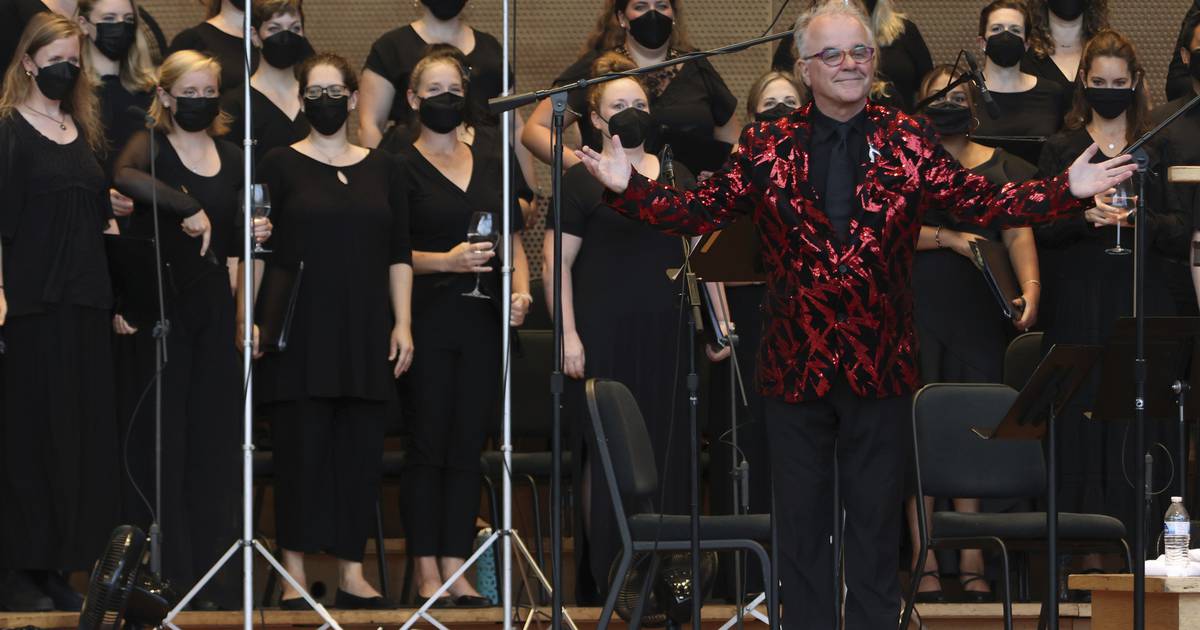 Talk about lighting your birthday candles.

Each year, Chicagoland’s finest classical singers headline the Grant Park Music Festival for a chorus-forward program, conducted by Christopher Bell. But this year, as they say, is a big year. Thursday’s performance celebrated the 60th anniversary season of the Grant Park Chorus and featured the ensemble in a rare concert without orchestra and themed around the motif of light.

Not that this party theme severely limits Grant Park’s options. The festival easily filled an hour-long program of mostly contemporary cornerstones, ranging from the sacred to the secular and everything in between, featuring keyboardist Stephen Alltop and musicians from the festival orchestra.

Morten Lauridsen’s “Lux aeterna” (1997) asserted itself as the only multi-movement work on the programme, which literally fitted the idea of ​​the programme: after the death of his mother, Lauridsen collected sacred Latin texts dealing with light and, in a way, arranged them in a row Neo fair.

Much of the movement borrows from retrograde choral conventions of past centuries and remains in the same key for most of the piece. That hasn’t stopped “Lux aeterna” from being one of Lauridsen’s most programmed works – whether it should be is another debate altogether.

The chorus, masked and in its reduction A cappella Cast of 60 singers, convincingly argued for “Lux aeterna”. Tenors sang with outstanding control and warmth in their “Agnus Dei” solos, and sopranos featured an impressive blend of inner parts. But it was Bell’s convincing interpretative arc that distinguished this “Lux aeterna”. Always an eye-catcher in a dazzling red blazer, Bell led the ‘Introitus’ so that it bubbled from emotional reticence to unabashed passion, highlighting the work’s own progression from medieval modal declamations to big-boned neo-Romantic harmony. Bell also managed final consonants here and throughout the night with a deft hand, some glowing like the still smoldering end of a candle wick.

Choral superstar Eric Whitacre’s “Lux aurumque” (2000) hit the spot in Grant Park’s poll – lush, universally appealing and no doubt familiar to many singers in the audience. Lux aurumque opened Whitacre’s then-novel virtual choral series in 2010, when the idea of ​​inserting pre-recorded voices into a distant ensemble seemed like something out of The Jetsons. (How little we knew.) Of all the works on the program, the Grant Park Chorus parts seemed to fit most effortlessly into Whitacre’s compositions, half-steps that tingled satisfactorily within sections.

Abbie Betini’s riveting ‘To the Evening Star’ (2013) was also full of delicious dissonance, with festival orchestra flutist Mary Stolper being a particular standout. In Betinis’ seven-minute work, the flute is less an accompaniment than an equal narrative partner for the choir. Stolper’s solos, cadential and flaming, unequivocally underlined this intention.

The evening ended with a sweet farewell to Samuel Barber’s “Sure on This Shining Night,” as the singers soared above Alltop’s steady piano pulse. Bell told the audience that he chose Barber’s Classic because he thought it was completed in the same year as the founding of the Grant Park Chorus. It turned out he had a year off – but Bell joked that he was willing to extend the chronology when everyone else was.

“Sixty years strong – here’s to another 60 more,” he told the crowd.

Indeed – and the future looks bright as ever.

The Grant Park Chorus repeats the program a cappella for its “Night Out in the Parks” series on August 8 at 6:30 p.m. at the South Shore Cultural Center, 7059 S. South Shore Drive, free; Grantparkmusicfestival.com

Hannah Edgar is a freelance writer.