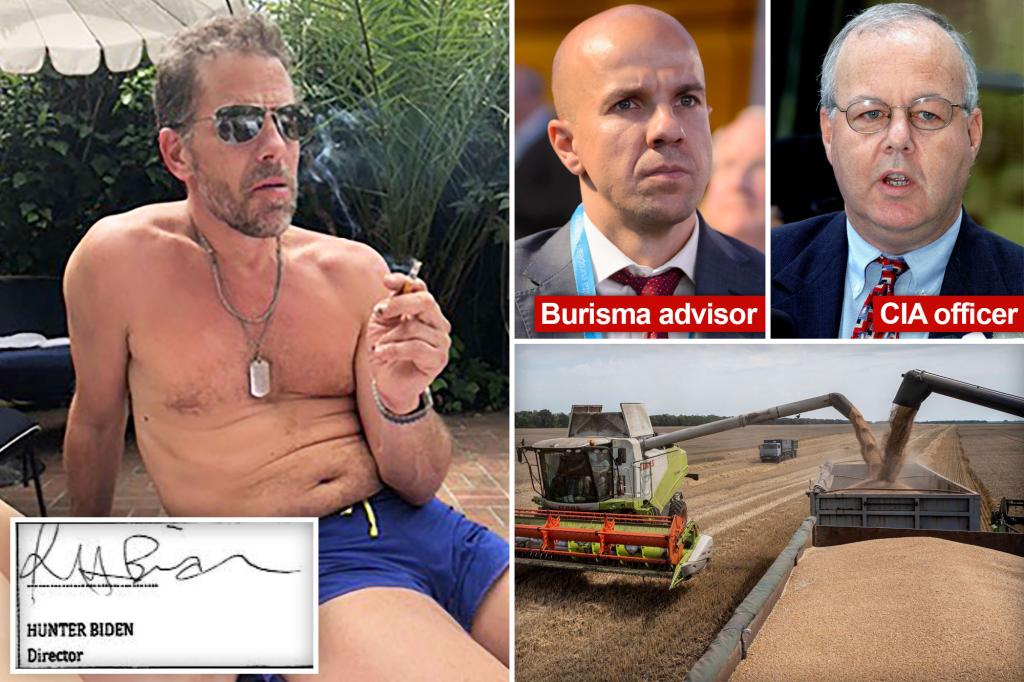 Hunter Biden was involved in a Burisma Holdings project to export grain from Ukraine to China in 2018, a document found on his abandoned laptop shows.

The scandal-stricken first son’s signature was among those of a July 27, 2018 Burisma board resolution affecting the Sino Ukraine Silk Road Grain Port project.

In addition to Hunter, seven other members of Burisma’s board of directors authorized their advisor, Vadym Pozharskyi, “to represent to all Chinese prospective shareholders for development, negotiation and contractual matters, as well as operational management of the ‘Sino Ukraine Silk Road Grain Port’ project.”

Former CIA officer Joseph Cofer Black, a Burisma board member, was also among those who signed the project, the document shows.

There is no further mention of the project on Hunter’s laptop – and it was not immediately clear if the grain was ever shipped.

The revelation of Hunter’s ties to the company came a month after his father’s government accused China of stockpiling wheat amid a global food crisis fueled by Russia’s invasion of Ukraine.

President Biden had predicted in March that the war would upend world wheat supplies, as Russia and Ukraine together account for about a quarter of world wheat exports.

Hunter resigned from Burisma’s board of directors in April 2019 — the same month he left his laptop at the Delaware repair shop — because he said he didn’t want to distract from his father’s presidential bid.

The Post’s investigation of the infamous laptop has since uncovered how Hunter’s countless overseas deals unfolded when his father was Barack Obama’s vice president.

The deals, which President Biden has repeatedly denied any knowledge of, are almost certainly part of the ongoing Justice Department investigation into Hunter, which has reportedly reached a “critical stage.”

Pozharskyi, the adviser referenced in the China-Ukraine grain project, is the same employee who emailed Hunter thanking him for introducing him to then-Vice President Biden in Washington in April 2015.

Additional documents discovered on the laptop show Pozharskyi had been invited to a dinner arranged by Hunter for Biden to meet his foreign business partners from Ukraine, Russia and Kazakhstan.

The Biden administration “categorically denied” that the meeting between Biden and Pozharskyi took place at the chic Café Milano after The Post first reported on the email in October 2020. However, the story changed in June 2021 when The Post released the dinner guest list.

“Dad will be there, but keep that to ourselves for now. Thanks,” Hunter emailed a guest three weeks before dinner.

A “White House person with knowledge of Joe Biden’s appointments” later told Washington Post fact-checker Glenn Kessler that Biden went to Cafe Milano that evening but “only stopped by to catch up with one of the guests.” meet” and “there was no discussion about politics or economics.”

According to documents on the laptop, President Biden met with at least a dozen of Hunter’s business associates – including in China when he flew to Beijing with his son on Air Force Two in 2013.

The purpose of Biden’s trip was an official visit by the vice president to newly appointed President Xi Jinping.

Biden has been accused of becoming lenient on China amid his son’s ongoing scandals and, more recently, ahead of House Speaker Nancy Pelosis’ visit to Taiwan this week.

The president last month urged Pelosi to cancel the trip, insisting that “the military doesn’t think it’s a good idea at this time.”