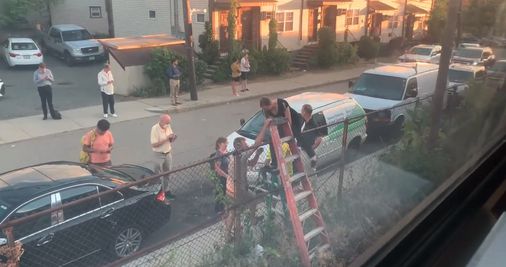 “Pretty soon after that the conductor came down and said the locomotive stopped, we have no idea why and we’ll update you,” Branagan said in a phone interview Tuesday. “So we wait for a vehicle to push us.”

As time went on, people got more and more frustrated. Some checked their phones to see if they could get more information from the MBTA via social media. The lights were off in the cars and the air conditioning wasn’t working, he said.

“There was no airflow,” Branagan said. “The train was completely dead.”

After about an hour of waiting, Branagan saw one of his fellow passengers outside the train.

“We see a woman who clearly comes off the train, she puts her bag on the other side of the fence and she climbs over,” he said. “Then the whole train gets up and we just watch. Suddenly you see another person from the train [doing the same thing]… then you see a flood of people coming down in the middle of the wagons, who want to find a door from which everyone came out.”

Branagan chose to stay on the train. He watched as a man on the other side of the fence pulled a ladder from a van and began helping drivers climb over the fence.

“The street filled up with Ubers and people being picked up,” he said. “It was crazy. I didn’t get out.”

Pesaturo, the MBTA spokesman, said the 595 train was eventually ferried back to Boston Landing, arriving there around 7:50 p.m., and passengers could transfer to the 531 train to continue service to Worcester.

Pesaturo said it was “very unusual” for a full train to experience a power outage for so long.

The MBTA and Keolis “strongly discourage people from entering active railroads,” he told the Globe in an email on Tuesday.

“Based on the location where train 595 was stopped, it has been determined that it is safest for passengers to remain on board,” Pesaturo said. “Although some passengers were told by Keolis train staff not to exit the train, they chose to use the emergency door handles and exit the train. MBTA and Keolis understand that passengers were frustrated when the train was stopped without power to activate air conditioning or announcements, but the safest alternative in such a situation is to let passengers board. (FYI: People didn’t go through ’emergency exits’. They used emergency door handles to open the doors and exit the train).”

Train 595 normally carries an average of 750 customers. Pesaturo did not specify how many passengers were on board the train Monday night.

“MBTA and Keolis apologize to customers for the prolonged delay and the uncomfortable conditions on board the train,” he said.

Stephen Linn was on his way home to Newton from his job at a downtown law firm on Monday night when the train stalled, he said.

At first the conductors said it was a mechanical problem and that another train would be arriving to push the disabled train to the next station, Linn recalled.

But as an hour passed, the 43-year-old began to worry.

“I’ve had delays before. This one was different because they kept promising that a train would come that would push us and then it never came,” he said.

“There was never a time estimate. That was probably the most frustrating part.”

With no electricity, the heat on the train was suffocating. Linn eventually made his way to the rear of the train, which some of the passengers in his car said was cooler and where a door had been held open to let in fresh air.

As he sat there, people started talking about getting off the train themselves, he said. “People made jokes about us jumping off – and then people did.”

Linn himself got out after about 20 people had already climbed onto the tracks. He followed other passengers who climbed a fence nearby – “It was harder than I thought. I kind of got stuck upstairs,” he said — and called an Uber. He wasn’t the only one either: “So many people got into the wrong ones.”

While he waited, workers brought in ladders to help more passengers get off the tracks, he said. Linn got home around 7:45 p.m. – almost two hours later than a normal commute. “I feel like I have my Boston card now when I’m crawling out of a broken train,” he said. But the T should have communicated more clearly what was going on, he added. “If they just gave us a timetable, maybe that would have kept people on the train if we had known what was going to happen,” he said.

Scott Garfield, 56, also rode the 595 train home from work. After about a dozen people got off the train, he decided to do the same. He ended up jumping the fence and calling his family for a ride.

“It was a bit surreal, I have to say,” Garfield said in a phone interview Tuesday. “I called my family in Wellesley and my daughter picked me up.”

“Perhaps most frustratingly, there were no announcements,” Garfield said. “If you sit there and an hour goes by with no information, you start to get restless.”

Garfield said he hopes there will be additional training and protocols in the future to handle these types of emergency situations. There needs to be more communication with passengers, he said.

As for Branagan, who describes himself as a “huge supporter of public transport,” he hopes it never happens again.

“A lot of people talked about not taking the train anymore,” he said. “I wish the T could pull itself together.”

Steve Anear from Globe staff contributed to this report.