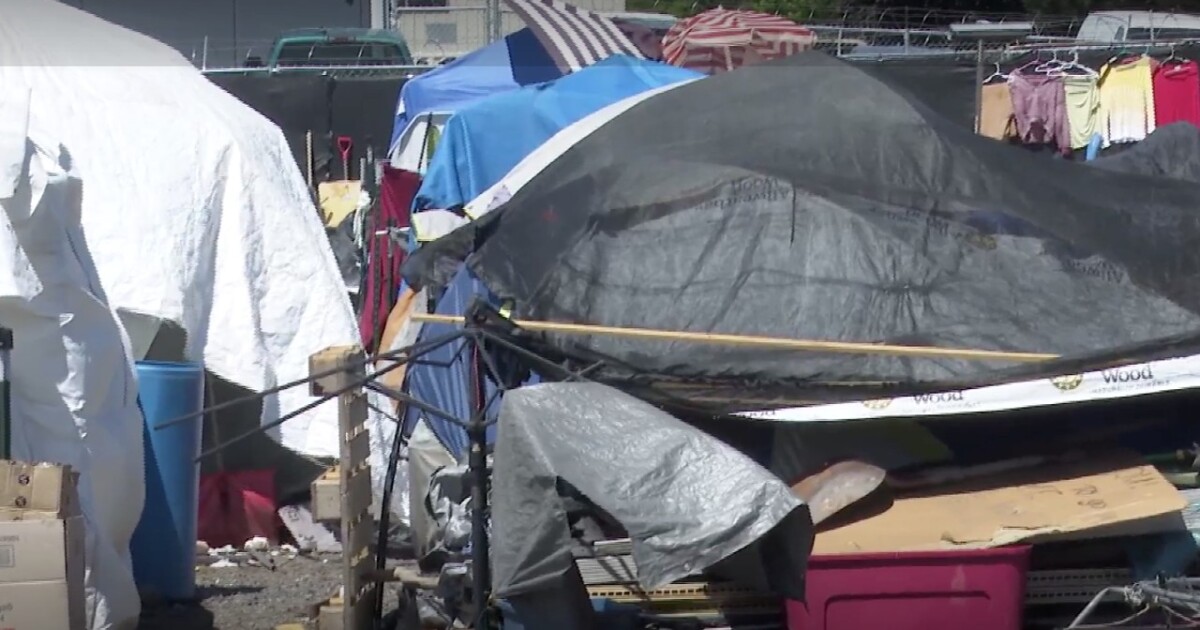 MISSOULA — Homeless residents and advocates say they are concerned about conditions, changing rules and the summer heat at the Authorized Campground (ACS).

The ACS – which is located on Clark Fork Lane in Missoula – has been operational since January. It originally opened as an accessible campground aimed at accommodating people under the Reserve Street Bridge. But city officials and campers alike say there have been problems keeping the site clean.

MTN News found the site was experiencing complications with contractors and staff turnover. Limited water, shade, trash removal, and bathroom cleaning are what homeless community members and advocates are citing as the result.

“Trying to stay hydrated and cool, very hard. shade is limited. It’s not easy to stay cool, especially in this heat,” said Sean Wilde, who has stayed at the site since January. “We expected to have a clean place and environment.”

“There’s water in that one tent that’s over here, and there’s water stored in the trailer that security is in,” Wilde said during a tour outside the fence. He also notes that Culligan’s water jugs often run out before the next delivery.

Wilde — who is also secretary of the Hope Health Alliance, a nonprofit advocacy group in Missoula — noted that some people have generators and fans, while others cool off in the river or douse themselves with water.

County officials say water is being delivered regularly, but they are working to understand the complaints and how much additional water may need to be brought on site.

“It makes it difficult to get to where people want to pack up and just want to go somewhere else, but there’s really nowhere else to go,” Wilde said.

The nonprofit speaks out on behalf of other camp residents who feel they have no voice. “You feel like there’s no one you can talk to about it, and that’s not okay either,” said Wil Harvey, who serves as peer recovery advocate and community ambassador coordinator.

Emily Armstrong, manager of the City of Missoula’s homelessness program, explained that water, garbage collection and bathroom cleaning are handled through county contracts with outside agencies. Some of these contractors are struggling with staffing issues.

“It’s something that we’ve struggled with over the life of the ACS, these contractors come in regularly,” Armstrong said. “But that was a challenge, regularly picking up and cleaning up those basic needs. We’re trying, that’s something we’re working on regularly, weekly, daily and trying to fix problems when those services fall through.”

“Where we wash our hands after using the bathroom, which is filled with water and only fills when they come out and empty the porta potties, which is once or twice a week,” Wilde said. “And that’s not enough for over 40 campsites.”

There is room for four people per campsite, so a total of more than 100 people in the camp.

“We work regularly and very actively on these issues. But some of that is just out of our hands, on the part of the contractor,” Armstrong said. “It’s part of the contract if a pickup or cleaning is missed, we kind of have to fix errors on our end until the next one comes along.”

Armstrong also said there hasn’t been a campground manager since June. “There are many people who have done this and filled the gap in staffing needs, but we didn’t have staff whose only job it was and that was a challenge.”

Three new city employees have been hired and will start in August.

“The ACS is a very challenging project for local government. We’ve never done it before and we’re always learning. We provide water on site. The county administers the water contract. There’s Culligan, and there’s bottled water too. There are toilets and a garbage disposal service. The site simply provides a relatively safe place to pitch tents with security and has a low barrier to entry and service,” City of Missoula communications manager Ginny Merriam wrote in an email to MTN News.

Wilde says camp residents have also had issues with rule changes, particularly about what types of housing are allowed. “Canopies, all the carports for shade, they’re telling people to take them down,” he said, adding that campers expect to hear more on the subject on August 10.

Advocates like Harvey say they want people to know it’s okay to speak out, “it’s okay to stand up for your basic human rights and there are people out there trying to help.”

Armstrong said officials will continue to try to work to resolve the issues.