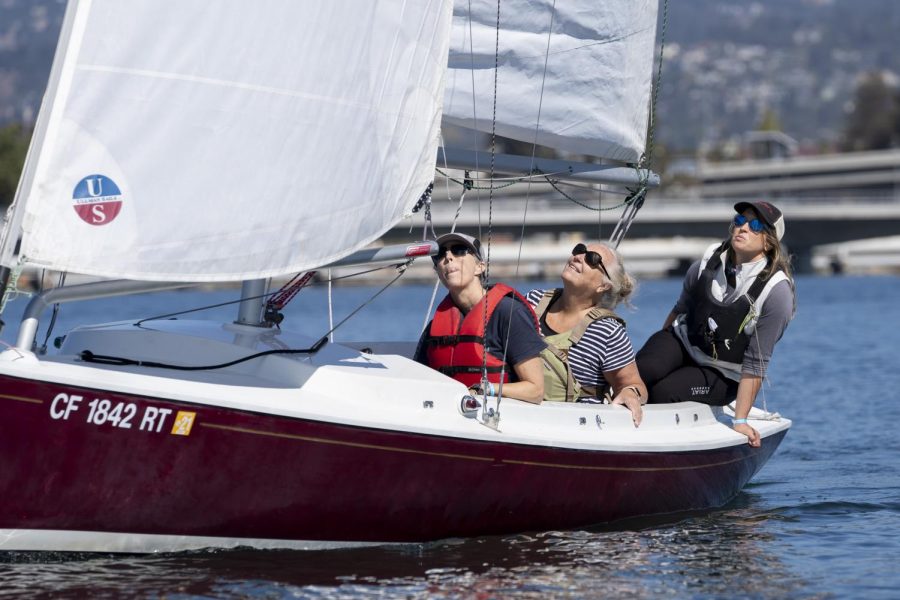 Over 30 years ago, after attending a women’s sailing workshop in Orange County, Linda Newland and Mary Quigley thought, “We need a workshop where women can learn about sailing from other women!” They decided to start their own sailing seminar at the Island Yacht Club in Alameda.

In 1992, a women’s sailing seminar was unknown in the Bay Area. When women wanted to learn to sail, they learned from men. “Women’s sailing was unheard of, and Newland pushed that line,” said Melissa Grudin, club commodore and host of the Northern California Women’s Sailing Seminar. She said this seminar has been a safe place for women to learn to sail for 29 years. Last year the seminar took place virtually due to the pandemic. This year it was a hybrid event, requiring all physical participants to provide proof of vaccination.

Grudin said everyone has a different language, so it’s important to attend seminars like this: taught by women for women. “A lot of women get on boats with their husbands, their significant other, whoever … and all they get is ‘do this, do that,’ but they don’t know why and women like to know,” she said. Grudin also said if you take the time to explain something to women, they will do it, and if you show them in a way that they understand, they will want to do it again.

The IYC is now a paper club, which means it no longer has a clubhouse but communicates with its members online. Club members enjoy mutual privileges with other yacht clubs in the San Francisco Bay Area, allowing them to use their club facilities. Still, without a clubhouse, the IYC has held more meetings and events in the past year than most other yacht clubs in the area.

Over the weekend, the club held its 29th Women’s Sailing Seminar with the help of the Encinal and Oakland Yacht Clubs, who made their boathouses available for the three-day seminar.

Newland kicked off the first day of the seminar with a hybrid in-person and virtual presentation about her 50 years on the water. She shared her experience sailing the Oakland Estuary with little to no experience in the 1970s. She then shared stories of her single-handed sailboat adventures from San Francisco to Japan and from Hawaii to San Francisco. Today she is still sailing on her new boat, a Grand Banks 36 called Tsusiat, which she hopes to take to Hawaii next summer.

“Most of these [instructors] have been on the water for a long time, some for over 50 years,” said Grudin. She added that some of them have come a long way from galley maids to captains. “You’ve seen a lot of stuff. They were being hustled around on boats and they were really uncomfortable, but they persevered and they ended up making a name for themselves and breaking records.”

Grudin sees herself as a cruiser, but adds that sailing sailboat races require that “go-for-it” attitude, one that doesn’t take no for an answer.

“I like living at the limit,” said Dawn Chasney, an avid racer and volunteer instructor at this year’s seminar. Chasney got into sailing in her mid-30s when her $10 raffle tickets bought her a trip to the British Virgin Islands with some sailing friends. For this reason, she emphasizes to people she meets never to “assume you know where the opportunities are coming from.”

Chesney knows the dangers of the race, not only because of the environment but also because of the close contact of some boats. Still, she believes that “when you’re hardcore, you’re as close as you can get”.

On Saturday, students were separated from beginner to advanced tracks. “When beginners come to our course, we treat it like, ‘This is a boat 101, this is the bow and this is the stern,'” Grudin said, pointing to the front and back of the boat. While beginners began with the basic anatomy of a sailboat, advanced learners learned about boat maintenance and regattas. On Sunday, the seminar held a race to summarize everything the students had learned in a final session.

“There’s just something magical happening when you’re on the water,” Grudin said. She added that many of the older women are dropping out of the program, but there are also many young women who are just starting out. She urged all young women who might even be interested in sailing to get involved before they get scared and while they still have “everything”. [their] senses and mind over [them].”

Grudin admits going virtual hasn’t been easy after losing their 50-year clubhouse. But her club was determined to continue the tradition of women teaching women to sail. Despite the difficult transition of becoming a paper club, with the help of an onslaught of determined volunteers, they have continued to hold well-attended events and races.

Grudin knew that holding the seminar this year amid the pandemic came with lower turnout than usual. Knowing this, Grudin said, “Are we crazy to do this? We probably will. are we stubborn Well, we are seafarers. And are we flexible? You should be damn better than that to let something like that happen.” She hopes to one day have a clubhouse again where all members can gather and a place where the club can organize its own events. But in the meantime she was grateful that the other clubs “were gracious and so great in helping [them] to survive [the] Pandemic.”