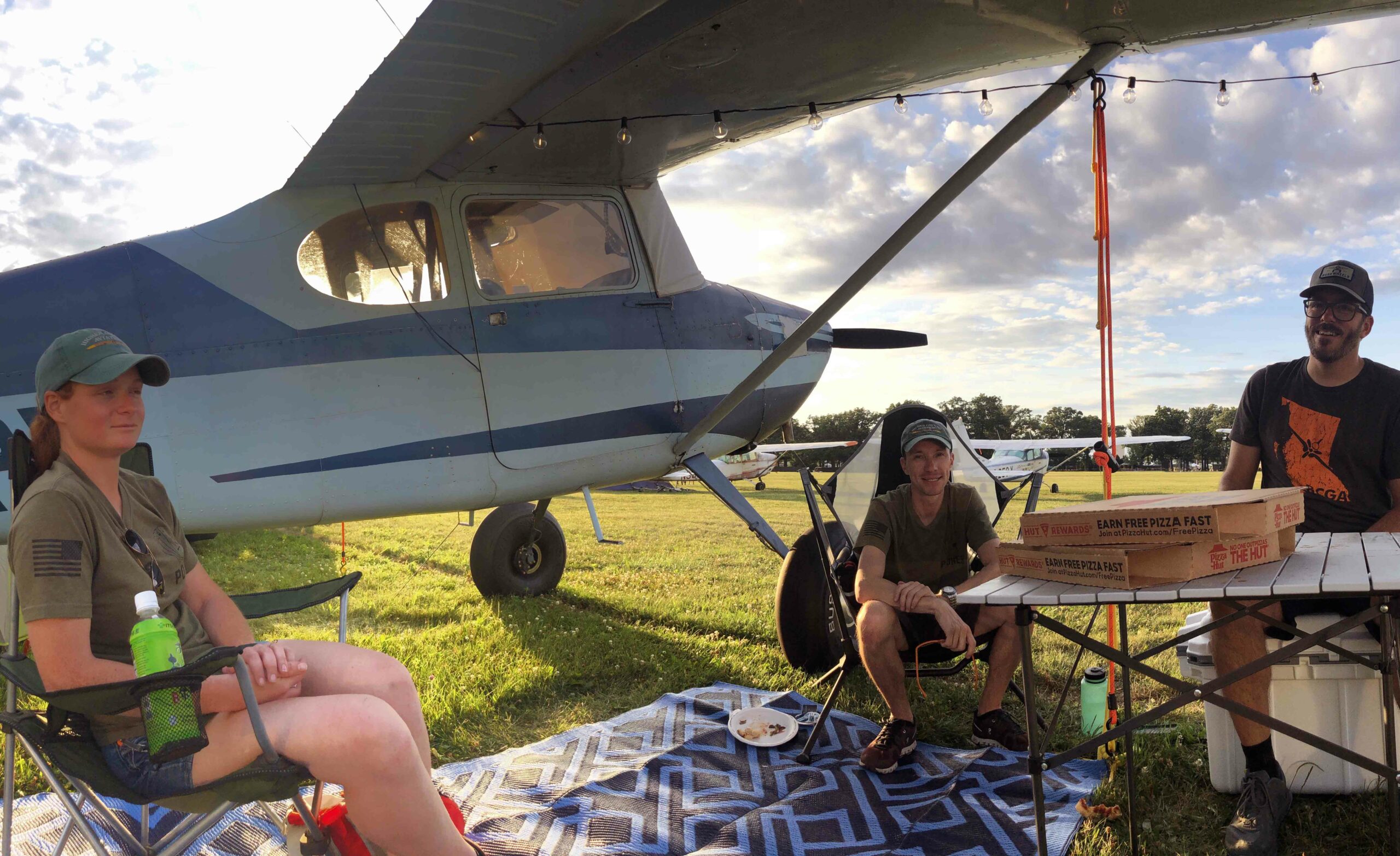 August is here and with it the depressing end of AirVenture 2022, aka Oshkosh. As we trudge back into our normal routines, we nurture sunburns, mosquito bites, blisters, and the bittersweet memories of good times with friends that we may not see for another 12 months. It’s the Monday of all Mondays, and were it not for the heavenly conveniences of indoor plumbing and neat beds, returning to normal life might be unbearable.

For me, it was an unforgettable Oshkosh for many reasons. Most importantly, it was my first time flying in and out of the event alone. I cheated a bit last year.

Having received my aircraft just a few days prior to AirVenture 2021, I did not have enough time to complete my checkout process. As a workaround, another Oshkosh based 170 owner flew his to me, traded the aircraft and then acted as PIC with me on my machine. That way I was able to camp under my own wings and we just reversed the process at the end of the week.

This year was different. Fully checked out and able to stumble in and out of most airports with what very remotely resembled skill, I was confident that I would make the round trip safely and without problems. Although I only live about 80 miles away I still had to deal with challenging weather in the form of gusty winds and I decided to leave fairly early.

After spending the first few days at a local hotel doing some work remotely, I finally returned to my amazing Vintage area lot/campground to set up my campsite. In the years before I owned an airplane, I usually drove up in my car. I parked in the parking lot of a nearby mall, hiked to the North 40 with my gear, and camped with friends next to their plane. It was fun, but nothing like flying to the event in your own plane.

Tethered to Row 66 West, just off the Beechcraft Staggerwings and almost within sight of the Boeing Plaza, my campsite was in an enviable location. With such easy access to most attractions, my plane would serve as my AirVenture base camp as well as an outdoor lounge where friends could drop by and visit. The equipment would therefore have to meet the challenge.

I made sure to pack the solar powered party lights I bought last year. Attached to the underside of my right wing, they pick up solar energy during the day and then turn on automatically when it gets dark. Combined with my newly purchased solar-powered tiki torches with simulated LED flames, an outdoor area rug to match the plane, and some comfy chairs, the space under my wing became just as inviting as a local cantina, lacking only in alcohol Music.

I did take care of drinks though. Thanks to the EAA Vintage group, a UTV regularly roams around selling ice cream cones. I brought a good quality cooler, filled it with water and tea and kept it iced so cold drinks were always available. After so many years of visiting friends’ campsites, I invited them all to drop by and help themselves in the shade and with a drink, even when I wasn’t there.

The first few days were relatively quiet. I usually woke up, brewed coffee in my Aeropress, and lounged in the shade while I watched the early arrivals taxi in and tie up. When friends showed up, they’d stop by, grab a drink, and flop into a chair to catch up. There we talked and laughed. It was my own Oshkosh porch and it was a good time.

Every AirVenture is guaranteed to be hit by severe weather at some point, and this year was no exception. A storm system rolled over Wisconsin on the Saturday before the show officially began. This system had generated winds in excess of 80 mph on the western side of the state, so it had my attention.

Like last year, I glued some pool noodles to the top of my grand piano. It looks ridiculous, but it’s a technique used by the STOL demo pilots and not uncommon in the Alaskan bush, so I’m convinced. Unlike tricycle gear airplanes, which sit with a flat deck angle, taildraggers sit with a positive deck angle and a corresponding positive angle of attack. This means that aerodynamically they are always trying to fly and are therefore more prone to pulling ground anchors out of the ground. The pool noodles act as a spoiler, disrupting airflow over the wing and killing lift.

As the storm rolled through, heavy winds battered the site. An antique taildragger was blown up on its nose, at least one log broke in half and some control surfaces were damaged on various aircraft. I later learned that the peak wind gust reached 58 miles per hour. We were lucky that the damage was so minor.

Your plane not only serves as a base camp and meeting place for friends in Oshkosh, but also serves as a study and conversation piece for other owners of this type. Fairly regularly, other 170 owners would inquire about the various modifications I had installed and discuss ownership in general. These conversations proved to be valuable conversations as tips, advice and recommendations could be gleaned from owners with significantly more experience than me.

As always, time ticked by at warp speed and before we knew it it was the end of the week. Friends began filtering out to make their journey home, usually to far flung places many states away. Being only 80 miles from home gave me more flexibility and I could afford to stay a little longer.

The wind was once again my main concern but the forecast took pity on light and manageable conditions. On Friday morning I packed my things and prepared for the chaos of departure. With the EFB in place, the frequencies on my notepad, and caffeine in my veins, I was prepared for the worst.

When I coasted, the departure taxiway was a ghost town. Somehow I was one of the few planes taxiing to runway 36L at 10:30am on Friday. I reached the end without having to wait for a single plane, made a short run-up, and was cleared for takeoff without delay.

The 36L descent requires an immediate right turn to the southeast and an elevation restriction of 1,300 feet, which at Oshkosh is approximately 500 feet above sea level. Eventually, upon disembarking, I spotted some traffic and watched a motorhome and an airplane hard at work below. Without traffic conflicts, I rolled out and made my way south.

A confused windsock welcomed me home. A wind of maybe 8 knots blew through my home airport, getting deflected and changing direction every few seconds like a pilot walking through Warbird territory at AirVenture. I wasn’t able to see the actual windsock pivots from the pattern elevation, but I suspected they must be glowing orange due to the constant movement.

As has become my tradition, my landing was completely safe and completely ugly. As I was taking off, a slight crosswind decided I would land about 300 feet lower on the runway than I had intended. With plenty of distance remaining, I simply maintained a constant deck angle, stayed coordinated, and eventually settled into a three-point stance.

Arriving home safely, I could say with confidence that Oshkosh was a success. For the first time I had flown to and from the event myself. I had successfully weathered the storm that rolled through. And best of all, I spent time with friends old and new, visiting and laughing under my wing while the sound of Ford Trimotors, Bell 47s and 10,000 other aircraft wafted across the grounds.

It was a good year and I am already looking forward to 2023.