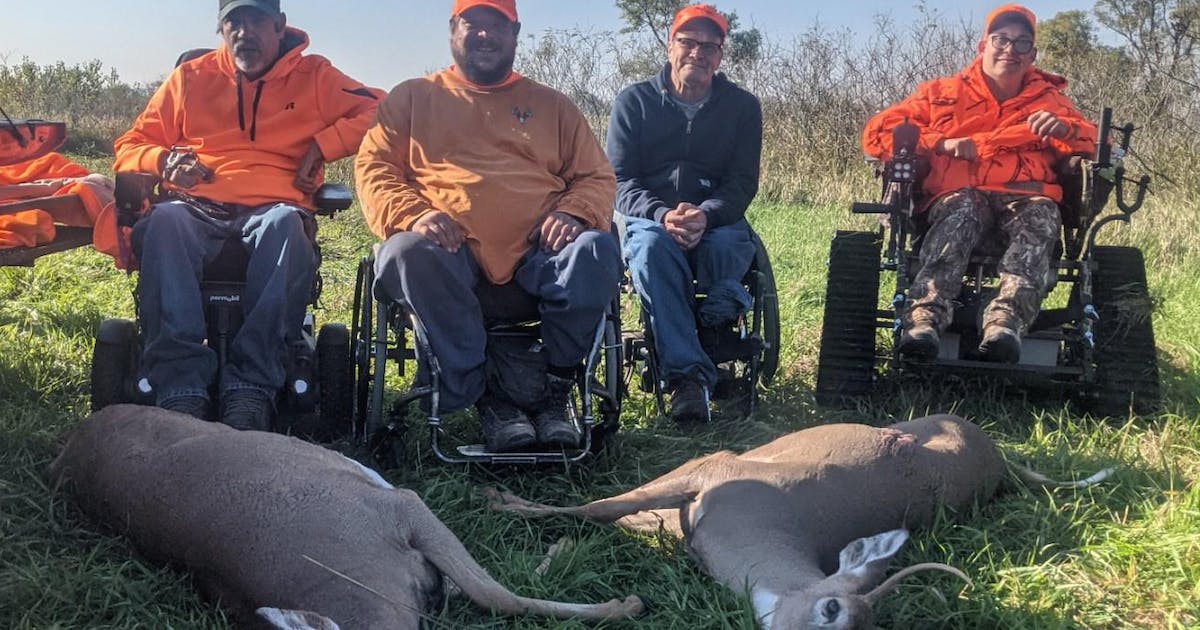 If Dean Petersen could hunt it legally as a young man, he hunted it. Sometimes he was in Wyoming or the Black Hills.

Even a car accident in 1998 that changed his body didn’t dampen his desire and interest. Maybe they even deepened.

Petersen, who is quadriplegic, still hunts vigorously, and as president of the nonprofit Capable Partners (capablepartners.org), he and his colleagues get others with disabilities to hideouts and fishing holes as often as possible.

Petersen, of Dawson, Minnesota, said the group of 250 to 300 members is roughly evenly split between those with disabilities and “non-disabled” members who show up to help coordinate Minnesota events and when needed with special hunts and Fishing assistance to make trips.

Capable Partners was founded in 1986, four years before the passage of the Americans with Disabilities Act, which this week celebrates 32 years of helping people with physical disabilities and other disabilities live better lives — including outdoors.

Organization of at least one event per month. Capable Partners’ August calendar features pontoon fishing trips on Lake Minnetonka and Lake Mille Lacs. Future events include Big Game Qualification and Gun Sighting at the Monticello Rod & Gun Club. Most of the group’s deer hunts take place in wildlife sanctuaries, he said, and in closed areas of states. The Department of Natural Resources (DNR) and the US Fish & Wildlife Service are trusted partners, he added, who offer advice and solicit feedback.

“Although I’m looking for help myself,” Petersen said, “it’s gratifying to find other people out there who need help.”

Here are two additional options in nature for people with physical disabilities:

Beginning this spring and into the summer, several state parks have built special chairs to bring people with physical disabilities to parts of their grounds that previously might have been out of their reach. The pilot could be expanded depending on user demand and experience, the DNR said.

Five state parks — Camden (Lynd), Crow Wing (Brainerd), Lake Bemidji, McCarthy Beach (Side Lake), and Myre-Big Island (near Albert Lea) — have special action trackchairs that operate on tank-like tracks , which allow riders to easily roll over varied terrain – opening up the possibilities in the parks. A sixth will be available in the fall at Maplewood State Park in Pelican Rapids. The chairs, made in Marshall, Minnesota, cost about $14,500 each.

Chairs can be reserved free of charge by calling the park offices.

Camden park manager Bill Dinesen said there are about 3 1/2 miles of trail for users to explore using the trackchair. A current hurdle is logistics, he said: having staff available to train users after they reserve a day to try out the chair. Another is finding ways to bring the trackchair deeper into the park and closer to some of its natural amenities.

However, the interest is evident: inquiries have increased, he said.

“I think the time is coming that eventually we’ll be more… that’s a good thing,” he said.

A new unit in the mountain biking and paddling mecca on the edge of the Iron Range draws all visitors.

The Sagamore Unit in Riverton, Minnesota and within the Cuyuna Country State Recreation Area has a 7.5-mile trail that is accessible to riders with disabilities, some of whom may use handbikes. The unit, which opened in June, also includes a rally center with transfer stations, a picnic area and about 15 more total miles of trail.

As expected, the new bike-friendly trail appeals to everyone, regardless of ability.

Many families have tried the trail, which at 4 feet wide is wider than the traditional singletrack synonymous with mountain bike trail systems.

“Even for people who are a bit scared because of the narrowness [single track trails] are expanding their experience,” said Barry Osborne, Recreation Area Manager.

Aaron Hautala is a member and past president of the Cuyuna Lakes Mountain Bike Crew, stewards and advocates who have helped guide the development of the trail system.

Hautala has written a grant application with the City of Riverton for the customized path of unit development. The state’s Iron Range Resources and Rehabilitation Board gave $303,000.

Hautala said Sagamore is “that fresh canvas” to work with the idea of ​​creating an adaptive path as an anchored tenant.

“[Sagamore] looks great,” he added, “and I hope for adaptive drivers it’s their driving center.”