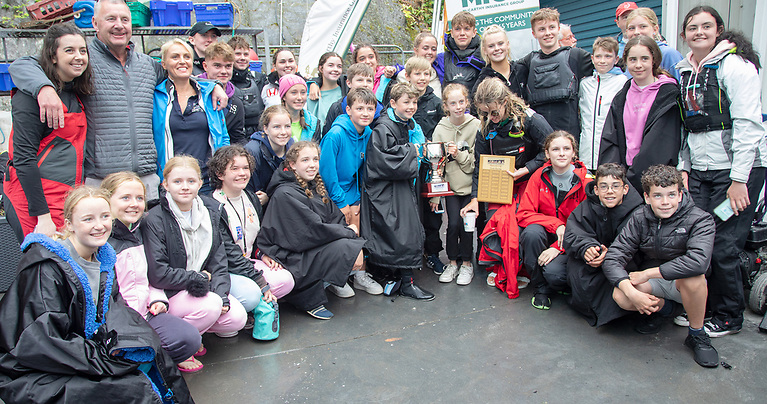 Over 50 hard-fought and dedicated sailors took to the water at the Marconi Cup in Glandore. Photo: Kathleen Hayes

The Marconi Cup consists of two events, a relay race and a team event. The team event is a round robin race format around a digital N course and the winner of the regatta will be determined based on the combined results of these two events. The current owners, Crookhaven, were keen to retain the title.

The organizers were particularly pleased this year to have two official team judges present to judge the event, Eunice Kennedy and Dave Sheahan. They had their work ahead of them with over 50 hard-fought and dedicated sailors on the water.

The weather was closely monitored in the days leading up to the event with a southerly wind of 28kn to 44kn which would hit the harbor in time with the first gun and the possibility of a small boat warning being in place. The Race Committee met Friday night and a morning weather window was identified. The race briefing was brought forward to 8am, with First Gun at 9am. 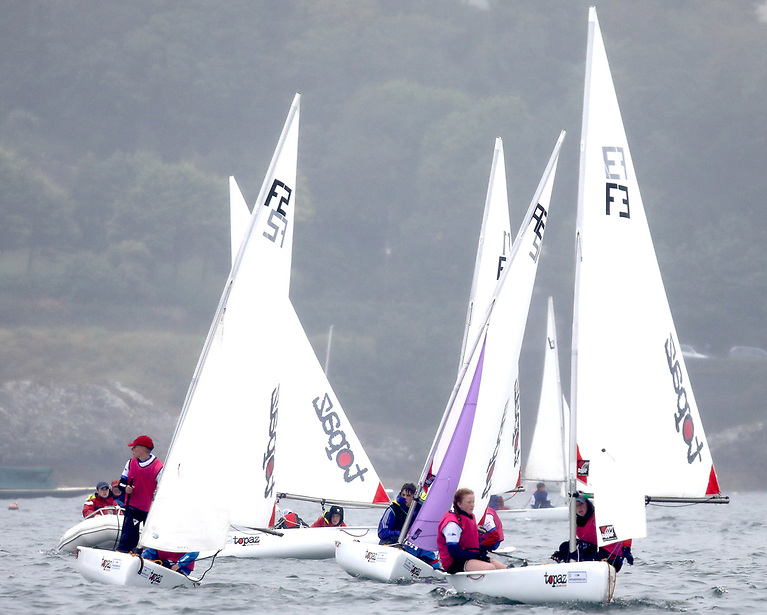 With the regatta briefing and safety briefing completed, the sailors hit the water and the relay race was in order at 09:15. Home field advantage proved a winner for GHYC as they led the race from the start. Two good crew changes on the pontoon helped them take the gun and eventually the lead in the regatta.

Next up was the round robin team races. Overall results saw Crookhaven 1 come out just ahead of the Baltimore Bulls, then teams GHYC Adam and GHYC Eve separated by a hair’s breadth, followed by the Nauti Bouys (Bantry Bay Sailing Club) with the second Crookhaven team bringing up the rear. 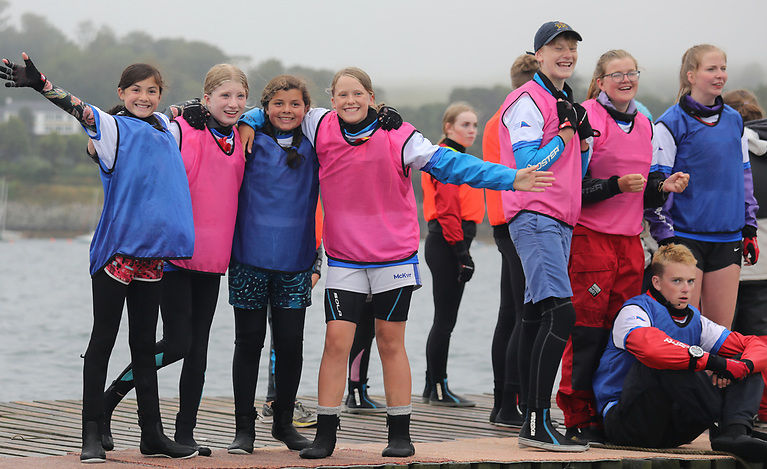 Unfortunately, the last two team races were canceled for safety reasons when the weather window closed and all sailors were ordered ashore. The race officers and judges retired to calculate the results and after de-rigging the sailors were all welcomed to the GHYC clubhouse where a BBQ was a welcome way for participants and sailors to warm up and reflect on the morning’s regattas to discuss.

After everyone dried off and the race committee reviewed the results, GHYC Commodore Tim Forde began the awards ceremony. He started by thanking the incredible organizing committee for the event, especially as this was the third year GHYC had attempted to host it only to have been hijacked by Covid for the previous two years. 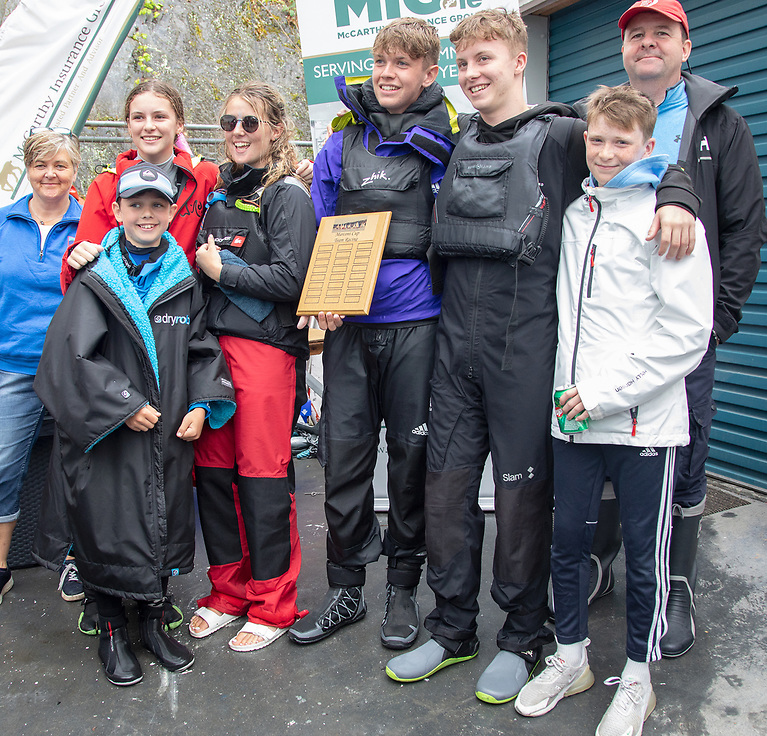 A special mention went to Harriet Emerson, GHYC Dinghy Captain who put countless hours into making the event such a success and a big roar from the GHYC team followed. Tim also thanked the two umpires, Eunice Kennedy and Dave Sheahan, for traveling to Glandore for the event. The Baltimore Sailing Club were then awarded the Sportsmanship Award, GHYC won the relay race and Crookhaven Sailing Club were awarded the trophy and crowned the 2022 Marconi Cup Champions! 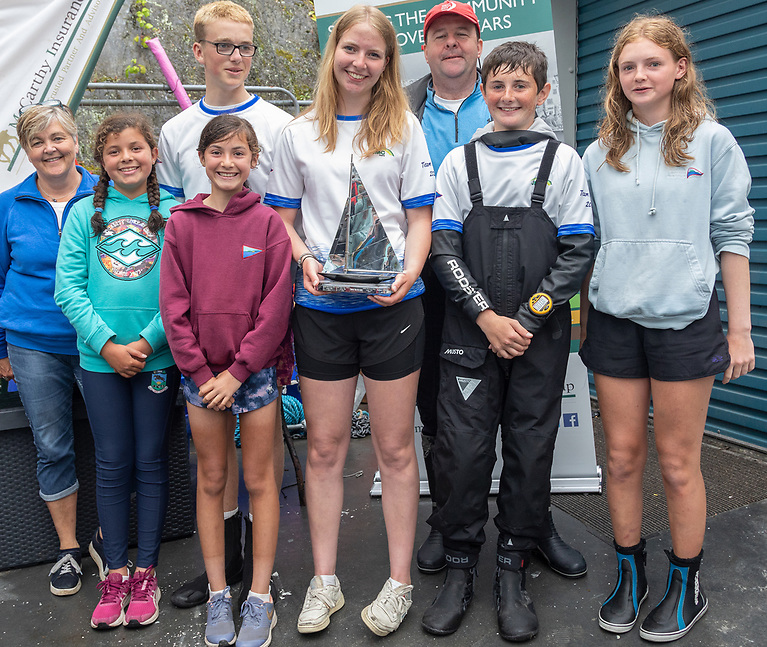 The race judges were impressed by the good and at times very good tactical team racing of the West Cork sailors. They also commended GHYC for the smooth running of the event and the teamwork of the organizers which resulted in such a successful, competitive and fun event in very challenging weather conditions.

Despite the terrible weather conditions, everyone left Glandore full tummies and happy after a successful morning race and already looking forward to Marconi 2023 which will take place at Crookhaven Sailing Club.

History of the Marconi Cup

The Marconi Cup was created by Crookhaven Sailing Club in 2001 to bring local sailing clubs together and is now a major summer club event for all West Cork junior sailors under the age of 18. The regatta is named after the famous Italian Nobel Prize winner Guglielmo Marconi, who pioneered the development of radio transmission. In 1919 he succeeded in making the first transatlantic wireless telephone call. Previously, Marconi had developed his technology using beacons on Fastnet Rock and Brow Head near Crookhaven. Such was the monumental importance of Marconi’s work in West Cork that it is likely that if only the ship had sent out a wireless distress call using Marconi’s invention, no one would have survived the Titanic disaster.