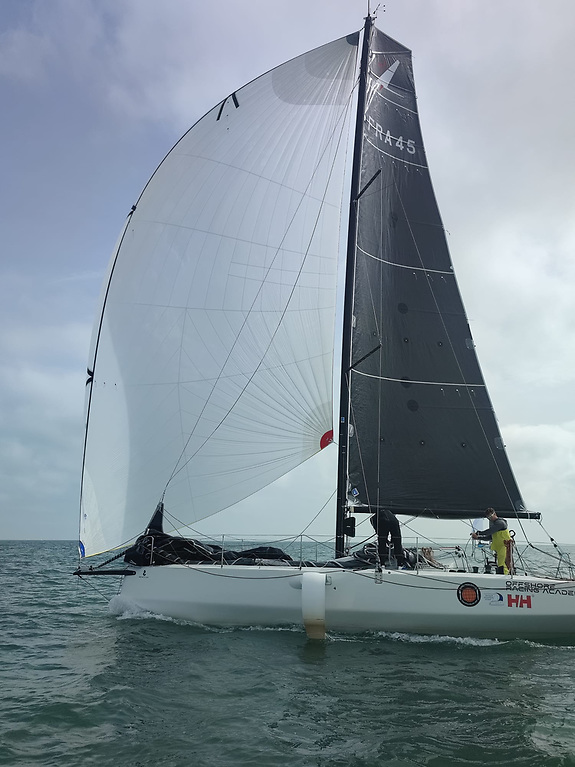 Another month has passed in France, UK and Ireland with projects, programs and lectures in all countries, all dedicated to offshore yacht racing, learning and development.

March kicked off with the Classe Figaro Academy practice race, a full report of which can be read here

Essentially, it was incredibly windy as Kenny Rumball and Timothy Long secured 5th place in two races! When we say windy, really windy, 35-40 knots coming off the start line, watch a video below of what the first 12 hours of the race was like:

Shortly after this race there was a move to Port la Foret to help a new Irish JPK 10.30 with father son duo Justin and Nathan Burke! Enough of what I have to say, here is Justin Burke’s take on the few days I’ve spent with them and some sessions we organized outside…

Most club sailors see racing as part of their training, but to train effectively you need a coach. Coaching brings structure, knowledge and focus. A coach also brings with them a measurement/review structure that is rarely done professionally after the race. When you lose the race, no one wants to indulge in the blame game, and when you win, it goes to the bar.

Having raced FF15’s and SB20’s for the past 2 decades I recently purchased a cruiser racer boat. In addition to the new Passage Racing format, I was confronted with the latest electronics. I compared it to pressing button A in a public payphone 20 years ago and then being handed the eventual iPhone and expecting to learn on the hoof. You can learn by trial and error if you have the patience and time. But at some point you will realize that sailing is one of the few sports that does not have a strong and broad infrastructure for coaching. Organized by the Offshore Racing Academy, Christian Dumard provided an excellent tutorial on using Windy and learning what weather to expect during your crossing. We also received an extensive session on using Adrena, the most advanced race navigation software, and in connection with this we received a course on NKE hardware, including racing with the Autohelm. We couldn’t have solved this without professional help. We received coaching on the water which included the NKE and Adrena navigation system the whole time. All 3 together was a challenge as it’s easier to think you can race at the seat of your pants, but when you see what the pros use you see there are more options. We also received a verification of the calibration of the equipment and boat construction. All I can say is that what you don’t know won’t hurt you, but it will lose you the race.

Shorten the learning curve, get coached and enjoy the new knowledge. It might even help your results.

Whilst in Port La Foret we spent an evening with our first series of talks ahead of the Irish Offshore Circuit for 2022 and hosted an introductory evening to offshore sailing. This introductory talk was intended to break down and simplify some of the barriers and misinformation about offshore sailing. We were overwhelmed by the registrations with 120 registered interested parties and 101 participants in the online lecture! A great two hours with lots of interesting questions and evidence of the great interest in offshore racing in Ireland!

With little to no rest, it was off to the UK for a weekend of training, back to the world of IRC! It was certainly a step back into familiar territory for Kenneth as he sailed back aboard a boat with 5 other people on board! Two 30-mile races Saturday and Sunday, more on that in the coming months!

Back to France for one of the last weeks of training ahead of the upcoming Solo Maitre Coq…. We were back in La Rochelle for four days of sailing and mainly focused on testing the sails of the different sailmakers options! We had test sails from North Sails, Delta, Incidence and Technique Voile. An extremely interesting week allowing our training group to sail with and examine the changes in designs for 2022. This allows us to make informed decisions about our sail choices for the upcoming season and our focus, August’s Solitaire du Figaro! Don’t worry, it’s not always hard work, we treat ourselves every now and then, see below!

To say we squeezed in a lot would be an understatement, so at the end of the month we had a very welcome return to Ireland! To top off the month, we had our second seminar with world-renowned weather router Christian Dumard, who demonstrated the tremendous benefits of Windy.com and how to make the most of it for offshore racing. Once again we had phenomenal turnout with over eighty people signing up for the course on our website.

Next up is the Solo Maitre Coq in April, we’ll be giving a full report on the race once we’ve finished but to give you a taste of what’s to come…

The first event of the 2022 Figaro Bénéteau class season, the Solo Maître Coq, will be held this year from April 15th to 24th in Les Sables d’Olonne, the same port where the Vendee Globe starts and finishes. This year there is a major change as the long offshore race will be held before the inshore courses to better reflect current events and the return of the Fair-Expo to the Vendée Globe course between April 21st and 24th . 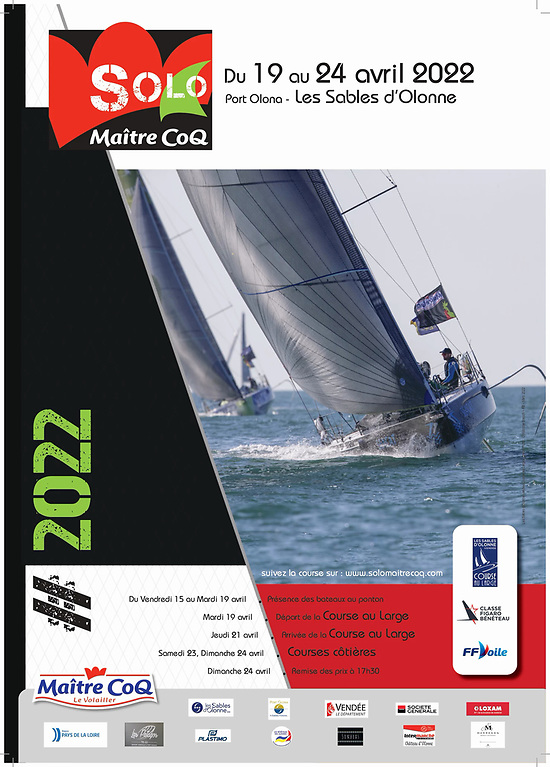 The Grande Course takes skippers around the islands of Ré, Yeu and Belle-Île. This long offshore course runs north and then south again for about 240 nautical miles. This race is expected to require skippers around three days at sea to complete the course.

Then, for two days, the skippers will compete on two short courses of approximately 30 miles in the bay of Les Sables d’Olonne, giving spectators the chance to see the offshore boats and sailors compete close to shore!

This year there will be three Irish competitors in the running. Tom Dolan will be back on this course for his fifth round while Kenneth Rumball will be on his second attempt. New for 2022 is Conor Fogerty, a well-known and proven offshore sailor! The full list of sailors can be found here